For the second consecutive game, scoring chances were hard to come by for both the Sharks and their opponent. And for the second consecutive game, the Sharks earned the lion's share of the opportunities that were created. Nashville came on strong in the third period but rarely touched the puck for much of the first two. To their credit, the Predators were able to prevent the Sharks from turning their massive possession advantage into a similarly overwhelming advantage on the chance count. Still, things were ugly for Nashville after forty minutes, with the Sharks having outchanced them 10-4 at that point. San Jose went on to win the chance battle 15-7 en route to a 2-1 victory via coin flipping.

Holding your opponent to 12 scoring chances in a game is usually something to be proud of. The Sharks have held their last two opponents to a total of 12 chances. As much as randomness is probably going to dictate whether or not the Sharks make the dance, it's hard to imagine they'll find themselves out of the top eight if they continue to play as well as they have these past two contests. 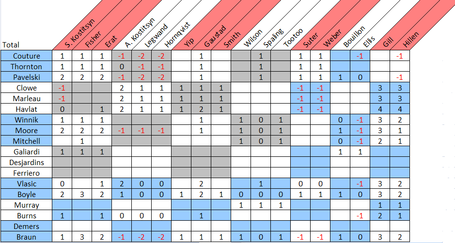 Thornton's ice time was more or less evenly distributed between the Mike Fisher and David Legwand lines for Nashville and you can see how he, Pavelski and Couture fared in those respective matchups. Nashville has had their struggles with puck possession this season and, in my humble opinion, I think a lot of that has to do with Barry Trotz inexplicably misusing his lineup.
Far be it from me to criticize the strategic decisions of one of the longest-tenured coaches in the league but he's absolutely thrown Mike Fisher to the wolves this season while giving David Legwand generally easier matchups. Fisher's two-way play has always been rather overrated while Legwand has a proven track record of success against the toughs. Presumably the addition of Paul Gaustad should help ease the burden on Fisher but simply swapping the roles of Fisher and Legwand at least seems like it could improve the club's woeful underlying numbers. Doubly so if Alexander Radulov ends up coming over - you definitely want him to get protected usage and it seems like Fisher makes the most sense as his center.