A frequent contributor over at The Copper & Blue who goes by the internet handle dawgbone98 left a terrific comment on an mc79hockey.com article earlier this year. It resonated with me at the time but I forgot about it until Cam Charron quoted from it in his analysis of the Boston Bruins' recent swoon. The pertinent portion of the comment is this:

[Momentum] also just happens without a triggering event. People continually look for events that might have caused a change. Often times in Hockey it’s not a goal or a hit that swings "momentum" (which is just another word for carrying the play), but rather the natural progression of a game featuring 2 teams who are at similar level in terms of ability.

It's hard to find better words to describe what almost always transpires when the San Jose Sharks and Detroit Red Wings do battle. Mostly because it's difficult to find two teams in the NHL who are more similar in terms of ability. Last night's affair was another instant classic of a game that harkened back to the epic Game 7 these teams played last spring. A ticket to the conference finals wasn't on the line this time but discrete segments of "momentum" were very much apparent with the teams trading stretches of time in which they dominated possession and generated chances. The Sharks registered the first 6 scoring chances of the game, with the Red Wings responding with the next 4. San Jose created the 4 chances after that; Detroit the succeeding 3.

The Sharks ended up outchancing Detroit by a significant margin, 21-11 at evens and 24-13 overall. Martin Havlat was fantastic again, with a second straight +4 night by the chances (and that's without his first goal counting as a chance). The third line was phenomenal as well - when all three were on the ice together in this game, Daniel Winnik, Dominic Moore and Torrey Mitchell did not yield a single scoring chance against, keeping the puck in the right end of the ice all night. These last three games are as good as the Sharks have looked based on the chances all season long. Here's hoping they keep it up. 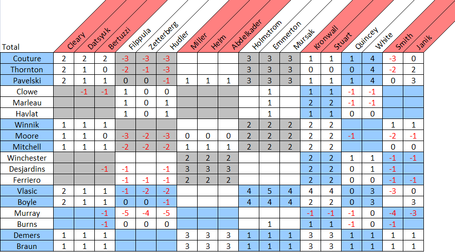 Pavel Datsyuk will get the press clippings for his zero-angle goal (and deservedly so) but Henrik Zetterberg was the better Red Wings forward in this game. He didn't lose any of his matchups and his well-timed and uncalled pick on Marc-Edouard Vlasic created the tying goal that secured Detroit a point in the standings. The top line had their most successful shift early in the game when McLellan was somehow able to get them out against the Wings' joke of a fourth line.

The percentages haven't been there for Zetterberg this season but he's still been the one driving results up front for Detroit as always. If only the Wings were run by Scott Howson, the Sharks might stand a chance of trading their delicious doorstop Michal Handzus for that crummy old danish Zetterberg.