A Look at the Sharks Through the Lens of a Microscope

Share All sharing options for: A Look at the Sharks Through the Lens of a Microscope

What a win last night! The Sharks continue to find a way to put the puck past the Red Wings, which many teams this year have struggled to do. Maybe McLellan's time with Detroit has given him the anti-dote, or perhaps the Sharks are just built to match up well with Detroit. Maybe the players just get up for these games. For whatever reason you've got to love the the energy. For the first time in a long time the Sharks wake up today leading the Pacific in the potential points category and favorites to win the Pacific. But as Drew and Randy often say, (and who am I to disagree?) you have to earn those points. I'm going to try to keep things short and sweet today, and let the data do the talking.

Towards the end of my last post I addressed the oft comment that the Sharks make other goalies look good. I also suggested that the Sharks 'road trip that shall not be named' might have been due to turtling with the lead. I decided to micro-analyse this aspect of the Sharks game. Were dealing with very small samples here, baby aisle stuff. As always keep your logical hard hat on, especially when looking at data that's been spliced and diced this thin.

The first thing that jumped out at me has been the disparity between home and road. This should ring warning bells for all of you as it is very rare for teams to forget how to play hockey over these splits. I'll first split the sharks away games by score to give you a feel for what I'm talking about.

The graph above shows the Sharks' cumulative CORSI% split by score. As you can see the sharks have been playing way below what is expected. Generally teams drop their possession stats by about 2-4% for each increment in goal differential. The Sharks, however, drop their CORSI% by about 8%. Let's take a look at the up 1 data more closely.

Here we see some trends emerging. In the beginning of the year the Sharks were clearly struggling in this aspect. Not only were they struggling, but they were heading in the wrong direction. The 'road trip that shall not be named' definitely took its toll on the sharks while leading, as their underlying numbers while tied and down 1 stayed relatively consistent. The good news is that this has been reversing. This could be due to recent personnel changes, but I think McLellan still leans heavily on his top line in all (including up 1) situations. I'll concede it helps to have a few more shut down skaters out on the ice. Below is a table of CORSI% with the sharks leading in away games, all of which is mentioned above comes through.

Now let's really bust out the electron microscope and look at player data while up a goal. Below I've color coded the individual sharks stats, splitting up the data by home/road, F/D. Teal represents leading the team in CORSI and TOI/G, while orange represents bring up the caboose. Remeber to keep Zone starts and CORSI rel in the back of your mind while observing the data. 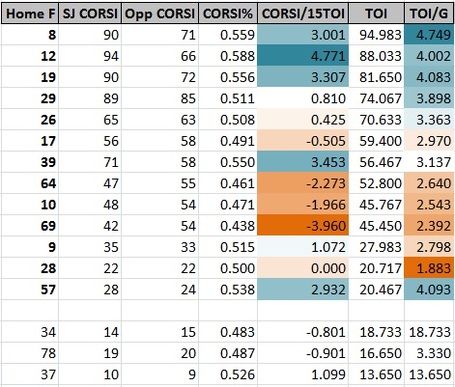 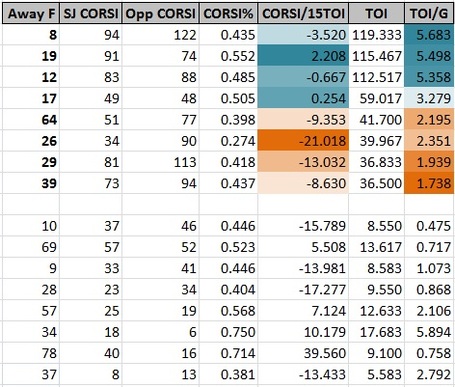 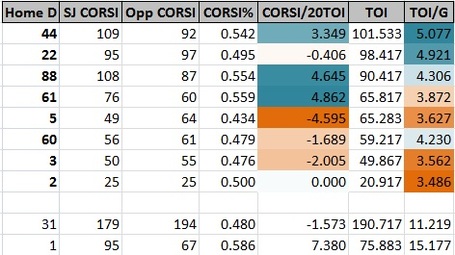 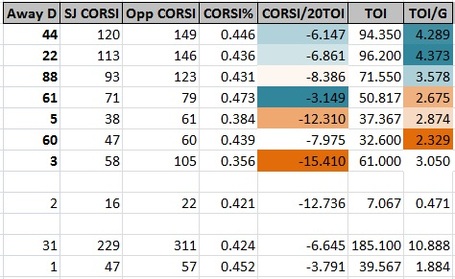 You can ID players by their number in the first column on the left. I decided to use CORSI/15TOI and 20TOI for forwards and defense respectively. This is a bit unconventional, but it goes to show you how much of an impact a player can have on the game. Instead of using 60min TOI, we get down to the actual TOI for an average player at that position. I also excluded some players from the color coding scheme with not enough total TOI to warrant analysis. I provided data, but it's going to take a little bit more time to come to any conclusions. Winnik, for example, is trending well but probably needs a few more shifts while leading to give us enough data to come to any conclusions.

From this data you can also clearly see why DW was searching for defensive depth at the deadline. Zus was brought in to help stabilize a serious checking 3rd line, and although his home data is decent, his road data is abysmal. Moore and Winnik should certainly help this area. They're not going to create any seismic shift in the data, but hopefully they can reduce some of the time and zone starts the top line receives.

So there you have it, feel free to ask plenty of questions in the comments if anything is unclear.