Sharks turn in a stinker, lose to Anaheim 5-3

Share All sharing options for: Sharks turn in a stinker, lose to Anaheim 5-3

As far as opportunities go, this seemed like a perfect one for the Sharks.

Skating on home ice, San Jose had the chance to regain control of the Pacific Division by beating a terrible Anaheim Ducks team (albeit one that's improved under Bruce Boudreau) playing the second night of a back-to-back and icing a goaltender so bad he was dumped by the Edmonton Oilers organization and sits behind Dan Ellis on the depth chart. All they needed to overtake Dallas and assume first place in the division was a decent, unspectacular effort.

What they produced was probably their worst game of the season. The Sharks put up a clinic in how to continually lose defensive zone puck battles, botch zone exits and turn the puck over while attempting to move through the neutral zone. As a result, they were outchanced 15-10 at even strength (18-15 overall, summary after the jump), outshot 40-30 (34-21 prior to score effects taking hold in the third period) and lost 5-3 in a game that should have been a slam dunk.

There aren't many positives to take out of this game if you're the Sharks. One might be the recent play of Martin Havlat (so hot right now, Havlat) who recorded his second straight two-point performance and was one of only three Sharks forwards - along with Daniel Winnik and Andrew Desjardins - in the black by the chances. But even he was largely contained by the Ducks in the game's final forty minutes as Anaheim gave the Sharks a taste of their own medicine with a dominant possession game followed up by a bevy of odd-man chances when the Sharks repeatedly turned the puck over high in the third. Breaking down everything that went wrong in this one for San Jose is a futile task because just about everything went wrong.

Perhaps the one other positive is the fact that they'll have the chance to get right back at it tomorrow night in Los Angeles. Despite the blown opportunity to claim the division lead, the Sharks are very much still in the hunt. Since someone unfortunately has to win the Phoenix/Dallas game tomorrow, the Sharks won't find themselves in first place regardless of their result in Southern California on Tuesday. But what they need now is points and they won't get them playing as pitifully as they did against Anaheim.

Ten games left and they all might as well be playoff contests considering their significance. Which should theoretically favor a team with as much playoff experience as the Sharks. Let's just hope they draw from the "Round 1" batch of their experience instead of the segment marked "Conference Finals" likely buried in the darkest recesses of their collective memory. 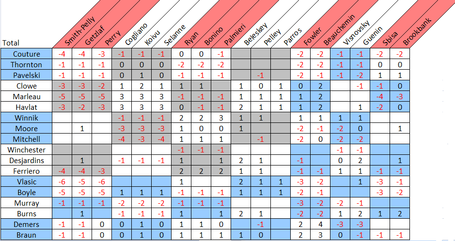 Ryan Getzlaf ate everyone's lunch. McLellan was obviously not pleased with the Thornton v. Getzlaf matchup and swapped Joe Pavelski and Havlat sometime during the second period, opting to deploy Marleau and Pavelski against the newly-minted GPS line instead. That didn't work out so well either.