A combination of score effects, the Sabres having played the previous night in Anaheim and the reunion of the Marleau/Thornton/Pavelski line earned the Sharks a 9-4 advantage in third period scoring chances and a 13-5 lead in the chance count over the game's final forty minutes. They just weren't able to put one past Ryan Miller. The real concern for San Jose in this game was their play in, by process of elimination, the first period where the Sabres carried much of the play with several neutral zone turnovers by the Sharks catering to Buffalo's transition attack.

At the request of Matt Taylor, I began tracking "chance types" tonight, a project I was originally planning on putting off until the start of the playoffs. Matt was primarily interested in quantifying the increase in team speed for the Sharks following the deadline acquisitions. Transition and odd-man opportunities seem like a reasonable proxy for this, as are zone entries which the gang at Broad Street Hockey track for the Flyers.

I went a step further (in terms of chance types, not zone entries...that shit is time-consuming!) and classified each scoring chance for both teams, notated above in the chance summary. T is for transition chances (i.e., chances immediately following a zone entry), O for odd-man rushes which are obviously transition opportunities where the attacking team has more skaters involved in the play than the defending team, R is the self-explanatory rebound category which supersedes all others with the exception of PP chances (a rebound created off a transition, for example, is only counted as a rebound chance and not a transition chance), F for chances generated as a direct result of the attacking team's forechecking, P for chances created by offensive-zone possession, S for "steals" which are chances directly following an own-zone giveaway by the defending team and, as always, PP for power play chances and SH for shorthanded chances, which I didn't feel necessary to slice any more thin.

It goes without saying that it will take many games for this data to have any statistical value in terms of analyzing trends and I'm sure I made more than my fair share of errors distinguishing between some of these tonight that hopefully I'll be able to minimize going forward...but I definitely think some interesting stuff can be parsed here. The more data the better and even with tonight's game I think some important things emerge here - the Sharks just weren't getting any sort of "puck luck," as Mike Babcock likes to call it, around the net with regards to generating shots off rebounds. They were also extremely aggressive on the forecheck with Tommy Wingels alone generating two point-blank Ryane Clowe chances with his work in that area. Four of those six "possession" chances were the result of Marleau/JT/Pavs' territorial dominance in the third period. 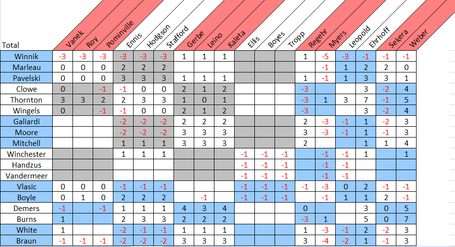 Daniel Winnik followed up his outstanding debut in Teal with a bit of a dud in this one but he was once again matched up against the opposition's best, with over 7 of his 11 minutes of EV ice time coming while Derek Roy was on the ice for Buffalo. The line combinations that started the game more or less went out the window with the Sharks pressing in the third period and the reunited top line were effective across the board when that happened.