The Sharks were outchanced 10-1 in the second period of this game, spending nearly the entire twenty minutes in their own end. I don't have period-by-period scoring chance numbers handy for the full season, but I'm pretty confident in saying that's the worst single-period chance differential they've posted all year long. I called Monday's 5-3 loss to the Ducks probably the Sharks' worst game of the season but I think this one tops it. San Jose was outchanced 16-9 at even strength and 23-11 overall. I'm not sure what makes an NHL team follow up a three-game stretch that featured some of their best hockey of the season with consecutive terrible efforts but hopefully it's something that can be reversed. And quickly. 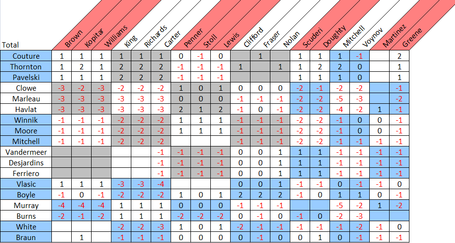 Martin Havlat and Ryane Clowe helped set up the Boyle goal but apart from that play they, along with Marleau, were black holes in this game. The only positive here is that the Thornton line managed to stay in the black playing heavy minutes against the Kopitar line for L.A.