Talk about a schizophrenic team. The Sharks seemed just about dead in the water after extremely poor performances against Anaheim and Los Angeles earlier in the week but they were excellent in this one, holding the Bruins to just 7 total scoring chances while generating 11 of their own. The hope is that the two-game stretch against their Southern California rivals was just an anomaly but the reality is it's uncertain which Sharks team is going to show up the rest of the way: the one that outchanced Boston, Detroit, Nashville and Calgary by a combined 63-32 count over the past week or the team that was dominated on the chance count 41-26 by the Ducks and Kings? We'll find out over the next two weeks. 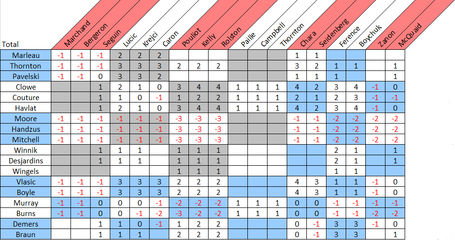 It's probably not a coincidence that the Dominic Moore and Torrey Mitchell's worst game in months came with Michal Handzus, the Sharks' worst possession player, back in the lineup and on their unit. Another spectacular game for Havlat by the chances as his line spent the bulk of their shifts on the ice against Milan Lucic and David Krejci for Boston and won that matchup, as did the Thornton line.