One minute into the second period, the Phoenix Coyotes had a grand total of three scoring chances in this game. They also had three goals.

Fortunately, the Sharks were resilient enough to rebound from a pair of cripplingly ill-timed Phoenix tallies as Derek Morris tied the game 2-2 with six-tenths of a second remaining in the first and Lauri Korpikoski restored the Coyotes lead by converting a Ray Whitney centering pass 49 seconds into the middle frame. Although the teams largely traded chances for much of that period, a Daniel Winnik goal re-tied the game for San Jose who came on strong throughout the third period and into overtime.

The Coyotes initially got on the board six and a half minutes into the game as Michal Handzus blew his coverage of Daymond Langkow, allowing the veteran center to comfortably accept a pass from Gilbert Brule in the slot that he snapped past Antti Niemi. Patrick Marleau tied the game a little over a minute later as his dogged pressure of Korpikoski in the Phoenix zone forced a turnover onto the stick of Thornton who found Marleau to make it 1-1. The top line wreaked havoc in the 'Yotes end once again later in the period and it resulted in a Brent Burns marker that gave the Sharks their first lead of the night that was summarily squandered in a matter of less than a minute distributed across two periods.

Winnik evened the score four minutes after Korpikoski's goal with his second tally in as many nights. The deadline acquisition was an integral part of what was probably the Sharks' second-best line as he skated on the wing with Andrew Desjardins and Tommy Wingels. If Winnik can continue to provide offense in addition to his unmatched contributions on the forecheck and his uncanny ability to win the neutral zone, it would be an absolute boon to the Sharks during the home stretch.

Joe Pavelski, who's been the team MVP all season long in my estimation, had another outstanding night. He was a team-leading +7 in chances, +11 in Corsi, +2 in traditional plus-minus, a ridiculous 11-2 in the faceoff circle, picked up an assist and reunited four more lost dogs with their owners between periods to boot. It's been a treat to watch Pavelski evolve into one of the best two-way players in the NHL in front of our eyes this season (although, really, he's had a legitimate claim to that moniker for each of the past three years before this one as well) and his demonic possession skills and three-zone dominance generated several opportunities that could have ended the game well before the coin flip session.

It wasn't a perfect game by any means; allowing the Coyotes, a team the Sharks are in direct competition with for both the division lead and one of the final two playoff spots in the West, to gain a point in the standings is definitely not ideal. Blowing five power play opportunities (on which they generated just three chances combined) obviously stinks. Yielding that late Phoenix goal to close out the first courtesy a mental mistake by Marc-Edouard Vlasic is tough. The fact that Logan Couture and Martin Havlat were basically M.I.A. at even strength in this game also can't feel great. But the Sharks earned this victory, outchancing Phoenix 17-11 overall and 14-11 at evens (full chance summary after the jump) and, ROW implications aside, picking up two points in the standings was what they set out to do tonight and, well, mission accomplished. 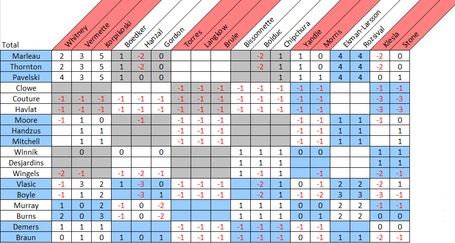 McLellan obviously wanted the Thornton line out against Ray Whitney as much as possible and it was a good plan; Joe, Patty and Pavs slaughtered Whitney and company on the chance count. Really disappointing game from the second line, although Clowe was in the dressing room for a good deal of it. They lost every single one of their matchups and while playing a decent amount of time against two-way force Martin Hanzal had a little to do with it, they were just as bad against everyone else Tippett threw at them. Hopefully this doesn't become a recurring theme.