Share All sharing options for: Woo Rewind - Sharks fall out of playoff race again and Mike Moore gets suspended

Last week, the Worcester Sharks failed to take advantage of their games in hand by losing both of their games and dropped to 13th place in the standings, four points behind the Syracuse Crunch for the eighth and final playoff spot in the AHL Eastern Conference. With 11 games remaining, the Sharks are 28-26-4-7 with 67 points

On Wednesday night {March 21}, the Sharks traveled to the Times Union Center in Albany, NY, to play the hosting Albany Devils in their third meeting of the season and were defeated 6-5.

Devils forward Brad Mills gave the Devils an early 1-0 lead with a power play goal, his fifth goal of the season, at 3:09 of the first period. With Sharks forward Marek Viedensky in the penalty box for interference and the puck inside the Sharks zone, Devils forward Mattias Tedenby sent a pass from on top of the right face-off circle over to Mills, who fired a one-timer on net from the top of the left slot that beat Sateri on the blocker side for the goal.

Devils captain Stephen Gionta extended the lead to 2-0 with his fourth goal of the season at 7:03. Rushing into the Sharks zone 2-on-1 down the right side, Mills skated into the right face-off circle and passed the puck over to Gionta, who from near the goal line, roofed the puck over Sateri as Sateri tried to stack the pads.

Just 1:55 later, Devils forward Myles Stoesz made it 3-0 with his first goal of the season off a slap shot of a bouncing puck from inside the right face-off circle that hit off the skates of Sharks defenseman Sena Acolatse, who was positioned on top of the crease, and went through the pads of Sateri for the goal.

Looking to inject some life into the Sharks, Frazer McLaren dropped the gloves with Stoesz on the ensuing face-off. The near 30 second fight saw McLaren land several hard shots on Stoesz before being separated by the linesmen. The fight was McLaren's fifth of the season and lifted McLaren passed Brad Staubitz as the franchise leader in penalty minutes with 466.

38 seconds later, Sharks forward Brandon Mashinter dropped the gloves with Devils defenseman Eric Gelinas after Gelinas drilled Viedensky with a dirty hit from behind on the the left end board of the Devils zone. Mashinter wasted no time in getting a hold of Gelinas and Mashinter proceeded to toss Gelinas around like a rag doll for nearly 10 seconds. The fight was Mashinter's seventh of the season.

Irwin got the Sharks on the scoreboard with his ninth goal of the season at 10:11. Entering the Devils zone on the right side, Kennedy threw a backhanded shot on net from the right corner that Lucia got a piece of in front but was stopped by Devils goalie Keith Kinkaid. Irwin crashed the net and was able to slam the puck home on the rebound from on top of the crease for his first goal in his last 40 games.

The Devils regained their three goal lead as Tim Sestito scored a power play goal, his eighth goal of the season, at 13:42. With Sharks defenseman Matt Pelech in the penalty box for tripping and the puck inside the Sharks zone, Devils forward Vladimir Zharkov sent a pass from on top of the right face-off circle down to Sestito, who was positioned on the goal line. Sestito quickly sent a pass across the crease that hit off of Sharks defenseman Nick Petrecki, who was crouching down on top of the crease, and went through the pads of Sateri for the goal.

Pelech dropped the gloves with Devils defenseman Harry Young at 17:40 in a hard fought, back-and-forth 55 second battle . The fight was Pelech's 15th of the season.

Just 27 seconds into the second period, Mills scored his second goal power play goal of the game to give the Devils a 5-1 lead. With Sharks forward Ryan Del Monte in the penalty box for slashing, the Devils rushed into the Sharks zone 3-on-3 and Devils forward Joe Whitney sent a pass from on top of the left face-off circle over to Mills, who fired a one-timer on net from the top of the right slot that beat Sateri for the goal.

O'Hanley stopped the bleeding for the Sharks by scoring his third goal of the season at 3:36 off a slap shot from on top of the left face-off circle on a 4-on-3 rush. Lucia and Sharks defenseman Taylor Doherty were credited with the assists on the goal.

Kennedy cut the Devils lead to 5-3 with a power play goal, his 11th goal of the season, at 14:35. With Harrold in the penalty box for holding the stick, the Sharks went on a 4-on-3 power play advantage. Holding the puck inside the Devils zone, Kennedy corralled the puck near the right corner, skated in on Kinkaid, deked and fired the puck top shelf for the goal. McCarthy and Irwin were credited with the assists.

Combs pulled the Sharks to within a goal with his 15th goal of the season at 19:12. After winning a battle for the loose puck in the right corner of the Devils zone, Del Monte skated behind Kinkaid's net and centered the puck in front for Combs, who zapped the puck past the blocker of Kinkaid for the goal.

At the start of the third period, the Devils pulled Kinkaid for Jeff Frazee as Kinkaid suffered an injury on his hand. The change in net didn't matter to the Sharks as McCarthy tied the game at 5:01 with a power play goal, his team leading 17th goal of the season.

With Sestito in the penalty box for slashing {and a 10 minute misconduct for abuse of officials}, the Sharks went on another 4-on-3 power play advantage where McCarthy fired a shot on net from just inside the right face-off that beat Frazee through the pads for the goal. Kennedy and Nathan Moon were credited with the assists on the goal.

Zharkov put the Devils up 6-5 with his 14th goal of the season at 14:24 off one-timer from the right face-off circle dot that beat Sateri after the Sharks failed to clear the zone.

Having already used his time out, Sharks head coach Roy Sommer pulled Sateri for Thomas Heemskerk with 1:33 left in the third period in order to give his top line a breather. Heemskerk stayed out on the ice for 10 seconds in his AHL debut before being pulled for the extra attacker. However, the Sharks weren't able to generate any shots on Frazee with the extra attacker.

For the game, the Sharks were outshot 46-28, were 2-for-3 with the man advantage and 2-for-5 on the penalty kill... Sebastian Stalberg {scr}, Jimmy Bonneau {scr}, Brodie Reid {scr}, Cam MacIntyre {inj}, Andrew Murray {inj}, Mike Moore {susp} and Tyson Sexsmith {scr} did not dress for the Sharks... With the three fights, the Sharks now have an AHL leading 111... Kennedy {2-5-7} and McCarthy {2-3-5} extended their point streaks to four games... Sexsmith was with his wife in California, who was expecting their second child. 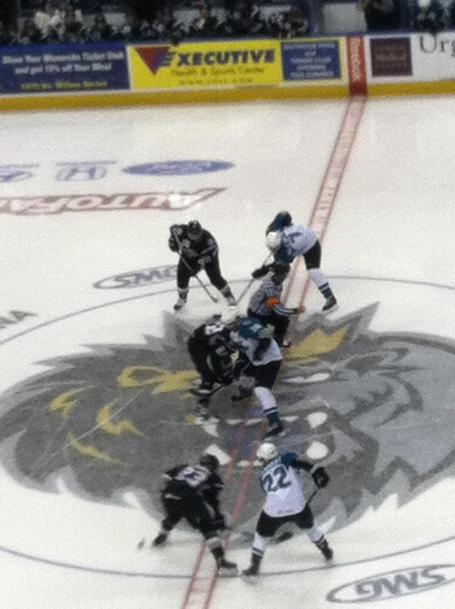 On Sunday afternoon {March 25}, the Sharks traveled to the Verizon Wireless Arena in Manchester, NH, to play the hosting Manchester Monarchs in their 10th meeting of the season and were defeated 5-1 despite the game being the Monarchs' third game in as many days.

McCarthy had the lone goal for the Sharks to extend his point streak to four games {3-3-6} while Sateri stopped 25-of-30 shots.

Monarchs forward Justin Azevedo gave the Monarchs a 1-0 lead with his 23rd goal of the season at 17:22 of the first period. With the puck inside the Sharks zone, Azevedo fired a shot on net from on top of the face-off circles that Sateri stopped. However, the Sharks weren't able to clear the zone as Monarchs forward Stefan Legein intercepted the puck inside the left face-off circle. Legein quickly sent a cross ice pass to Azevedo, who was all alone at the right side of the goal crease, and Azevedo put the puck into the open net for the goal.

The Monarchs extended their lead to 2-0 with Brandon Kozun's 19th goal of the season at 9:23 of the second period. Off a face-off inside the Sharks zone, the Monarchs fired a bouncing puck on net that Sateri stopped. However, the Sharks failed to clear the rebound and Kozun swept the puck into the open net for the goal.

McCarthy cut the Monarchs lead in half with his team leading 18th goal of the season at 10:57. Entering the Monarchs zone on the right side, McCarthy got around Monarchs defenseman Jake Muzzin and snapped a shot from the right face-off circle dot that beat Monarchs goalie Jeff Zatkoff on the blocker side for the goal. Pelech and Ben Guite were credited with the assists on the goal.

The Monarchs regained their two goal lead as David Meckler scored a power play goal, his ninth goal of the season, at 13:56. With a 4-on-3 power play advantage and the puck inside the Sharks zone, Azevedo fired a shot on net from the top of the center point that Meckler, who was positioned right on top of the crease in front of Sateri, got a piece of to deflect past Sateri for the goal.

Azevedo extended the Monarchs lead to 4-1 with his second goal of the game, this time a short-handed breakaway score that Sateri had no chance on. The goal was the fifth short-handed goal surrendered by the Sharks to the Monarchs this season.

Legein sealed the Monarchs win with a power play goal, his 13th goal of the season, at 7:52. With Petrecki in the penalty box for tripping, the Sharks failed to clear the puck out of their zone as Irwin had the puck stolen from him in the left slot by Azevedo, who skated out to the right slot and passed the puck back to Legein, who fired a one-timer from the left slot that beat Sateri on the blocker side for the goal.

For the game, the Sharks were outshot 30-28, were 0-for-2 with the man advantage and 3-for-5 on the penalty kill... McLaren {inj}, Moore {susp}, Curt Gogol {scr}, Del Monte {inj}, MacIntyre {inj}, Viedensky {scr} and Sexsmith {scr} did not dress for the Sharks... Heemskerk made a brief 95 second appearance in net midway through the second period and has yet to face an AHL shot... Andrew Murray returned to the Sharks line-up after missing the last 12 games due to injury... Pelech's fight with Monarchs forward Richard Clune at 18:13 of the third period was his 16th fight of the season and gave the Sharks an AHL leading 112 for the season... The Sharks are 17th in the AHL on the power play at 16.9%, 14th on the penalty kill at 82.4% and first in penalty minutes with 21.4 per game. 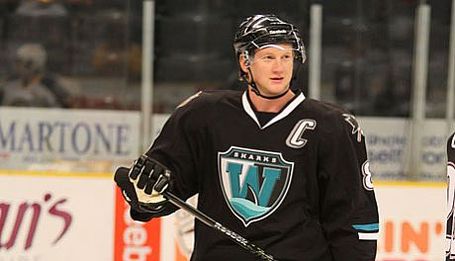 On March 20, 2012, the AHL website announced that the league had suspended both Moore and Bridgeport Sound Tigers forward Micheal Haley three games each due to their actions in a March 18 game between the two teams. The two engaged in a pair of fights in the first period of that game and both were assessed game misconducts for leaving the penalty box for the second fight.

Here are the two fights in question, courtesy of Youtube user "islesenforcers."