After several weeks of being involved almost exclusively in low-event affairs, the Sharks' win over the Avalanche last night was a legitimate barn-burner. The teams combined for 43 scoring chances with San Jose earning an impressive 26 of those, including a 22-15 besting of Colorado at even strength. The game was probably closer than the chance count and final score would suggest, however, as the Avs had actually outchanced the Sharks 13-12 with about three minutes remaining in the second period before the Sharks generated a flurry of opportunities to close out the frame, rattling off eight consecutive scoring chances in a span of about 160 seconds with the Logan Couture line inflicting much of the damage. 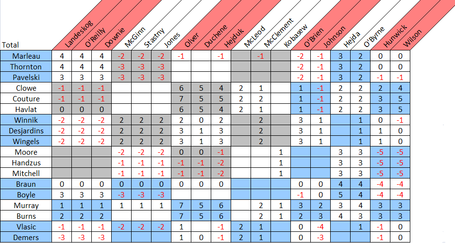 It took a couple of shifts, but McLellan and the coaching staff came to the realization that the line they should be focused on shutting down wasn't so much Paul Stastny's line as Ryan O'Reilly's, featuring the incredible Gabriel Landeskog. As it turned out, the Sharks' top line ended up skating against Stastny and O'Reilly for about an equal amount of time but they were clearly the only Sharks line that were able to win their matchup against the latter, although they took it in the teeth from Stastny and Jamie McGinn. The coaching staff also helped orchestrate the Sharks' most dominant shift of the game - it didn't result in a goal but with Matt Duchene and Milan Hejduk inexplicably out for a key defensive-zone draw near the end of the second period, McLellan pounced with the Couture line who generated five scoring chances in less than a minute against Duchene's line for Colorado.