Nothing has gone right for the Sharks against Anaheim this season so it's fitting that the season series ended with perhaps the longest video review of an empty netter in NHL history that concluded with Corey Perry being awarded a goal for shooting a puck off the side of the net, clinching a 3-1 victory for the Ducks and a 5-1 record for Anaheim versus San Jose in the season series.

While that record isn't entirely indicative of how this season series has really been played, it probably does justice to how the last two meetings between these teams have gone. The Ducks were dominant throughout their 5-3 shellacking of the Sharks last week and while tonight's contest was much closer, Anaheim still had the better of the play, outchancing San Jose 14-12 at even strength despite leading for most of the third period (chance summary after the jump).

The Sharks had their chances early in this one with Joe Pavelski ringing a point-blank shot off the crossbar about seven minutes in. A few shifts later, Pavelski and Boyle were both set up perfectly by Joe Thornton on the only power play either team enjoyed all night but neither opportunity resulted in a goal. Following that failed attempt with the man advantage, the Sharks spent much of the remainder of the first chasing, allowing the Ducks to move through the neutral zone with ease and generate chances, with the line of Bobby Ryan, Nick Bonino and Devante Smith-Pelly causing much of the damage.

The Ryan line got on the board first for the Ducks as the skilled winger beat Dan Boyle to the front of the net to tap a cross-crease pass from Smith-Pelly past Antti Niemi. The Sharks responded less than a minute later when Jonas Hiller and Francois Beauchemin got their wires crossed behind the Anaheim net, allowing a forechecking Logan Couture to strip the puck away and set up a wide-open Ryane Clowe in front of a gaping Ducks net. The score remained tied until Teemu Selanne, perhaps playing his final game against his former team, deflected a Luca Sbisa point shot into the goal five minutes into the third period, giving Anaheim a lead they wouldn't relinquish.

And so continues the roller coaster that is the 2011-12 San Jose Sharks season. With the Dallas Stars and Los Angeles Kings picking up wins tonight, the Sharks drop from the division lead to 8th in the conference with a huge game against the Phoenix Coyotes looming in less than 24 hours. If San Jose ends up missing the playoffs, their 1-5 record against the division doormat Ducks will be a significant reason why. And while bad luck certainly played a part in determining some of those outcomes, their final two contests against their Southern California rivals were flat-out missed opportunities where the Sharks really didn't have anyone but themselves to blame. 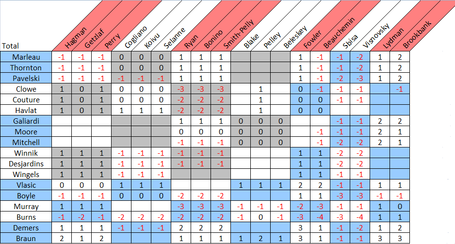 Couture's line really took a pounding from Ryan/Bonino/DSP at even strength although some of the blame for that can arguably be directed at the coaching staff for having Couture, Martin Havlat and Ryane Clowe start five of their EV shifts in the defensive zone. With two dependable defensive lines centered by Andrew Desjardins and Dominic Moore, there's little need for the Couture line to start any more than 30% of their shifts in the defensive zone tops. While we all know about Logan's two-way chops, Havlat and Clowe are pretty much liabilities in their own end, with the latter seemingly good for at least one egregious d-zone turnover a game while trying to advance the puck on the breakout. On defense, Justin Braun had another phenomenal game while an overtaxed Brent Burns who played over 27 minutes with Douglas Murray injured partway through, really struggled.