It's no secret that the Sharks lost this game due to their listless play in the third period. We've discussed "score effects" a lot this year when attempting to contextualize scoring chance numbers - essentially, NHL teams that carry a lead into the final twenty minutes of a hockey game tend to get outchanced in the third as they have little incentive to mount offensive pressure. It was the complete opposite in this game - the Coyotes dominated the Sharks in the third period, outchancing them 9-5 despite holding leads of one and two goals for the entire frame. San Jose did end up winning the chance battle overall, 19-16, thanks in large part to a 9-2 trouncing in the first period but the tune was a familiar one as the team failed to finish any of their numerous opportunities. 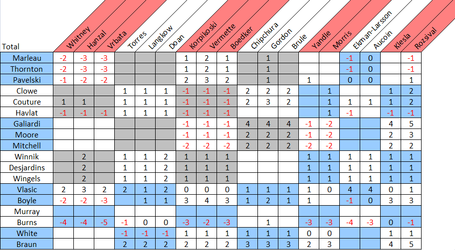 Poor game by the entire top line who were pretty much eaten alive by their Phoenix counterpart at even strength, as was Brent Burns. As you can see, much of the Sharks' advantage in chances was built on kicking the crap out of Phoenix's fourth line. Speaking of fourth lines, it's hard to fault the effort of the Sharks' bottom three forwards in this one; they won every single one of their matchups by the chances as Wingels alone generated three terrific opportunities to get the Sharks on the board.