A miniature four-game imitation playoff series, featuring two games each against the Dallas Stars and Los Angeles Kings, will determine whether or not the Sharks are allowed to stick around when the real deal gets going April 11th. So far, so good.

Joe Pavelski scored twice and Antti Niemi made 22 saves, including 8 in the third period when score effects took hold, to improve the Sharks to 4-0-1 against Dallas this season with a crucial final game of the regular season series to be played on Tuesday night in Texas that could help solidify a playoff spot for San Jose. The win gives the Sharks 90 points on the season, moving them back into eighth spot in the West and a point behind division leader Los Angeles.

Pavelski initiated what was a dominant first period for the Sharks with a goal 58 seconds into the game. Scapegoat of the week Patrick Marleau decisively won a puck battle against Stars defenseman Stephane Robidas in the corner and worked it free to Joe Thornton who set up Pavelski for a one-timer in the slot that found twine. Justin Braun ensured the 1-0 lead would stand halfway through the period by denying a sure goal by Michael Ryder, deflecting the puck out of play with his stick as Dallas' leading goal-scorer stared at an empty net.

After generating several chances on three separate power plays, the Sharks finally cashed in on the man-advantage as Martin Havlat drifted a filthy saucer pass across the ice to an activated Jason Demers for another one-timer goal. The teams traded chances for much of the second period until Pavelski, gaining the blue line via his patented shoot-and-follow offensive zone entry headed straight for the front of the net to deflect a Marc-Edouard Vlasic point shot past Kari Lehtonen.

It seems like I talk about Pavelski every time I write one of these but it's for good reason: he's flat-out been the Sharks' best player all season long and seeing him rewarded for his impeccable two-way play with the first 30-goal season of his career is satisfying. And, as always, it wasn't just about the two goals with Pavelski: despite playing 6 of his 10 even-strength minutes against Loui Eriksson's line and starting 70% of his EV shifts in the defensive zone, Pavs finished +4 in scoring chances (on the ice for just one chance against - summary after the jump) and +5 in Corsi. He's pretty good at hockey.

The Sharks have teased us quite a bit over the past few weeks with flashes of brilliance followed by sub-par outings but one thing is clear: if the team can manage to put together three more efforts like this one, they'll be well on their way to the Stanley Cup Playoffs. 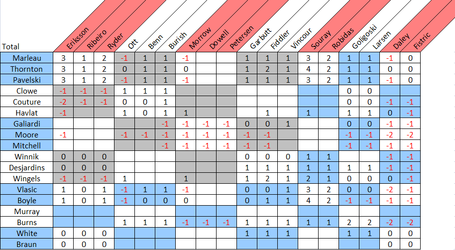 As I mentioned earlier, the Thornton line spent most of their ice time at evens battling Eriksson and Mike Ribeiro and came out on top. The Moore line had a really rough night as they ended the game without generating a single scoring chance largely due to the fact that they spent so much time in their own zone despite not really starting there all that often. Good bounce-back effort by Burns after what was a really rough road trip for him.