The Blues excel at limiting scoring opportunities at both ends of the ice and that was on full display last night, along with more evidence that St. Louis is very much the real deal as one of the best teams in the league this season. The Sharks went 35 minutes in this game without recording a scoring chance, a span that enveloped the entire second period. They ended the night with 5 chances - just 4 at even strength, one of which came with Antti Niemi pulled for an extra attacker. The Blues only generated 7 EV chances themselves (and an additional 6 on the power play) but that wasn't for a lack of effort as they spent the vast majority of the game in the Sharks' zone despite holding the lead for nearly 57 minutes. It was really just a flawless game from a team that's flat out better than the Sharks by any metric. Another one to erase from the memory bank if you're San Jose and hope like hell you don't have to face these guys in the playoffs. 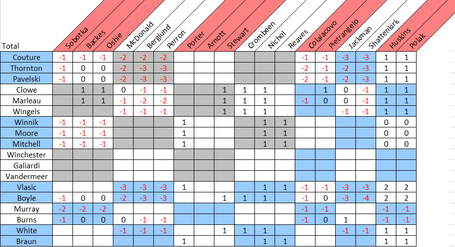 With such a small volume of chances in this one, I don't know if there's much that can be gleaned from this chart. The obvious observation is that the top line didn't fare very well against the Berglund line for St. Louis, who they were matched up against for about half their shifts.