The Sharks really came on in the third, outchancing the Oilers 7-4, including a well-executed transition play near the end of the game in which Joe Pavelski brilliantly turned a 3-on-2 into a 2-on-1 featuring Joe Thornton and Patrick Marleau for a chance that in all likelihood should have ended the game. But, alas, the bounces were the enemy of the Sharks once again although they were outchanced and outplayed in a relatively low-event second period. It wasn't entirely reflected in the scoring chances (although he did finish +1) but Tommy Wingels was a fireball in this game, laying out the likes of Ben Eager and Theo Peckham on the forecheck, consistently winning puck battles and registering a +11 Corsi rating as a result. Wingels has really cemented his spot in the team's top six and, at least in my view, has earned the right to remain in the lineup even after Martin Havlat's return. 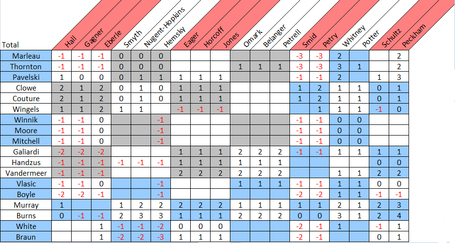 Although they finished with the lowest scoring chance plus-minus ratings up front, the Dominic Moore line still held their own hard-matched against Edmonton's kid line, with Moore spending about 11 of his 14 EV minutes playing against Taylor Hall. With the Moore unit facing Sam Gagner and Joe Thornton's line taking on Smyth/RNH/Hemsky, Couture's line was able to spend a chunk of their ice time against Shaun Horcoff and two plugs along with the Oilers' third defense pairing. They generated the results you'd expect in terms of possession and chances along with the goal.

It'll be interesting to see going forward whether McLellan continues to deploy Thornton against the toughs (as he's done all year) and Moore against the second-toughs (although it's difficult to distinguish between the two with the Oilers lineup - there's little difference in skill between the top two lines Edmonton iced last night in my opinion), allowing Couture to feast on softer minutes.