Torrey Mitchell doesn't always score but when he does it's in as dramatic a fashion as possible. Almost a year to the day after his Lemieuxesque tally in a game against Vancouver, Mitchell completely undressed Dallas defenseman Alex Goligoski en route to a highlight-reel marker with two seconds remaining in the second period to tie the contest and set up perhaps the most entertaining twenty-five minutes of regular season Sharks hockey since that game against the Canucks a season ago. Unfortunately, just like that night, San Jose went on to lose in a shootout as the Stars widened the gap between themselves and the Sharks by another standings point.

We might be beating a dead horse here but the Sharks just can't buy a bounce right now. They outplayed Dallas in this one, outshooting them 48-35, outchancing them 23-18 (full chance summary after the jump) and earning 54.3% of the Corsi events but the hockey gods once again weren't on their side. Dan Boyle was blatantly tripped in the slot by Ryan Garbutt on Jamie Benn's third period goal but obviously there was no call. Video replay was necessary to verify Tomas Vincour's game-tying goal with a little over a minute to play in regulation and of course it was confirmed that the puck trickled every-so-slightly over the goal line. Patrick Marleau hit a streaking Joe Pavelski with a breakaway pass in the second period but, to no one's surprise, the puck bounced off Pavelski's stick at the blueline right before Pavelski himself fell to the ice. It's safe to say this isn't something that will continue - the Sharks' luck will turn eventually and the best they can do in the interim is continue to outplay the opposition.

After a first period highlighted by a power play for the Sharks on which they generated a metric asston of shots, including two grade-A chances by Marleau, Michael Ryder opened the scoring for Dallas in the second period. After Kari Lehtonen stopped Ryane Clowe on a great opportunity set up on the rush by Logan Couture, Ryder was able to catch Marc-Edouard Vlasic flat-footed on the counterattack, splitting the Sharks defense and scoring on a slightly over-committed Antti Niemi. Mitchell channeled his inner Lemieux to tie the game, with a primary assist to coulombs, at the end of the second.

Just 27 seconds in game time (but around 17 minutes in real time) later, Marleau gave the Sharks their first lead of the night, scoring off a well-executed cycle down low by the Sharks' top line. Benn put Dallas back on even footing six minutes later with the aforementioned and bizarrely broken play. The score remained tied until, with three minutes left in regulation, Pavelski converted a Dan Boyle rebound at the lip of the crease to give the Sharks a lead that they just couldn't hold onto. With Lehtonen pulled for an extra attacker, Douglas Murray lost a puck battle to Vincour behind the Sharks net, who was able to move the puck to Benn and park himself in front of Niemi. Benn set up Stephane Robidas for a point shot that Vincour batted home on the rebound. Vincour, a very underrated young forward who's compiled some of the best possession numbers among Stars forwards the last two years running, finished the game with its lone shootout tally. 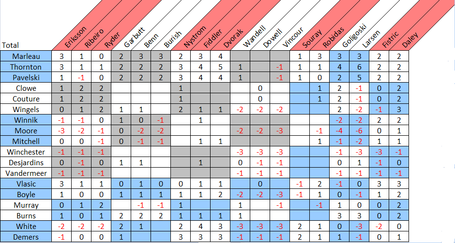 As I talked about in the pre-game, Gulutzan was aggressive in matching the Fiddler line against the Sharks' top unit and Thornton et al annihilated that matchup. Thornton and Pavelski each finished +6 in chances along with +14 and +13, respectively, in Corsi. On the flipside, the Sharks' own third line - Dominic Moore in particular - had a rough ride against the Stars' best offensive trio. Dan Boyle had one of the most high-event games in recent memory - the two teams combined for 33 EV scoring chances in this game and Boyle was on the ice for a staggering 22 of them, 11 for each side.