2012 NHL Playoffs: A Preview of The Sharks Forward Lines & Their Roles Against the St. Louis Blues

Share All sharing options for: 2012 NHL Playoffs: A Preview of The Sharks Forward Lines & Their Roles Against the St. Louis Blues

The San Jose Sharks enter the postseason a forward group that should be considered one of the deepest units in the NHL.

The additions of Daniel Winnik, Dominic Moore, and TJ Galiardi at the deadline, coupled with the return of Martin Havlat from injury, have added to an already stellar top six filled with the likes of Joe Thornton, Patrick Marleau, Joe Pavelski, Logan Couture, and Ryane Clowe.

All four lines will have a role this postseason. The first and second line will be leaned on to do the heavy bulk of the scoring and do so against opposing team's top competition. The third line will be tasked with breaking the Blues stingy neutral zone play with their collective speed and provide energy to the lineup. And the fourth line, along with their defensive responsibility, will be asked to provide strong puck possession down low and work the puck up to the defenseman off that cycle, cashing in on any rebounds that will emanate therefrom.

Sharks Head Coach Todd McLellan isn't afraid to switch it up with his lines if things aren't working, but as of right now this is how things look to be shaping up heading into game one. 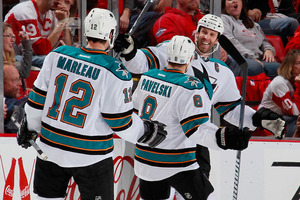 The Skinny: Whenever a line features your best offensive players and your best defensive players you know it's going to be an absolute treat to watch. At even strength this trio is 1-2-3 in quality of competition and 1-2-5 in CORSI relative to their teammates. All of those gaudy possession numbers come along with 79 goals, 123 assists, and a combined +45.

To put it simply: They play the best, and consistently pummel the best, each and every night they hit the ice.

A big part of their success comes with their ability to create off the low cycle, an area of the game where all three players thrive. There's been too many times to count this year where Pavelski, Thornton, and Marleau put on an absolute show behind the net, with one player dropping the puck into a vacated area of the ice before a linemate makes a precise read and picks it up a stride and a half ahead of the defensive player. Puck goes to Jumbo, he slides a pass through a pinhole, and that red light thing happens.

With all the talk about the Blues excellent possession metrics (and they undoubtedly are excellent), the fact remains that St. Louis doesn't have the thoroughbreds San Jose has at the top of the lineup. Sure they have a deep stable of reliable horses, but none that are able to consistently do what Pavelski, Thornton, and Marleau have done in regards to goal production this season.

If the Sharks are going to advance they're going to need some big games from this trio. And as all three have shown in previous runs to the Western Conference Finals, they are more than able to produce points when it counts. 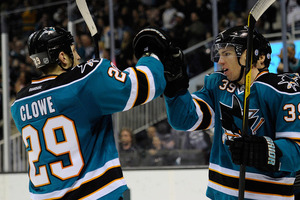 Scoring Threat Level: Matt Taylor on prom night (he was the man in high school despite being a part of the Backstreet Boys official fan club)

The Skinny: Although San Jose's top line is undoubtedly their most effective line by every conceivable metric, the second line might be their most exciting to watch. Silky smooth Martin Havlat is no Datsyuk-esque magician (who is besides the man himself?), but he's about as close as it gets. A head bob here, a little shimmy shoulder shake whoopty whoop whoop what! there, and open ice lies ahead for him to work with. Ryane Clowe complements Havlat's style with excellent puck possession along the boards as well as an ability to provide some physical play in the corners, opening up the ice for his linemates to perform.

And then there's Logan Couture, a player who at the age of 23 years old has turned into a budding star in this League. He drives possession, skates very well for a player without blazing end to end speed, and much like Joe Pavelski always seems to find himself around the puck. Plus there's that wrist shot, which consistently is able to find top corner like it ain't no thang. Couture is a player who was physically targeted by the Los Angeles Kings in the final two games of the regular season for a specific reason-- he's a gamechanger, a crucial part of that second line, and a player who is able to beat teams at big moments.

Key This Series: Make the Blues struggle deciding who to send their best defensive unit out against.

It stands to assume that Couture, Havlat, and Co. will face the second toughest matchup against the Blues and avoid David Backes (much more on that from The Neutral tomorrow), and if Ken Hitchock is a master at anything it is locating his matchups. The last change at home is going to get him as much opportunity as possible to throw out his best defensive unit against Thornton, setting the stage for the second line to perform.

Another aspect of the Blues game is physicality, and much like Los Angeles, they'll probably target Logan Couture with hard checks. It's going to be important for Clowe to pick his spots defending him here, because as mediocre as St. Louis' power play is, the 29th ranked Sharks penalty kill had it's difficulty containing them during the season series. 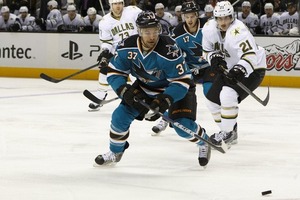 Scoring Threat Level: Jason Plank on prom night (a lot of speed if you know what I'm unfortunately saying)

The Skinny: This line has speed to burn, and while they aren't the de-facto third line (McLellan has given his bottom two lines pretty equal ice time in the last few games), they're going to be an important piece of the puzzle against the Blues. The addition of Dominic Moore at the trade deadline gave the Sharks an excellent man in the dot with a nice set of wheels to complement Mitchell and fellow trade deadline acquisition TJ Galiardi, providing the Sharks with the needed speed to get through the neutral zone.

With Galiardi's agitation abilities, Moore's defensive reliability, and Mitchell's speed, this third line has something in spades that the rest of San Jose's lines do not. Which brings us to...

Key This Series: Break St. Louis in the neutral zone.

The Blues are a phenomenal team at defending entries into the zone and forcing teams to chip the puck in-- it's what has made them so successful over the course of the season, and a big factor as to why they had so much success against San Jose during the regular season. What the Sharks didn't have for 3 out of those 4 matchups was a line that can penetrate the zone quickly and build some momentum leading into the next shift.

The primary purpose of this line, besides keeping the Blues off the scoresheet and hopefully chipping in some big goals of their own, is going to be to provide that energy function which can build and build. I'm no Patton-esque tactician, but a fast entry, strong forecheck, followed up with a quick change that leads to the top line coming out on the ice to catch the Blues on a long shift is something to look for out of this line. They have the speed to beat the Blues lockdown defense, and utilize that speed they will. 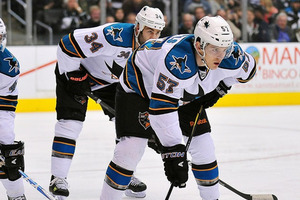 Scoring Threat Level: Your buddy Ralph who doesn't score much but works hard to do so

The Skinny: Daniel Winnik is one of the best players on the Sharks at controlling the puck along the boards, falling only behind Joe Thornton and Ryane Clowe in this area of the game. That strong puck possession skill allows him to work the puck from below the net all the way to the point, where San Jose's defenseman like Dan Boyle, Brent Burns, and Justin Braun can fire away on the net.

Desjardins and Wingels are no slouches in this area as well-- they can cycle just as well as any fourth line in the League, and that's an important thing in a series against a Blues team that is keen to dominate opposing teams in this aspect of the game.

This line is also very defensively responsible-- both Wingels, Winnik, and Desjardins take pride in this aspect of their game, and can be counted on to keep whichever bottom six Blues line they face in check.

Key This Series: Work the puck to the defensemen off the cycle, cash in on rebounds.

Where I think this line can really flourish is by controlling the puck down low and setting up the Sharks defenseman to put pucks on net. They're not going to score many pretty goals, but they do have the size and strength to bang home some rebounds following a strong possession game.

This all starts with their ability to find their blueline partners at the point and fight their way to the net for rebounds-- if they can stick to that gameplan I think they could end up being a big factor in this series.