2012 NHL Playoffs: What Head-to-Head Matchups Can We Expect Between the Sharks and Blues?

Share All sharing options for: 2012 NHL Playoffs: What Head-to-Head Matchups Can We Expect Between the Sharks and Blues?

Conventional wisdom says that everything gets ratcheted up in the playoffs, from facial hair to whining about officiating to Doc Emrick's voice and all in between. One thing that empirically increases at this time of year is the degree to which coaching staffs stringently focus on line matching. With earning a victory all that matters, coaches are less likely to experiment with line combinations and matchups, instead opting to identify which head-to-head duels give them the best chance at winning, whether that means entrusting a line to outscore its counterpart or taking a hit on a matchup of checking forwards against superstars in the hopes that their own top line will be able to compensate for the losses when deployed against easier opposition.

The venerable Eric T. of Broad Street Hockey looked at the regular season series between the Penguins and Flyers to examine which Flyers were most frequently deployed against which Penguins, and the events that resulted, in anticipation of the Battle of Pennsylvania that kicks off tonight. In this post, we'll do something similar based on the four meetings San Jose and St. Louis had in the regular season. We're obviously dealing with an extremely small sample size here so definitely approach with caution before accepting any of this information as gospel but hopefully digging into the data gives us a better idea of who Todd McLellan is likely to deploy against which Blues forward units and the results we might expect for each matchup.

Rather than merely focus on the four-game regular season series, it's probably also useful to take a look at how Ken Hitchcock and Todd McLellan deployed their troops all year long. Thanks to the benevolent SnarkSD's bubble charts, we can do this. On the x-axis of each chart is offensive zone start%, or the percentage of a player's even-strength shifts (excluding ones that start in the neutral zone) that began in the offensive zone. On the y-axis is Corsi Rel QoC, which is the best available approximation of the quality of opposition a player faced at even-strength. Each bubble represents the player it's named after with the size of the bubble representing the absolute value of that player's Corsi rating. Blue for St. Louis and teal for the Sharks indicate a positive Corsi rating while black for St. Louis (although you won't need to worry about that) and orange for San Jose indicate a negative Corsi rating. We'll start with the Blues (click to embiggen):

You aren't colorblind; not a single regular defenseman or forward for St. Louis finished the season with a negative Corsi rating. They're a pretty good team. Up front, David Backes and T.J. Oshie have been more or less attached at the hip as Hitchcock's go-to tough-minutes forwards and they've both killed it in as difficult a defensive role as anyone on the Blues plays; receiving both the most difficult zonestart ratio and the the toughest competition among St. Louis forwards. With combinations involving Vladmir Sobotka, Patrik Berglund and Alex Steen drawing second-tier competition, the St. Louis coaching staff has been able to adequately shelter their more one-dimensional offensive talents like Chris Stewart, Jamie Langenbrunner, Jason Arnott and Matt D'Agostini. There's just a ton of forward depth on this team and Hitchcock and co. have done a terrific job of identifying roles for each of them that they've all been able to adeptly fill.

It's much the same on the back end with the outstanding Alex Pietrangelo and partner Carlo Colaiacovo being used most frequently against opposing top lines. The pairing has started in the offensive zone slightly more frequently than their own end, indicative of the fact that they're more two-way defensemen than strictly shutdown types. Although Colaiacovo was probably more notorious for being perennially injured than anything else coming into the year, he's fit in really nicely on that pair. Barret Jackman and Kevin Shattenkirk usually play together on St. Louis' second pairing against the next tier of competition, with Jackman receiving far more defensive zone starts - usually alongside Roman Polak - than the offensive specialist Shattenkirk. Moving on to San Jose:

As we know, Joe Thornton and Joe Pavelski did most of the heavy lifting defensively among the team's forward group, with Patrick Marleau joining them more often than not albeit in more favorable starting positions. The two Joes' effectiveness starting in their own end against top competition allowed McLellan to deploy Logan Couture, Ryane Clowe and Martin Havlat in easier situations. As we've mentioned several times, Michal Handzus had an awful year playing against nobodies - although, in his defense, he did have a tougher zone start ratio than every other full-year Shark.

On defense, Marc-Edouard Vlasic was McLellan's go-to shutdown option, paired with Dan Boyle the vast majority of the time. Douglas Murray had a poor season at shot suppression, even when accounting for his defensive zone starts, and the Sharks will need him to be better if he's going to play second-pair minutes against the Blues' top six. It's also worth nothing that after being in the red by this measure nearly all season, a second-half turnaround (largely fueled by playing a lot of minutes with standout Justin Braun) pulled Jason Demers above water.

So now that we've taken a look at how these teams have managed their benches all season, we can see how well those tendencies held up in the four-game regular season series. This was originally going to be in two pretty matrices but I had some issues pulling the data so we'll have to settle for links to timeonice shift charts:

Interestingly enough, Hitchcock employed somewhat different matchup strategies between the two games. Where he was more or less content to have David Backes and Patrik Berglund split duty against the Thornton line in the teams' first meeting in St. Louis of the season, he utilized a bit more of a hard-match of Backes against Thornton the second time around with Backes on the ice for around 60% of Jumbo's EV shifts. Based on how he's used Backes all season, I'd probably bet on that second iteration being closer to what we see in the playoffs, if not an underestimate of how frequently Hitchcock will chase that matchup. As expected, Pietrangelo and Colaiacovo logged a ton of minutes against the Sharks' top line and, like Backes, were even more closely matched up against them for the second game in St. Louis.

What went on in the two games in San Jose was more or less an inverse of Hitchcock's two in St. Louis. McLellan opted to hard-match the Sharks' top line against Backes for Game 1 in San Jose but used them much more frequently against the Berglund line and even the Blues' third and fourth lines, in Game 2 - presumably to generate offense as the Sharks trailed for the entire third period of that game. Dominic Moore actually ended up playing quite a bit against Backes and both he and Daniel Winnik, presumably playing on separate lines, will have the chance to make a huge impact in this series. Assuming the top two lines for each club are able to saw off possession and chances with each other, the onus is on the bottom six to outplay their counterparts on St. Louis, which is no easy task as we discussed above. The most interesting thing to take from this, in my opinion, is that both coaches seem reasonably happy with the Backes-on-Thornton matchup. Obviously they both can't be right and it'll be intriguing to track which of the two big centers and his linemates ends up justifying his coach's decision over the course of the playoff series.

With such a small sample size, I'm not entirely sure what can be gleaned from these numbers. I chose the players primarily because there was a substantial amount of head-to-head time spent between them over the course of the season series but also because they're somewhat representative of separate lines. There's some definite overlap though, obviously with Marleau and Thornton (although Marleau did center his own line for one of the games in St. Louis) as well as with Perron and Backes. What primarily stands out to me is Couture's struggles against the Patrik Berglund line - if that's indicative a real weakness, it'll present some difficulties as Hitchcock will presumably push for that matchup at home. All three forwards steamrolled Backes' line though which is extremely encouraging.

Douglas Murray didn't crack ten minutes against Perron or Berglund, I just included him to show how much the Sharks were dominated with him on the ice against the Backes line. Luckily, Vlasic and Boyle will presumably see the lion's share of minutes against that line and both performed admirably in that role in the season series although they each struggled to different extents against Berglund, whose two-way game has always been really underrated.

Finally, and just like the head-to-head Corsi ratings, this is mostly just to have fun with small sample sizes and probably shouldn't be taken too seriously from an evaluation standpoint, I compiled the head-to-head scoring chance totals for all four games in the season series: 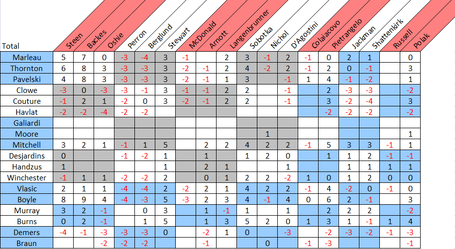