With this being the playoffs and all, I'm guessing we might have a few new readers so here's a refresher on what constitutes a scoring chance and there's some stuff about scoring chance types in here for anyone interested.

Despite being dominated territorially, particularly in the first overtime period (the team as a whole posted a -13 Corsi rating in this game, with Douglas Murray a hilarious -21), the Sharks were reasonably effective at limiting the Blues' quality opportunities. San Jose was still outchanced but it was by a relatively narrow margin, 14-11 at even strength and 19-17 overall. Calling this a huge win seems like an understatement but, realistically, the Sharks shouldn't expect to win three more games in this series if they continue to be outchanced - especially since they probably shouldn't count on a 0.952 SV% from Antti Niemi for much longer. If San Jose can do a better job at penetrating the neutral zone in order to spend more time in the Blues' end of the ice, they'll be on the fast track to an upset here since they've already banked a victory they probably didn't deserve. 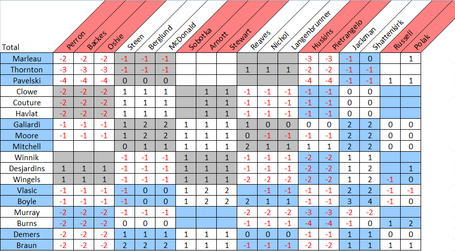 The most important matchup in this series is the Joe Thornton line versus the David Backes line and the early returns are not good at all for the Sharks. Thornton, Patrick Marleau and Joe Pavelski put together one of their weakest performances in recent memory for Game 1 and were clobbered in EV chances by Backes, Perron and Oshie. This is a matchup both coaches expressed interest in maintaining during the regular season but if the Thornton line fares similarly Saturday night, one wonders if McLellan will try to get them out against the Patrik Berglund line instead once the series shifts to San Jose.

Everyone on the Blues had a field day going up against the Murray and Burns pairing who seemed to have a lot of difficulties against the St. Louis forecheck. As awesome as Burns has been in teal, he still has issues with neutral zone turnovers when attempting to move the puck north and those problems are exacerbated against St. Louis' system. If I were McLellan, I'd probably put Demers, who can make those outlet passes fairly consistently, back with Burns and give Murray a more limited role on the third pairing. In his defense, Murray did have a brutal zone start rate, starting 10 of his 12 non-neutral zone EV shifts in his own end. He also turned in a solid night on the PK where he played nearly two minutes and yielded just a single chance against. I only mention those so he doesn't eat me.