The distribution of scoring chances in this series has been interesting as both teams have had their struggles turning possession into chances so far. While the Sharks spent the majority of the first period in the offensive zone, they ended up only tying the Blues in EV chances in that frame and were outchanced overall. Similarly, although St. Louis dominated possession for much of the second period they were only able to earn a 6-5 edge in chances at evens and were outchanced 7-6 by the Sharks when considering special teams. With both teams adept at solid in-zone defending, it's taken transition opportunities for either side to get into the scoring area. In fact, through two games of this series, 48% of all even-strength scoring chances have come off the rush.

It's anyone's guess as to whether or not that trend continues but if it does, that places even more importance on the Sharks being able to advance the puck through the neutral zone. Despite the loss, I thought that was something the Sharks did a better job of compared to Game 1 and the chance totals back that up as San Jose outchanced St. Louis 16-15 and 12-11 at evens (although score effects played a part with the Blues nursing a 2-0 third period lead). 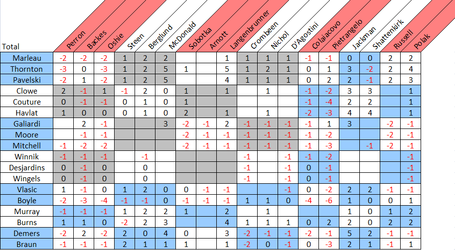 The top line put up much better scoring chance numbers in this one but, interestingly enough, that improvement didn't really come against David Backes. They weren't beaten by St. Louis' top line to quite the degree that they were in Game 1 but they still lost that matchup. The key was being able to take advantage of the Patrik Berglund line as well as their limited minutes against Scott Nichol's unit. I suggested in the Game 1 chance recap that McLellan might look to match Thornton up to Berglund when he has last change and the way the chances went in this one, that might not be such a terrible idea.

Douglas Murray and Brent Burns had a nice rebound effort in this one, in part because the Sharks earned many more offensive-zone draws with their improved territorial play compared to Game 1, giving Murray a significantly easier zone start rate. The flipside of Murray/Burns was the Dominic Moore line who were solid in the Game 1 win, generating many chances late in regulation of that one, but got run over by St. Louis' revamped bottom six here.
More stats from the game: Corsi/Fenwick, Shift Charts, H2H Ice Time, Zonestarts, Play-By-Play, Box Score