Share All sharing options for: The Neutral Zone Battle

As anticipated the series between the Sharks and Blues has been an absolute cage-match for puck possession. Both teams have fought for every inch of ice in St. Louis, and I'm sure that will continue as the series moves out west. As we discussed extensively in the lead up to the series, The front-line of this battle has taken place in the neutral zone. Both teams are well known around the league for a ferocious 1st and 2nd man in on the forecheck. There is no doubt that when it comes to generating chances, the bulk of the work is through both teams' forecheck. This raises the question, who has won the neutral zone battle?

While the definitive answer probably involves tracking zone entries, (as has been tracked for the Flyers at Broad Street) which directly addresses the neutral zone, that's unlikely to happen here. We can, however, use a surrogate in even strength shift by shift CORSI to help uncover some answers. I took the NHL play by play feed from both games 1 and 2, and broke down the CORSI (which is a stat that we can use as a substitute for possession) numbers into shifts and zones. The 2 broad categories of shifts are; 1) those that come directly after a faceoff without any player coming off the ice (labeled 1st Shift), and 2) any shift in which atleast 1 player has changed since the faceoff (labeled On The Fly). I further broke down each shift based on where the last faceoff took place.

A brief disclaimer: This data is cut sushi thin, and is by no means a definitive answer to the question posed above. I think we may start to see trends in the data, but we won't know for sure how everything falls until this series is over. Realistically, it would probably take somewhere around 30-40 games before we could claim statistical significance, ie. half-predictable, half-noise. I should also recognize JaredL, who first published similar data earlier in the year. That's a good reference article for league wide averages. 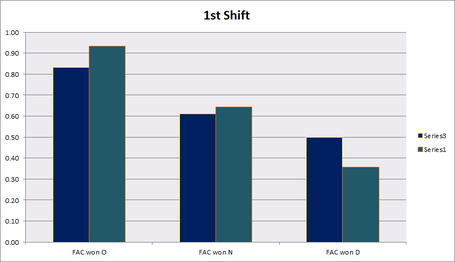 The table above has interesting trends.

The bright spot for the sharks has been their play following an offensive zone faceoff win. The Sharks have generated a lot of shots in the limited time they've spent after an offensive zone faceoff, producing a +50 Corsi/60. The overall Corsi/60 after a neutral zone faceoff is split exactly even with 16 a piece (ie. 0 Corsi/60). The blues have generated a lot of shots as well. As has been noted in both game reviews, there has been a lot of shots from the perimeter, with both teams doing a good job of limiting quality scoring chances from dangerous areas. Despite slightly elevated Corsi/60 totals in their respective zones as compared to league average, the scoring chance count has not been similarly elevated. This certainly confirms the fact that both teams have stayed very responsible in their own end.

Next in the table below we have what I call "On The Fly." This represents a shift in which at least 1 player from either team has changed. "Total All" at the bottom is both "1st Shift" and "On The Fly" combined. There is a lot of noise in the individual data by zone, so I think it's best to look at the Total column. After 46+ minutes of even strength play following a change the Sharks and Blues are pretty evenly matched.

We'll have to re-visit this data as the series continues before we can claim a definitive answer to our question of who has been the better neutral zone team. The data above is pretty consistent with what I've been seeing on the ice. The Sharks have struggled at times moving the puck out of their own end, but overall have done reasonably well. It seems as though the Sharks coaching staff has emphasized quick short passes to escape the Blues forecheck, which has worked well for most of the players. In San Jose McLellan will get the matchups he wants (although it might look similar), and provide more insight into which team has controlled the neutral zone.