Although the final score was determined by special teams, the Blues' complete and utter suffocation of the Sharks at even strength in Game 3 was just as significant a reason the Sharks are now down 2-1 in this series. Despite winning the neutral zone battle for much of the night and establishing a territorial advantage, San Jose wasn't given an inch to operate in the offensive zone with St. Louis keeping them almost exclusively to the perimeter and limiting them to just 6 EV scoring chances all night and just one in the third period (and even that was Logan Couture's goal with Antti Niemi pulled meaning it wasn't really at even strength). Perhaps most indicative of the Blues' defensive-zone dominance was the fact that the Sharks failed to generate a single rebound chance at evens.

Aside from the Sharks potting two goals late to make things interesting, this game was reminiscent of the last time these two teams met on San Jose ice when the Blues limited the Sharks to just 4 even-strength scoring chances and inflicted a ton of damage with their power play. It's difficult to even properly evaluate the penalty kill side of the Game 3 equation using scoring chances because the Sharks allowed goals almost immediately after being penalized on each occasion. The only real positive is that the Blues weren't able to get a lot done outside of their power play either, only outchancing the Sharks 8-6 at evens and 13-11 overall but the biggest reason for that is probably the team getting out to a lead a minute into the second period and, given the effectiveness of their system, not having much of an incentive to subsequently push the pace offensively. 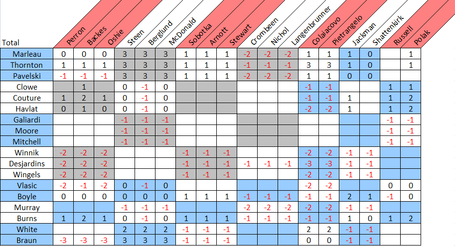 As speculated in this space, Todd McLellan largely targeted the Patrik Berglund line with Joe Thornton's unit rather than stick with the Thornton v. Backes matchup that Ken Hitchcock was successfully able to achieve in St. Louis.
Interestingly, though, rather than pair Daniel Winnik and Dominic Moore to form a checking line against Backes (a role the two played for a few games soon after being acquired at the trade deadline), McLellan showed faith in Logan Couture's ability to match up against the Blues' best center. As you can see in the matrix, it actually worked out phenomenally well - Thornton pounded Berglund at evens and Couture won his matchup against Backes, something the Thornton line struggled to do in Games 1 and 2. Unfortunately, the bottom six gave it all back. Moore and Torrey Mitchell haven't been on the ice for a Sharks scoring chance at even strength since the first OT period of Game 1 while the Desjardins line had a rare terrible outing. They need to be a lot better for the Sharks to have a chance at coming back in this series.

And speaking of needing to be a lot better, Patrick Marleau has yet to record an even-strength scoring chance through three games of this series. He's contributed to the creation of chances and been decent on the penalty kill (although I wasn't a fan of his coverage on the Berglund goal) but the Sharks need their best goal scorer to start generating opportunities from the scoring area or this could be over in a hurry.