Share All sharing options for: Woo Rewind - Sharks end 2011-12 season with a win

Last week, the Worcester Sharks ended their 2011-12 season on a winning note at the DCU Center to finish with an overall record of 31-33-4-8 with 74 points. The Sharks finished in 13th place of the AHL Eastern Conference, missing the AHL Playoffs by nine points, and finished in last place of the Atlantic Division.

After a scoreless first period, IceCaps defenseman Travis Ramsey gave the IceCaps a 1-0 lead with his fourth goal of the season at 6:04 of the second period off a blast from the top of the right point of the Sharks zone that got through traffic {seven skaters} and beat Sateri through the pads for the goal.

Guite tied the game at 11:32 with his fourth goal of the season. Holding the puck at the right point of the IceCaps zone, Sharks defenseman Dylan DeMelo sent the puck to the right corner to Brandon Mashinter, who fed the puck to Guite, who ripped a one-timer on net from the top of the slot that beat IceCaps goalie Edward Pasquale through the pads for the goal. The assist was DeMelo's first of his professional career and his first career professional point.

IceCaps forward Jason King regained the IceCaps lead at 13:41 with his 22nd goal of the season. With the puck sitting on the face-off dot inside the right face-off circle of the Sharks zone, King beat all five Sharks skaters to the puck and quickly fired the puck through the pads of Sateri for the goal.

The Sharks fired 10 shots on net in the third period but couldn't get the puck past Pasquale for the tying goal. IceCaps forward John Albert scored an empty net goal, his ninth goal of the season, at 19:35 to seal the IceCaps 3-1 win.

For the game, the Sharks outshot the IceCaps 29-28, were 0-for-3 with the man advantage and 3-for-3 on the penalty kill... Tyson Sexsmith {inj}, Andrew Murray {inj}, Brodie Reid {inj}, Cam MacIntyre {inj}, Ryan Del Monte {inj}, James Livingston {inj}, Marek Viedensky {inj}, Taylor Doherty {inj} Jimmy Bonneau {susp}, Matt Pelech {susp}, Frazer McLaren {susp}, and Curt Gogol {susp} did not dress for the Sharks... Jay Silvia made his professional debut for the Sharks and wore #24... Bobby Farnham played in his first game as a Shark after playing in three games for the Providence Bruins... Of the 18 Sharks skaters, 11 were rookies... The Sharks finished their regular season series against the IceCaps 3-4-0-1. 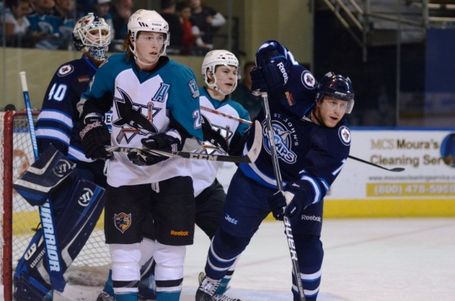 On Saturday night {April 14}, the Sharks traveled to the Glens Falls Civic Center in Glens Falls, NY, to play the hosting Adirondack Phantoms in their final meeting of the season and were defeated 3-2 despite firing 50 shots on net.

Jack Combs and Brian O'Hanley scored for the Sharks while Thomas Heemskerk {0-1-0, 2.14 goals against average, .921 save percentage} made his professional debut and stopped 22-of-25 shots. In addition, Tony Lucia {0-2-2} had a multi-point game for the Sharks.

Sharks captain Mike Moore dropped the gloves with Phantoms forward Derek Mathers in a spirited 20 second scrap at 11:59 of the first period after Mathers put a hard check on Moore. The fight was Moore's seventh of the season.

Phantoms forward Jason Akeson gave the Phantoms a 1-0 lead four minutes later with a power play goal, his 13th goal of the season. On the tail end of DeMelo's hooking penalty, the Sharks failed to clear the zone after a save from Heemskerk. Akeson corralled the puck on the left half wall, skated in untouched on Heemskerk, deked and wrapped the puck around Heemskerk for the goal.

Tye McGinn, the younger brother of Jamie McGinn, extended the Phantoms lead to 2-0 with his 12th goal of the season at 7:57 of the second period. Skating into the Sharks zone 2-on-2, Phantoms forward Tyler Brown sent a slap pass from on top of the left face-off circle to the front of the net for Tye, who deflected the puck past Heemskerk for the goal.

Combs cut the Phantoms lead in half with his 16th goal of the season at 16:43. Off a draw in the left face-off circle of the Phantoms zone, Farnham fired a shot on net from the left point that hit Lucia in front. As a battle in front between Lucia and a Phantoms player ensued, Phantoms goalie Michael Leighton ended up on his back somehow and didn't get up as he was looking for a interference penalty. Sharks defenseman Nick Petrecki corralled the loose puck deep inside the left face-off circle and sent a pass behind the net for Combs, who wrapped the puck into the open net on the right side for the goal. Unhappy with the non call, Leighton threw his blocker into the left corner, earning himself a two minute minor for unsportsmanlike conduct but the Sharks couldn't take advantage of the power play opportunity.

At 7:57 of the third period, Phantoms captain Ben Holmstrom extended the Phantoms lead to 3-1 with his 14th goal of the season off a snap shot from the top of the slot on a 4-on-1 odd man rush.

O'Hanley pulled the Sharks to within a goal with his fourth goal of the season at 9:06 off a one-timer from the left slot that beat Leighton on the glove side for the goal. Lucia and Sebastian Stalberg were credited with the assists.

Just 66 seconds later, Mathers and Sharks defenseman Sena Acolatse were assessed misconducts after Acolatse confronted Mathers, who had cross-checked Acolatse from behind in the numbers during live play.

Despite out shooting the Phantoms 21-9 in the third period, the Sharks couldn't get the puck past Leighton for the tying goal. The Sharks' best chance to tie the game was a blast by Sharks defenseman Matt Tennyson from the right face-off circle dot that rang off the post seconds after Acolatse and Mathers were ejected.

For the game, the Sharks outshot the Phantoms 50-25, were 0-for-5 with the man advantage and 2-for-3 on the penalty kill... Sexsmith {inj}, Murray {inj}, Doherty {inj}, Reid {inj}, MacIntyre {inj}, Del Monte {inj}, Livingston {inj}, Viedensky {inj}, Bonneau {susp}, Pelech {susp}, McLaren {susp} and Gogol {scr} did not dress for the Sharks... With the one fight, the Sharks continue to lead the AHL with 120 fighting majors... The Sharks finished their regular season series against the Phantoms 0-2-0-0. 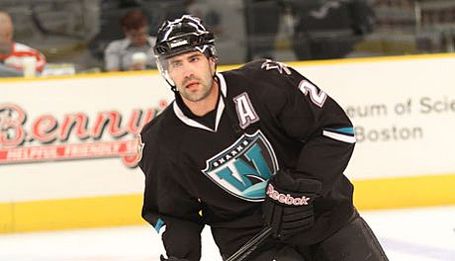 On Sunday afternoon {April 15}, the Sharks hosted the Hershey Bears in their final game of the regular season and skated away with a 3-2 victory. Yanni Gourde, Matt Irwin and Tim Kennedy scored for the Sharks while Sateri stopped 34-of-36 shots. In addition, Gourde {1-2-3} and Irwin {1-1-2} had multi-point games for the Sharks

Gourde tied the game at 8:12 with his first professional goal off a quick rebound snap shot from the top of the slot that beat Bears goalie Scott Greenham, who had traffic in front of him, up high on the glove side. Irwin, whose shot from on top of the left face-off circle created the rebound chance, and Guite were credited the assists.

Just 12 seconds later, Bears forward Andrew Carroll scored his first goal of the season {and first in 68 games} to put the Bears up 2-1. Holding the puck behind Sateri's net, Irwin had the puck stolen from him by bears forward Garrett Mitchell, who fanned on his wrap around attempt on the left side. Carroll reached his stick out and was able to poke the puck past Sateri for the goal.

Irwin tied the game just 49 seconds into the second period with a power play goal, his 11th goal of the season, off a blast of a shot from on top of the left face-off circle that beat Greenham, who was being screened in front by John McCarthy. Gourde and Tennyson, who sent a cross ice pass out to Irwin from the right face-off circle dot, were credited with the assists.

Kennedy put the Sharks up 3-2 with this 13th goal of the season at 13:30. With the puck near the right end wall, Gourde pressured the puck and caused a turnover at the right side of the goal crease. Gourde quickly fired a shot on net that Greenham stopped but Greenham left a rebound that Kennedy, who was crashing the net, was able to get to first and Kennedy fired the puck into the open net for the goal. McCarthy was credited with the secondary assist.

In the third period, the Bears fired nine shots on net but Sateri stood tall and made sure the Sharks ended the 2011-12 season with a win.