St. Louis limited the Sharks to single digits in the even-strength scoring chance department once again but, apart from that, it was an entirely different story in this iteration of the series as the Sharks, unlike in Game 3, were able to translate their considerable territorial advantage into an edge on the chance count, both at evens and overall. San Jose's 15-11 win of the chance battle was the largest margin by which either team has outchanced the other so far in this series but, as has been the case for the better part of the 2012 calendar year, the Sharks were unable to finish their chances (many of which were golden opportunities in this one) while their opponent finished theirs at a better clip.

The simplistic narrative that the feeble-minded have spun since pretty much the invention of hockey is that Joe Thornton chokes in the playoffs. For the third postseason in a row, Jumbo is proving that kind of talk isn't worth the TSN.ca bandwith it occupies as the Sharks captain has done pretty much everything in his capacity to help San Jose win. At even-strength through four games of this series, Thornton has been on the ice for 20 scoring chances for and 11 against, a 64.5% scoring chance percentage that's been accrued while playing some of the toughest minutes of any forward in this series, although he has had some easier zone starts the last two games as the Sharks really took it to St. Louis territorially at the Tank. The Sharks may be on the brink of elimination but Thornton is the last person who should be blamed for that. 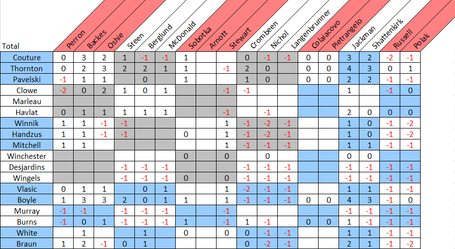 The new-look top line had their ice time pretty much evenly split between facing David Backes and Patrik Berglund, with Thornton spending around 7 minutes against each of St. Louis' top two centers out of his 17 and a half minutes at evens overall. Thornton and Patrick Marleau combined to make Backes more or less a non-factor in this game as Marleau faced Backes whenever Thornton wasn't matched up to him. The problem was that the Sharks' second line was able to get precious little done of their own in the St. Louis end of the ice.

Shuffling the deck chairs in the bottom six didn't appear to have a huge impact but having a third line that held their own in chances going up against what's a pretty soft counterpart in the Jason Arnott line certainly didn't hurt.

How B.J. Crombeen had three scoring chances in this game (three more than Marleau has had at evens through four games combined) is beyond me.