The Sharks' play in the second period was the best single-period performance by either team in this series. San Jose outchanced St. Louis 8-2 in the middle frame (8-1 at evens), winning puck battles and dominating possession for the vast majority of the twenty minutes. Unfortunately, the other forty minutes of Game 5 turned out pretty ugly as the Sharks failed to register a single scoring chance in the first period then watched their third period defensive shell backfire; San Jose yielded five consecutive scoring chances at one point in the third with the final two ending up in the back of their net and clinching the series for the Blues.

I'll have a more comprehensive review of the scoring chances from this series in the coming days but I do think there are reasons to be less than repulsed about what transpired without having to glue on teal-colored glasses. Despite ending after just five games, it was a tightly contested series with the Sharks actually outchancing the Blues 71-68 overall and 49-48 at even-strength. Although score effects certainly need to be taken into consideration since San Jose trailed for nearly the entire series, those are fairly impressive feats given that St. Louis has probably been the best team in the NHL all season and should easily be the favorites to win it all considering the volume of mediocre teams poised to advance. 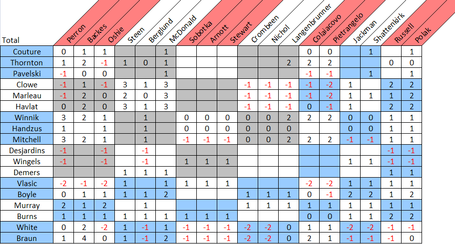 With Ken Hitchcock dictating matchups once again, David Backes was more or less hard-matched against Joe Thornton as the Sharks' captain spent close to 70% of his EV ice time against his counterpart on the Blues. Unlike Games 1 and 2, Thornton was able to win that matchup. Marleau, who probably had his best game of the series despite once again failing to record a single chance at evens, beat the Patrik Berglund line as well and the Sharks as a whole had probably their strongest game at even-strength of this series, making it all the more disappointing that the loss ends their season.