Control of the Neutral Zone: A Review of the San Jose Sharks vs. St. Louis Blues Series

Share All sharing options for: Control of the Neutral Zone: A Review of the San Jose Sharks vs. St. Louis Blues Series

The San Jose Sharks have found themselves cleaning out their lockers in record time. What had plagued San Jose's season was their ultimate undoing, namely their inability to fix the penalty kill. Had the Sharks been stronger on specialty teams, they could very well still be skating. However, other aspects of the series had initially captured a few of us at FTF. At this time we can go back and review the results. Charts and tables to follow the jump.

For most NHL games a significant portion of the game is played at even strength with neither team in clear position to generate a scoring chance. The battle along the boards and in the neutral zone sets up the potential for opportunities at the net. We would be remiss to ignore this facet of the game, despite indirectly accounting for it by tracking precious moments in scoring areas or on special teams. One of the key areas I identified for the Sharks going into the series against the Blues was the neutral zone. Specifically, I was interested in the Sharks ability to break out cleanly from the defensive zone, battle through the red line without turning the puck over, and enter the offensive zone cleanly.

Visually, I think the Sharks got much better as the series went along. The Sharks breakout improved, they utilized the last change effectively, and they played considerably better at home. Although zone entries would probably have been a much better indicator of which team controlled the neutral zone, we can also slice Corsi (a surrogate for possession) thin to try to get an idea.

Picking up where we had left of last week with The Neutral Zone Battle, I compiled the data involving the rest of the games; which included the 2 games played in San Jose, and Game 5 in St. Louis. I'll save the long blocks of table-vomit for another day and post a few key elements here. 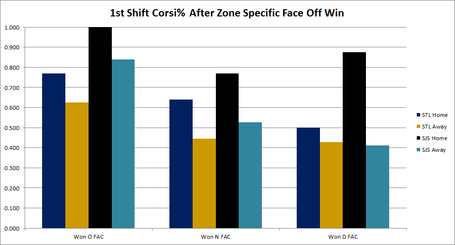 The table above represents the Corsi% (Proportion of goals, shots, misses, and blocked shots directed at the opposing net) the first shift after a face off win in a particular zone. I define "First Shift" as any data that shows up in the NHL's Play-By-Play feed before any player has changed. The data is grouped by zone, broken into an offensive zone face off win, neutral zone face off win, or defensive zone face off win (excluding any face offs lost). Additionally I grouped the data based on whether a team was home or away. And therefore, the STL home / SJS Away data has 3 games worth of information, where the SJS Home /STL Away only contains 2 games.

After my first post, it appeared as though STL (as we predicted) controlled a lot of play through the neutral zone. I believe the Sharks coaching staff made a few minor adjustments, were able to get the matchups they were looking for, and fared much better on SJ ice. Actually, a hell of a lot better.

The last column is the best indicator of neutral zone play. A team that wins a defensive zone draw must play through the neutral zone, and thus gives us a good idea of how well they do that. As you can see in the games played in St. Louis (navy/blue for STL, teal for SJS) STL was able to slightly out-edge the Sharks. However, in SJ, the tables turned quite a bit. In the 14 shifts following a defensive zone face off win, the Sharks were able to generate 4 shots and 3 missed shots, in 6:20 of time (relatively close to power-play rates). Ironically the lone Corsi event for STL was a goal, 1 of the 2 even strength goals they would score in SJ.

In the above chart we can also observe the difference in line matchups. By selecting only the first shift we can see which coach was able to take advantage of the last change. On home ice the Sharks out shot the Blues by a considerable margin, 47-19, and out scored the Blues 2-1, although score effects significantly confounds the importance of this feat.

The table above breaks the data into a rate, and doesn't specify by face off win, but a draw in the zone. Corsi/60 represent the plus-minus of all shots, adjusted to represent a complete game. The first two columns still represent 1st shift. The table includes 150 minutes of EV 1st shift data, and 160 minutes of EV OTF data. It is therefore more reliable, but score effects have overrun much of this data. Score effects refers to the notion that teams that are trailing in games, especially in the later periods, out-shoot their opposition consistently. As was the case in this series, and every other Western Conference series.

Ultimately it is difficult to separate any statistic from noise over a 5 game sample. Yes, the PK was terrible and is the most identifiable reason as to why the Sharks lost. The truth is that over 5 games, that could have happened to any team. It was just more likely to happen to the Sharks. The problems created in the regular season proved too costly to overcome. But at it's core this is still a good hockey team. Pitted head to head with one of the league's truly elite the Sharks came out very well at even strength, something that bears repeating. Even strength success is the type of success that is sustainable. Although the clambering media will shout about goal tending and special teams, and these aspects of the game have their place, they veil true team strength. Strength within the Sharks that I still believe in.