Dallas was all over the Sharks in the first period, generating the first four scoring chances of this game and keeping play in the San Jose end for much of the frame. The Sharks were able to slowly wrestle away that advantage after denying the Stars any chances on a substantial 5-on-3 power play as well as limiting them to just two chances on the 5-on-4 opportunity bookending that game state. The top line had a whale of a game - they played about 10 minutes against Jamie Benn at even strength, started 10 of their 15 EV shifts in the defensive zone (excluding neutral zone starts) and yet were on the ice for just two EV chances against, both of them at the end of the game with Kari Lehtonen pulled for Dallas.

(As always, 6v5 chances not included in "best" and "worst" totals.) 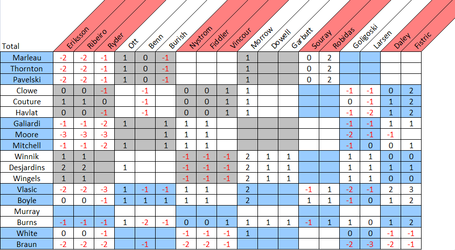 6v5 numbers are included in this chart which is why the top line's performance against Mike Ribeiro looks ugly when in reality they were just on the ice killing the clock with Lehtonen pulled. Glen Gulutzan really targeted the Moore line with his top unit and rightly so in my opinion - they're almost definitely the Sharks' weakest line. Justin Braun with a rare terrible outing, doubt it's something that continues.