Special thank you to Eric Lindquist and Nathan Moon for this opportunity. Enjoy and be sure to follow Nathan Moon on Twitter @moon101010.

How is the hair doing since having it cut off a couple weeks ago for Locks of Love?
{Laughs}. It’s growing in quite well. It took a little getting used to but I had my hair shaved for the playoffs last year in juniors so it’s good to have it short.

Along with Curt Gogol, the two of you grew your hair out all season for Locks of Love. How did that come about? Did you guys volunteer or were you selected?
It was a little bit of both. They approached us because we had a shaggy look to our hair already and we decided to grow it out for the season because Locks of Love is a great cause.

For Sharks fans that haven’t had a chance to see you play in person or on the AHL Live feeds, how would you describe yourself as a player?
I would say I’m a little bit of a gritty player with skill. A good two-way player that can win key face-offs while being solid defensively and good around the net.

I read you honed your hockey skills for your hockey future by playing in the Quinte AAA Red Devils System in Ontario and for the Wellington Dukes of the Ontario Provincial Junior "A" Hockey League. What sticks out most to you about your early hockey days?
Going all the way back to Tim Blake, who was my AAA coach, and all my teammates, if it wasn’t for them, I wouldn’t be here today in Worcester. Getting to play for Wellington was a great experience. The team was close to home and to get called up to play for a great organization in Wellington when I was 14-15 years old was just an unbelievable experience.

Is it true you were quite the running back in the Belleville Minor Football League? What made you pursue hockey over football?
{Laughs} Yeah, I started playing football in sixth grade and played into high school. My buddies said one day, "Let’s go play" and I was like, "Why not?" I fell in love with it and was pretty good at it. I was a quarterback in sixth grade then got moved to running back/half back. The coach asked me to play again in high school and I said, "Ok." However, I gave football up in 10th grade because I knew I had to pick between football and hockey and knew it would be hockey. Its always been a dream of mine to play in the NHL and I wanted to chase that dream.

How did you become interested in hockey?
At a very young age, three or four, my mom and dad put me in skates and put me out on the ice. I joined a recreation hockey league and fell in love with the game. I just loved going out there and playing.

The Pittsburgh Penguins drafted you in the fourth round {120th overall} of the 2008 NHL Entry Draft, which was their first pick that year. Your teammate James Livingston was also drafted that year in the third round {70th overall} by the St. Louis Blues. Did you attend the draft or did you find out you had been drafted in a way similar to Livingston, who was texted by his Soo Greyhounds teammate as he was outside playing basketball?
Not for the NHL Draft. I was at the draft in Ottawa that year and it was a great feeling when I heard my name called. I did have a similar experience as Livingston when I was drafted into the Ontario Hockey League {OHL}. I was shooting pucks outside with my brother and my name popped up on the internet saying I had been drafted. I got the call five minutes later {laughs}.

How would you describe your time in the OHL with the Kingston Frontenacs, where you played for five seasons {2006-11}, led the team in scoring your last four seasons {2007-11} and had Doug Gilmour as your coach for your last two-and-a-half seasons?
It was an unbelievable feeling and time for me. I couldn’t have asked for a better situation as a 16-year old with Bruce Cassidy as head coach. He is now the head coach of the Providence Bruins of the AHL. He had the most confidence in me and it just grew from there. I did hear the trade talks every year but general manager Larry Mavety told me I wasn’t going anywhere. One day, I got called into a meeting and he {Mavety} told me that I was a Frontenac for life. Kingston is a second home to me as my second family is there with my great friends.
Having Doug Gilmour as a head coach was another great feeling and experience. He came in midway through my third season and taught me a lot of little things like how to win key face-offs. If it wasn’t for him, I wouldn't be here in Worcester.

In your rookie season with the Frontenacs {2006-07}, you helped lead Team Ontario to its first Gold Medal since 1991 at the 2007 Canada Winter Games. What was that experience like?
My first year, I didn’t know what to expect. Luckily at Christmas time, Team Ontario gave me a call and I was on the team. I got to play with Steven Stamkos on the top line and just found my way. Winning the gold medal was just an unbelievable experience.

Sharks fans may not know this but you and Sharks defenseman Taylor Doherty have been teammates since you were teenagers on the Frontenacs. What has it been like continuing your hockey careers together?
It’s pretty funny we are still teammates {laughs}. When I went to San Jose’s camp, I knew Taylor would be there because he’s been a high prospect of the Sharks’ for a couple years now. Taylor did a lot for me by taking me under his wing for a bit and giving me the comfort level to play here and do my thing. Looking back, when he walked into the Frontenacs locker room at age 15-16, I remember saying, "Who is this giant?" {laughs}.

Ethan Werek, who now plays for the Portland Pirates, sometimes roomed with you on the road when with the Frontenacs. Is that why you were smiling when you fought him for the first time earlier this season?
No {laughs}. He’s not a tough guy and what I remember most from that game was that someone on the Pirates had me in a headlock and I felt my chin strap being pushed into my throat. When I got out of the headlock, I saw Ethan and he said, "Let’s go." I said, "Are you serious?" and he said, "Yeah" {laughs}. I think that was his first fight of the season. 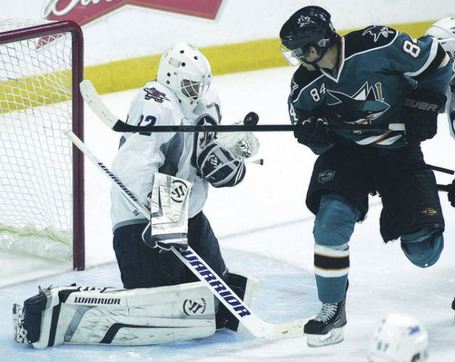 Despite leading the Frontenacs in scoring {27-42-69} for the third consecutive season in 2009-10, the Penguins relinquished your rights by not signing you to a contract before the midnight deadline on June 1, 2010. What went through your mind when that happened?
I was a little disappointed. I thought for sure I had earned a contract with them but I knew before hand they might not sign me. I tried to take the positives out of it and went back to the Frontenacs for a fifth year. In that fifth year, I worked on things in my game to get me to the next level and it led to where I am this year in Worcester.

You returned to the Frontenacs for the 2010-11 season and again led the team in scoring {32-42-74}. Once the OHL season ended, you played in seven playoff games for the Bossier-Shreveport Mudbugs of the Central Hockey League {CHL} and won the Ray Miron President’s Cup with the team in their last season of existence. Would it be fair to say you played with something to prove that season?
Sure. My fifth year in juniors, I played my game with a chip on my shoulder because I wanted to show the Penguins I should’ve been offered a contract and prove them wrong. I had to do what was best for me and hopefully get a chance with another team.
Playing with the Mudbugs was another unbelievable experience to tell the truth. I didn’t know what I was going down there for or what to expect because I hadn’t heard of it before. I went there for the playoffs and there was some great hockey. We beat the Colorado Eagles 2-1 in game 7 to win the CHL championship and seeing the happiness on the guys’ faces was just an unbelievable feeling.

On Aug. 9, 2011, it was announced the Cincinnati Cyclones of the ECHL signed you for the 2011-12 season. A month later, you were playing for the San Jose Sharks at the 2011 Young Stars Tournament in Penticton, B.C. How did going to San Jose’s training camp on a tryout come about?
Sharks scout Bryan Marchment called me the day after the draft and asked me if I wanted to come to the rookie tournament. He had seen me play a lot and of course I said yes to the opportunity {laughs}. I couldn’t say no. When I got to Sharks camp, I wanted to prove and show them I could play at the next level and earn a contract.

You scored two goals in the second period against the Canucks in the Sharks’ final Young Stars game and finished tied with Brodie Reid for the team lead in scoring. What was your gut feeling after the tournament had ended about your chances of signing on with the Sharks organization?
I knew I had to show them I could play defense, which would lead to offense. I had a good feeling I would be able to stick around Sharks camp and not get sent home yet.

What have you enjoyed most about playing in Worcester this season? Would it be fair to say the season has flown by?
San Jose is a great organization and they do all they can to make you feel at home. I can’t explain how happy I was to get a contract and play here in Worcester this season. The whole team took me under their wing when I got here and the fans and city have been great.
It’s funny you should mention the season flying by as Coach Sommer said the season was going to fly by whether you were a first year or fourth year player. And he was right {laughs}. The season has flown by. I think there is what, six games left already?

What has been the biggest difference in going from the OHL to the AHL?
Consistency. I’ve had a couple of ups-and-downs this season. Also, you’ve got to battle in practice to be in the lineup. In juniors, you’re always in the lineup regardless. Here, you’ve got to earn your spot in order to move up. I began the season wanting to prove myself to get ice time and I’ve continued that all season.

What has been the best piece of advice you have ever received?
Just to never give up and always stay even headed through the ups-and-downs of a season. Don’t get too high if you’re on a hot streak and don’t get too low if struggling. Just keep working hard.

What do you like to do in your downtime?
There are a couple lakes in Worcester so we do some fishing. Usually we sit around and play NHL on the Xbox, watch TV or go out on the water on a paddle boat and enjoy the scenery.

What did you think of your NHL12 video game rating?
I was quite surprised because I didn’t know what to expect {laughs}.

Favorite sport {other than hockey}..... Baseball

Favorite board game..... Not really

Favorite pro athlete..... Too many to choose from

Favorite restaurant..... East Side back in Canada