The Sharks were in the position of struggling to make the playoffs well into the season's final week for many reasons but probably the most significant was the fact that they lost quite a few games in which they clearly outplayed the opposition and likely deserved to win. So it's somewhat fitting that on the night they clinched a playoff spot and earned two points via coin flips to stay in the hunt for the division title it was in a tilt where they were substantially outplayed.

San Jose was outchanced 8-3 in the first period and 9-4 in the second before earning a 3-2 edge over the Kings in what was an extremely low-event final frame of regulation play that oddly featured almost as many goals as it did scoring chances. But, for once this season, the PDO gods smiled upon San Jose and allowed them to a win a game they were outchanced 19-13 in overall, including an 11-7 beating at evens. Despite the outcome, this game was more evidence the Kings have evolved into a scary, scary hockey club that no one should want to face in the playoffs. 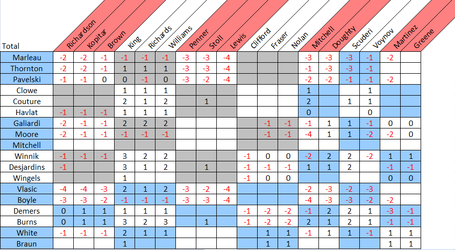 The top line got their lunches eaten at even strength by just about anyone Darryl Sutter chose to throw out against them and the same goes for the Vlasic/Boyle pairing. Where the Sharks as a whole were really able to make some inroads 5v5 was against the Mike Richards line for L.A. Richards has been straight-up dreadful this season when not paired up with his BFF Jeff Carter - Richards has earned 51.3% of the Corsi events when on a line with Carter but only 47.6% when on the ice with anyone else on the Kings roster.
Daniel Winnik continues to impress the hell out of me. The two penalties aside, he started 73% of his EV shifts in the defensive zone, spent about a third of his ice time out against Anze Kopitar and another third out against Mike Richards and still somehow managed to be one of the few Sharks to finish on the positive side of the ledger in chances.