Sharks clinch 7th seed with 3-2 OT win, will face Blues in first round

Share All sharing options for: Sharks clinch 7th seed with 3-2 OT win, will face Blues in first round

The last time the St. Louis Blues won a game in the Stanley Cup Playoffs, it was against the San Jose Sharks in 2004. Dan Boyle's backhand goal against Jonathan Quick with a minute remaining in overtime ensures St. Louis a chance to get their next playoff win against the Sharks as well.

A dominant, new-look Kings team kept the play in the Sharks' end for much of the night, as they did at the Staples Center on Thursday and as they've been doing at an unparalleled rate since the trade deadline. Despite that, the Sharks were able to do a surprisingly good job of limiting the Kings to a handful of dangerous opportunities this time around, keeping the chance count even 8-8 through two periods and winning the overall battle 14-13 at the end of the night (chance summary after the jump). It was again a contest rife with special teams play and questionable hits, including a check from behind by Mike Richards on Logan Couture. None of the five goals in the game were scored 5v5 but, apart from the bevy of penalty calls, it was about as exciting a game and as good a primer for playoff hockey as you could ask for.

But, realistically, no one cares about that game or the regular season anymore. The only relevant result of the 3-2 win is that the most wonderful time of the year, the Stanley Cup Playoffs, is upon us and San Jose will face off against pre-lockout nemesis St. Louis. As a Sharks fan, you never want to actively root for the team to lose...except perhaps tonight.

Where the Canucks, who the Sharks would have played had they lost to Los Angeles, have had their struggles with possession this season, particularly in the new year, and had many of their warts masked by unbelievable goaltending, the Blues have been the best possession team in the conference. On special teams, Vancouver has allowed more shots against per minute on the PK than all but eight teams in the NHL while the Blues are sixth-best at shorthanded shot suppression (tops among Western playoff teams) although the Canucks far outstrip St. Louis in their power play effectiveness, with regards to generating both shots and goals.

Which isn't to say the Sharks should have intentionally thrown this game; it was really a pick-your-poison scenario as the the two-time defending President's Trophy champion Canucks are obviously still a great team. There's little doubt, however, that the Blues are a better one and they've done a number on the Sharks in the four meetings between the teams this season, sweeping the season series and outchancing the Sharks 44-25 in the three since Ken Hitchcock was hired.

We'll have a lot more on what should be a terrific series here at Fear the Fin in the coming days. Aside from Detroit, there probably isn't a team in the league the Sharks have more of a historic playoff rivalry with than St. Louis. So instead of inundating you all with more numbers and analysis that suggest doom and gloom awaits the Sharks on the horizon, here's Marc Bergevin throwing the puck into his own net. 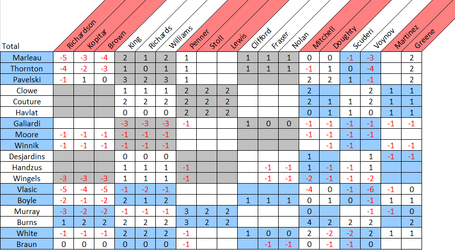