The 2012 Stanley Cup Finals begin tonight in Newark with the New Jersey Devils and Los Angeles Kings, two decidedly unlikely combatants as the 6th and 8th seeds in their respective conferences, facing off. As painful as the Kings' run has been for Sharks fans who hope that San Jose isn't the last team in California without a Cup (and the cognitive dissonance that would stem from having left-coast solidarity with the similarly Cupless Canucks would be unsettling), our group of writers here at FTF provided their Stanley Cup Final picks to go along with some charts and numbers detailing the Devils' and Kings' playoff runs so far. For a full glossary of terms used in this post, check out our Western Conference playoff preview from earlier this postseason. 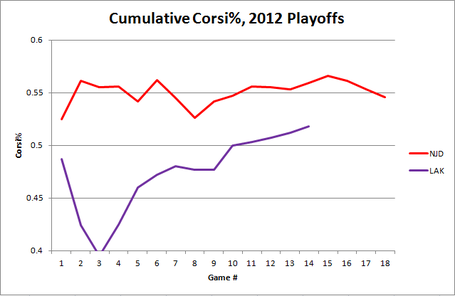 SnarkSD: Off the top of my head I can't think of an 8th seed that has ever won the stanley cup, but if there ever was a team poised for success it is this year's western conference 8th seed. As covered time and again, LA wasn't scoring goals earlier in the year, and this was mostly due to poor shooting percentages. This truly masked how productive the Kings can be. I really like Parise, but on a team level, the Kings have too much fire power. Kings in 6.

Jon Allred: If LA wins, Sharks will be only California team to not have a cup. Plus, I like the fact Devils have gone through adversity in playoffs whereas LA hasn't. Devils in 6.

jwizzle241: I'd love for the Devils to walk away with a win here, but I don't see anyone stopping the Kings. It's hard to find a weak spot on the Kings now that Jack Johnson's in Columbus. Speaking of that trade, Carter gives them a top 6 that can compete with anyone in the league. These aren't the passive defensive Devils of years past, and their forwards have been great, but I think LA can shut down their offense enough to take home the cup. Kings in 6.

mymclife: What I want to see happen is the Devils winning in seven games, with at least three overtimes. But that's about as likely Jonathan Bernier or Johan Hedberg getting a start. The Kings are deep: a great top six, a committed defense, and a goalie that's playing out of his mind. They've only played 14 games - two games above the minimum - dispatching teams playing a wide variety of styles with ease. On the other hand, the Devils have a dynamic offense and the legendary Martin Brodeur, as well as the Philadelphia bump (every team that has eliminated either the Flyers or the Phillies in the playoffs since 2009 has gone on to win the championship). However, I don't seem them being able to overcome the Kings, although I do see them as the biggest challenge for the Kings thus far. Kings in 6.

Ivano M.: The Kings are just cruising right now, and can't see the Devils being able to stop them. Remember how the Devils barely beat Panthers while the Kings made President's Cup winner look like Team Italy? LA has the confidence, their goaltender most likely already secured a Conn Smythe no matter what, and they've been the best team in the league since February. The only chance I see for this series to be any close is if Devils win the two first games, which is possible, given Brodeor experience and home ice. If LA steals one, the series is over. Kings in 5.

idunno723: So far in the 2012 playoffs both the Kings and Devils have won 12 games so clearly this is a very even-matched series (you're welcome for the stunning analysis). Personally I would prefer the Devils winning the series, so that pretty much means the Kings will. West-coast bias maybe but I've been very impressed with the Kings taking down Vancouver and St. Louis. Kings in 5.

The Neutral: We should have seen this coming. The Kings were scary good after hiring Darryl Sutter and were flat-out the best team in the league after dumping Jack Johnson at the trade deadline. Their throttling of the Coyotes in the conference final was the most lopsided playoff series I've seen since the Sharks steamrolled the Avs in 2010. And that Avalanche team didn't belong anywhere near the playoffs while the Coyotes, who granted aren't a great team either, advanced to the final four. The Devils were one of the best possession teams in the East all year long but were held back courtesy of another horrible year from Martin Brodeur. He's caught fire in the playoffs, making the Devils even more dangerous and a legitimate threat to L.A. here but New Jersey has yet to face a team on the Kings' level and everything the Devils do, Los Angeles can do better. Kings in 5.