Expectation vs. Reality: A look at an inaccurate label Patrick Marleau has carried his entire career

Share All sharing options for: Expectation vs. Reality: A look at an inaccurate label Patrick Marleau has carried his entire career

Fans always try to rationalize successes and failures, and this often falls on a scapegoat. Most of the time it is the top goal scorer or goaltender, as they have the most obvious impact on winning games. But as has been discussed a lot lately, goaltenders and high profile goalscorers may impact the game tremendously, but it's not something that's likely to be predictable.

For many Sharks fans the aggravation of a loss, or lost season has long been the fault of either of these two players mentioned above, with most of the attention paid to Marleau. Consistency seems to be his oft cited criticism, with a multitude of explanations including laziness, heart, and a lack of motivation. Recently Kurz had this to say about Marleau's season.

Marleau didn’t have nearly enough of an impact down the stretch, when top players find a way to make a difference. Far too often in March and April, Marleau was invisible while his team struggled to make it into the postseason, and his disappearing act continued in the playoffs when he was not a factor whatsoever. He finished the regular season on a four-game point streak, but prior to that, had just two goals in 20 games.

...If the Sharks truly want to change the fabric of their team and atmosphere surrounding it, and prove to their fans that last season was simply not acceptable, finding a way to move Marleau should be option 1A. It might prove to be difficult in that Marleau still reportedly has a full no-movement clause and two years remaining on a contract that pays him $6.9 million, according to CapGeek.com, but there are ways around such things, such as buying out his contract. A potential new CBA could also provide further options that aren’t available at present.

I'll give Kurz the benefit of doubt that he was playing devils advocate with Brodie, and stirring the pot a little, but there's no denying his comments are vulgar, and quite possibly unfounded. After the jump we will try to define criteria for consistency, and apply this to Marleau's goal/game rate to see if his label is accurate.

Before we can look at Marleau's career we need to first define consistency. This is by far the most contentious part of this article, as consistency is in the eye of the beholder. Consistency, at least in hockey, goes hand in hand with expectation. So what expectations should we have for the frequency for which skaters score goals?

At the end of the year I made the argument (and certainly not the first) that on a team level goals/game follows a Poisson distribution. I think it's reasonable to extend this idea to the individual skater. This in essence is how I define consistency. A player with an intra-game goals/game rate that follows Poisson distribution is completely expected. A player who is streaky will likely deviate from this distribution. In other words a streaky player will have more 0 goal games, less 1 goal games, and more multiple goal games than predicted by the Poisson distribution. Put another way, we don't expect skaters to score like a clock every "x" games based on their goal scoring rate (goals/games), instead we expect a certain amount of randomness to produce streaks. A consistent goal scorer will not deviate significantly from an expected amount of streaks for his goal scoring rate.

Perhaps intra-game scoring isn't really the issue. We will also look at expected number of games without a goal given a goals/game rate, and compare that to an expected distribution. We can approximate this distribution using probability theory. If a player scores goals at a certain rate, we can say his probability of scoring in any game is approximately totals goals / total games played. To find the expected number of games without a goal (ie. schnied, goal drought, streak) we take the exponential of the number of games, by the probability that the player wont score a goal. The formula looks like this;

The 2 methods above imply goal scoring follows the same distribution as the craps table at Ceasear's Palace, it's something you might find hard to accept. But it's been consistently validated in large sample studies. This further confirms that the true measure of a player shouldn't revolve around frequency, which is subject to variation, but on rates.

Armed with a definition of consistency, we can now analyze Marleau's career numbers to determine if he has in fact been streaky. We're essentially conducting an equivalence study to determine if Marleau's goal scoring frequency is any different than expected from random chance. We will use Joe Pavelski, the American Hero, who has not carried the "streaky / inconsistent / lazy / blinky" label as our control. (Ie. we will analyze his numbers to see if they are significantly different from Marleau's, confirming or busting our results.)

The first set of graphs below are what I define as intra-game rates. This is the frequency at which 0 goals are scored, 1 goal is scored, 2 and so on. We can generate a Poisson distribution for Marleau based on his career goals/game rate, and then compare his actual numbers to that distribution. In some ways, it's similar to comparing a robot Marleau to himself. The robot Marleau will score goals at the same rate, but with distribution that we would expect from an absolutely consistent NHL skater (whether elite or average) who's goal scoring follows an independent and random interval between goals.

Error bars represent 95%CI. Each data point represents the frequency (y-axis) Marleau has had (x-axis) 0, 1, 2, and so on goals in a game.The data above represents post-lock out career stats for Marleau. 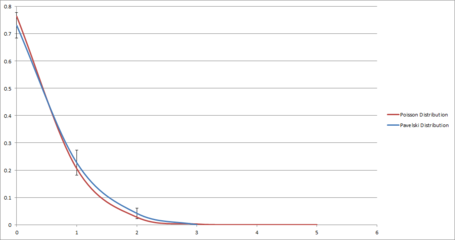 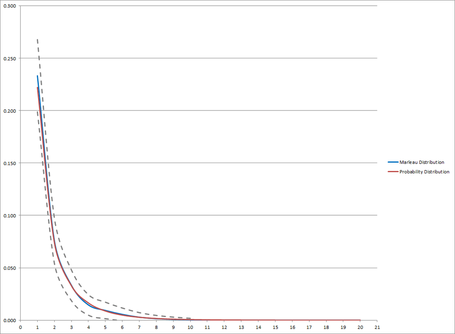 The graphs and tables above detail Marleau's tendency to "disappear" (Ie. the frequency with which Marleau went "x" amount of games without a goal). But as we can see from the graphs above, it doesn't seem as though Marleau "disappears" any more than as would be expected given his goal scoring rate, nor Pavelski. This suggests that Marleau is as "streaky" as Pavelski, both having droughts that have been completely within expectation given their scoring rate, and thus neither has shown any significant amount of inconsistency that is out of normal. (Chi-Square = 1 for both Marleau and Pavelski)

Some may inject an important point that Marleau's inconsistent label really started as a young player, and has been something that he's never been able to shake. But after going back and looking at his pre-lockout numbers, he still shows no significant difference from the distributions above. The only interesting difference is his scoring rate, which has increased from 0.246 to 0.333. This doesn't suggest that he's been more consistent, but rather, he's been a better player, and scoring more in general.

The last paragraph above gets at the exact problem that Marleau's critics have in regards to his play. If you calculate Marleau's post lockout career goals/ career games, you come out with approximately 1 goal in 3 games on average. I think most detractors have an expectation that he will score exactly 1 goal every 3 games, and a deviation from this rate suggests a decline in play. Anything above this marks playing "up to his true potential." When in reality, we know that deviation about this mean is expected. To drive home the point; if you flipped a coin100 times you would expect a streak of [either head or tails] 5X or more in a row approximately 6 times. You wouldn't conclude that the coin is somehow loaded or different, but just a product of normal expected variance.

In fact, we would expect Marleau to go on a 3 game or more scoreless streak roughly 8 times in a season, 5 games or more approximately 4 times, and 8 games or more approximately once. Kurtz attempts to cherry picks his example above by starting the game after a goal, and going up to a game before a goal. In reality Marleau had a streak of 5 games without a goal, then 8 games without a goal, followed by 5 games. Last year Marleau had slightly longer goaless streaks than predicted, but its certainly not outside of what is statistically expected, and his career totals suggest that this hasn't been a consistent problem for him.

We're constantly surrounded by variance driven by randomness. In the hockey world rules are created to further augment things like Sh% and Sv% closer to chance. We've selected the worlds greatest humans at using a stick to throw some rubber at a target, pitted against the worlds greatest humans at stopping objects from going into a target. This maximizes the influence of variance, while subjecting talent to be borne out only in huge samples. Outlier's exist, but are rare, and the majority follow a predictable distribution.

The word random to describe these distributions is somewhat misleading. It's not by chance that the frequency with which Marleau scores goals follows a Poisson distribution. He is one of the best goal scorers in the world, he just happens to play against some of the best goaltenders/defensmen in the world also. The salary cap, UFA, and league parity has driven the balance of talent. This balance of skill is similar to 2 equally strong men in an arm wrestling match, they may appear to balance each other out so that neither has the strength to tip the battle, but this doesn't indicate that both men aren't strong, or that strength doesn't win the match. The match results would likely be even, the same as flipping a coin, but we shouldn't take that to mean winning is accomplished randomly, it's just predictably random, or more accurately phrased, follows a binomial distribution.