Although the Sharks signing Adam Burish certainly wasn't akin to them landing Zach Parise or some other prized free agent, it's sometimes difficult to thoroughly and honestly evaluate a move made by the franchise in the heat of the moment. At least for me, anyway. So now that we're a full 24 hours removed from the Burish signing, I thought it might be useful to look at what Burish brings to the table and what the implications of his addition might be to the roster as a whole.

As I wrote yesterday, at even-strength, Burish was deployed primarily in the defensive zone during his two years in Dallas, starting 64% of his pertinent shifts in his own end from 2010 to 2012. His first season with the Stars, who were then under coach Marc Crawford, saw Burish utilized as purely a defensive specialist 5v5. That year, he began 70% of his non-neutral 5v5 shifts in the defensive zone, highest among Dallas forwards, and also faced the highest quality of competition on the Stars' forward corps. Although Burish, along with frequent linemate Steve Ott, was predictably dominated territorially, his deployment allowed Crawford to provide the likes of Brad Richards, Loui Eriksson and Jamie Benn with significantly easier minutes as they were afforded a substantial amount of offensive-zone starts against weak opposing players.

With Crawford fired and replaced by Glen Gulutzan behind the Stars' bench for the 2011-12 season, Burish saw his role and deployment somewhat change. Rob Vollman's excellent Player Usage Charts feature demonstrates it best: 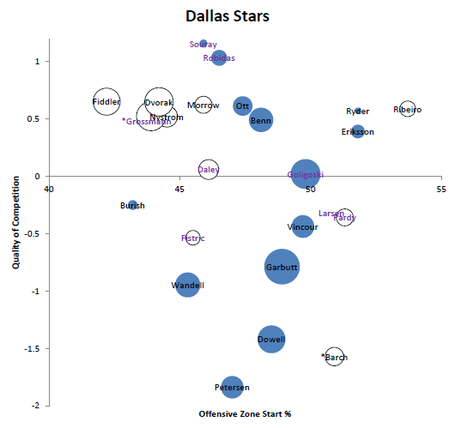 As you can see, Burish was still receiving some of the most difficult zone starts among Dallas forwards but was doing so against far lesser competition with the line of Eric Nystrom, Vernon Fiddler and Radek Dvorak operating as the Stars' primary tough-minutes checking line. As the slight blue bubble around Burish's name indicates, he was able to turn those minutes into a positive zonestart-adjusted Corsi, meaning the puck spent more time in the offensive zone than the defensive end when Burish was on the ice 5v5 after correcting for starting position, a definite positive sign.

But what does this mean for how Burish will be deployed on the Sharks? We've discussed many times on this site that Todd McLellan has always preferred to match his lines power versus power, with Joe Thornton and Joe Pavelski facing other teams' first lines and the team's second line facing their opposing counterparts. If McLellan sticks to that deployment strategy, Burish could be seeing similar minutes to that which he played last season: starting primarily in the defensive zone but doing so against other teams' lesser lights. While that would help the Sharks seeing as Logan Couture's line would likely benefit from easier starting positions with Burish's line doing the own-zone grunt work, especially since Burish proved this past season he can drive play in the right direction while being used in those minutes, a possibly preferable option would be for McLellan to transfer Couture's defensive responsibilities to whatever line Burish plays on. Have that unit draw the second-toughs while starting most frequently in their own end and allow Couture and company to dominate in easy minutes.

Burish obviously wasn't brought in to contribute much offense but it's worth nothing that, at least in terms of 5v5 points per 60 minutes, Burish did produce at a top-nine rate last season in Dallas with his 1.38 5v5 P/60 ranking 234th among regular forwards. That's certainly nothing to write home about, and most of it stemmed from top-six duty alongside Benn, but it matched the scoring rates of guys like Ryan Getzlaf and Devin Setoguchi last year so there's a positive. Also notable, although we're quite a few years removed from it now, is Burish's shot rate as a member of the Blackhawks in the 2008-09 season when he averaged 9.7 shots on goal per 60 minutes 5v5, an absurdly high rate for someone of Burish's skill set. Granted, he was playing extremely sheltered minutes on a powerhouse of a team but he's been more than a marginal offensive contributor in the past. Realistically, though, Burish's effectiveness in San Jose isn't going to be gauged by how successful he is at putting the puck in the net.

As discussed yesterday, Burish seems to be one of the few players in the league truly capable of suppressing opposing shooting percentage. The effect that has on the value he provides his team isn't clearer anywhere than on this chart of Burish's key defensive stats over the past three full seasons he's played in the NHL:

What stands out to me here is that, although Burish has never been a great possession forward and, considering the butter-soft even-strength minutes he was playing in 08-09, has never been all that impressive at suppressing shots, he's consistently managed to help his team allow very few 5v5 goals. And, at least the past two seasons, that's been the case despite starting the majority of his shifts in the defensive end. I think it's safe to draw the conclusion that he is one of the rare players capable of influencing opposing shot quality, making him a very valuable defensive option 5v5 for the Sharks.

Of course, more relevant to the Sharks than even-strength defense is penalty kill contributions. It's tough to evaluate those on an individual player level and, although there isn't much guarantee of predictive value, what I like to use to do so are a player's time on ice shorthanded in addition to the volume of both shots and goals their team allows while that player is killing penalties per 60 minutes.

Team rankings are among forwards who skated at least a minute per game shorthanded that season. Marc Crawford leaned on Burish quite a bit in all defensive situations and the penalty kill was no exception as Burish averaged more shorthanded minutes per game than any other Dallas forward in 2010-11. The results were less than spectacular and they were even worse this past year for Burish in a more limited shorthanded role under Glen Gulutzan. It's tough to draw many positive conclusions about Burish's penalty killing ability based on the numbers here although Burish's skating ability, aggressiveness and apparent talent for limiting opponents to low-percentage shots at even-strength seem like they should add up to a competent penalty killer. Comments made by Doug Wilson and Burish when announcing the signing to the media yesterday indicate the Sharks see him in that role next season and although his track record 4v5 isn't stellar, it's still a possibility he could provide value to the team in that game state.

Ultimately, although this is probably stating the obvious, the value the Sharks get out of Burish's contract will depend almost solely on how they decide to use him. If they're able to construct a capable checking line around him that Todd McLellan and his yet-to-be-determined staff bury with defensive zone starts against opposing teams' second lines to afford Couture, Ryane Clowe and Martin Havlat far easier minutes to thrive in, that's a solid move. Doubly so if he adds value on the penalty kill similar to that which he provided to the Hawks his final year in Chicago. If, instead, McLellan continues to use his lineup the same way he always has and Burish either plays against third-tier competition or on the team's fourth line, I don't understand why he was targeted. I'm not saying either deployment tactic is a sounder strategy--it's impossible to judge something like that without seeing it in action--but that's something Doug Wilson hopefully discussed with McLellan before signing Burish since, in retrospect, it doesn't appear he did so last summer when inking Michal Handzus to that two-year deal. Still, it's clear that Burish is a better player than Handzus and can be an important piece of the puzzle as long as the Sharks fit him into the right place.