Share All sharing options for: Genesis of the 2012-13 Sharks Roster

It's late July, player movement has appeared to slow down, and there's almost nothing hockey-related to talk about except for the CBA talks, and LA LA LA LA I CAN'T HEAR YOU THERE'S NO SUCH THING AS A LOCKOUT. Which means, of course, it's time for what has become a regular feature: a chart that traces how today's roster came to be, through various trades and signings and draftings. A roster history chart, if you will. You can check out last season's version here, and the original here.

Click on the image below to view the full-size version. Fair warning, this thing measures around 3000x3000 pixels. 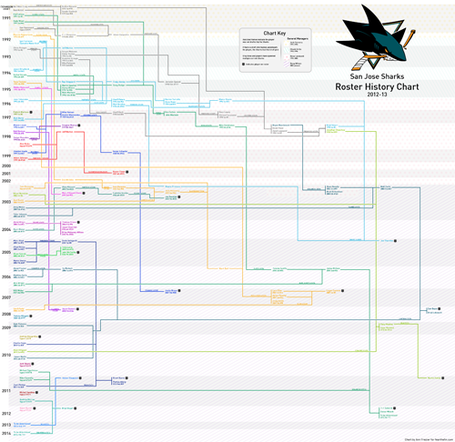 This chart uses the roster as provided by the San Jose Sharks official site as of July 21, 2012, with one alteration (for whatever reason, T.J. Galiardi was not listed). So while I may have opinions on who will and won't actually make the team, I just went with the official site to make things easier.

And without further ado, analysis of what you are seeing and attempting to comprehend.

The combination of Doug Wilson's long tenure and position as the current general manager has skewed the numbers a bit, but it's still interesting to see how each of the Sharks' four general mangers have affected the current roster.

Both this season and last season had 41 draft picks originally allocated to the Sharks help compose the roster. Fewer trades are used to make up the roster - 52 this season in contrast to 54 last season. That difference can be explained by the decision not to re-sign Torrey Mitchell, who accounted for four trades, the trade for Brad Stuart, and the trade and subsequent re-signing of T.J. Galiardi.

The Sharks also decreased in the number of free agents, going from 13 free agents last season to 10 this season.

In order to construct the current roster, trades were made between the Sharks and every other franchise in the NHL except for the Edmonton Oilers, Los Angeles Kings, and Washington Capitals - something that has remained unchanged since last season.

The teams that Ferreira traded most with were a three-way tie between the North Stars, Red Wings, and Canucks. Grillo preferred trading with the Panthers, while Lombardi liked the Devils. Doug Wilson's most productive trade partners are (surprise, surprise) the Wild and the Flyers.

The earliest player transaction that affects today's roster is Bob McGill, selected from the Chicago Blackhawks in the expansion draft. If you disregard the expansion draft, the Sharks' first-ever draft pick Pat Falloon holds that place of honor, eventually leading to T.J. Galiardi (which is why, in this writer's opinion, he must either be retained beyond this season or traded for some player that will continue that lineage forever).

It is interesting to note that there were absolutely no transactions made after the 2004 draft and before the 2005 draft. While that was during the lockout and so people would assume that there would be no moves made, if the CBA talks degrade into a lockout like some people are predicting (that I pretend not to see), there have still been plenty of moves made by GMs around the league since this year's draft. Now, it could just be that none of the players acquired during that period were retained or traded for an asset, but it's still interesting.

One section of the chart - the gray section - is responsible for three current roster players, despite the most recent endpoint is a 1993 draft pick. And not just any three roster players: Joe Thornton, Dan Boyle, and Martin Havlat have ties to this section. All three can be traced back to the 1993 1st round pick (you may know him better as Chris Pronger), Ken Hammond, Bob McGill, and Not Mike Craig.

Not Mike Craig is, personally, my favorite part of this entire chart. The Sharks are a unique expansion franchise in that they not only had an expansion draft held for them, but also a dispersal draft. While considered an expansion team, they technically split off of the Minnesota North Stars (which had previously absorbed the first George Gund-owned franchise, the Cleveland Barons). When the split happened, there was a dispersal draft of the North Stars players held between the Sharks and North Stars. The North Stars really wanted to keep Mike Craig, so they gave the Sharks their 1991 2nd round pick and 1992 first in exchange for the Sharks not drafting Mike Craig. The Sharks accepted, and because of Not Mike Craig, were able to eventually trade for Thornton, Boyle, and Havlat. Oh, and Owen Nolan. Not bad for not doing anything.

Here is my monthly reminder that the Sharks basically got Logan Couture for Mark Bell and Vesa Toskala. Thanks, Toronto Maple Leafs!

Brad Stuart has the new-found distinction of appearing on this chart twice, and being traded for a current roster player. He is the only such player to do so on this chart.

Doug Wilson must be a fan of Jaws, because he loves the summer blockbuster. All but four trades he made to affect the current roster were made during the summer. Only one was not a deadline deal, and I'll give you one guess as to who he traded for (hint: he's a self-proclaimed "woolly mammoth guy"). Two of them were trades for seventh round picks, picks that drafted Braun and Demers. The last one was the trade for T.J. Galiardi.

During the playoffs, I also created roster charts for the Western Conference finalists and the Eastern Conference finalists. Of those four, the roster chart that is most like the Sharks' is the one for the Los Angeles Kings, who I think did something but I can't quite remember. The Kings used 55 original picks and a total of 145 players, in contrast to the Sharks' 41 picks and 129 players. However, the Sharks somehow have managed to out-trade the Kings, wracking up 52 trades in comparison to the relatively paltry 42.

The conclusions I draw from this? Sharks have always been all about asset value retention, they aren't afraid of pulling off a blockbuster trade, and they like to draft their own players.

As always, huge thanks to Pro Sports Transactions, which is an invaluable resource in the research and creation of this chart.