Share All sharing options for: Mythbusting: Does Niemi really perform better when he plays more frequently?

I think we've proven that point again. In the phase we had that real long travel trip and had the three back-to-backs, and he didn't play as often, it was probably his weakest point during the season. When this guy plays a lot, he plays better. We could play him 82 games and he'd probably be fine.

That's head coach Todd McLellan with one iteration of a mantra he and other members of the Sharks organization have repeated a fair amount over the past two seasons: that goaltender Antti Niemi gets into a rhythm and plays better when given a heavier workload. The longer a string of consecutive starts he receives, the better Niemi's performance. But just how true is that?

The concept of goalies getting into a rhythm has been looked at before by the hockey community. Gabriel Desjardins has shown that the oft-repeated announcer truism that, within a single game, goalies pelted with rubber more often do better than goalies who spend long periods of time contemplating the wonders of the universe is false. Gabe has also looked at the amount of randomness driving coaches' decisions to stick with the hot hand. Just as the great SnarkSD showed that Patrick Marleau and Joe Pavelski haven't been any streakier over their careers than robots with their goal-scoring rates would have been, the prolific Eric T. demonstrated the same was true for the performance of Marc-Andre Fleury, Ilya Bryzgalov, Henrik Lundqvist, Pekka Rinne and a few other goalies relative to robot counterparts who had the same probability of stopping each shot they faced, where that probability was each goalie's individual career SV%. Eric has also answered a similar question to that posed by this very article more directly, looking at Bryzgalov's performance in consecutive starts in an attempt to suss out any trends.

I used his methodology from that post to divide Niemi's career starts, since the beginning of the 2009-10 season during which he won the starting job in Chicago, into bins depending on the number of previous games played by Niemi's team in which he'd also started. From that, I was able to tabulate Niemi's SV% over all of his first starts after not playing, all of his second consecutive starts after starting his team's prior contest, all of his third consecutive starts and so on. Here are the results: 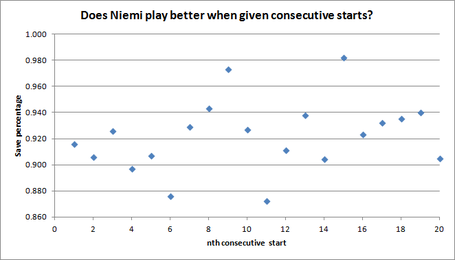 Right away, the contention that Niemi plays poorly in his first appearance after a layoff doesn't really pass muster. 45 times in Niemi's career he's started a game after one in which he didn't play and over that sample has posted a .916 SV%, identical to his career SV% as a whole. But it gets substantially worse immediately after that for the Sharks netminder. In the 63 games Niemi has started from games 2 through 6 of a consecutive starts streak, he's posted just a .902 SV%.

If there's an effect here, it occurs from games 7 through 10 of a consecutive starts streak where Niemi's posted an impressive .943 SV% albeit over just 16 starts, making it difficult to say with much confidence whether that's the result of Niemi legitimately getting into a rhythm or just simple variance. What we can do is compare Niemi's profile to that of the other goalies Eric surveyed using this method in his aforementioned article.

When observing the combined performance of Lundqvist, Rinne and Bryzgalov, Eric noted that their combined save percentage trended downward over their first eight consecutive starts, similar to what's occurred with Niemi over his first six, although the effect is more pronounced as a result of the limited sample size we have to work with for Niemi compared to most of those other guys. After that, things got largely random, suggesting the same could be the case with Niemi in the long run despite what looks like a substantial upward trend over consecutive starts 7 through 10. Additionally, Niemi has come crashing back down to earth in consecutive starts 11 through 13 with a .906 SV% in that sample. It seems like a pretty big stretch to believe Niemi activates his supergoalie powers following his 6th consecutive start only to have them malfunction before his 11th. As an aside, it's probably also important to note that although I included data points through 20 consecutive starts, Niemi has only had two streaks in his career of 14 or more consecutive starts so I really wouldn't read much into anything past 13 on that graph.

While I wouldn't say the myth that Niemi gets into a groove when started repeatedly is completely busted, it certainly isn't confirmed and, looking at data for the goaltending population as a whole, I wouldn't even call it all that plausible going forward. It's possible that the 16 games between 7th and 10th consecutive starts during Niemi's career or Niemi's impressive run at the end of the 2010-11 season when he started pretty much every game down the stretch for San Jose could be skewing McLellan's memory but there really isn't much in the way of compelling evidence based on Niemi's track record that he plays better when he plays a lot. If anything, over the span we have a good amount of data for, Niemi appears to decline with use during the first six straight games he starts. With a capable backup under contract in Thomas Greiss, it would probably benefit the team if the coaching staff stopped operating under the assumption that the opposite is true and eased Niemi's workload a bit next season.