We use a lot of so-called "advanced" statistics in player and team evaluation here at Fear The Fin and I've received a couple of requests this summer to explain in detail what some of these stats mean. I actually prefer not to call them "advanced" since that seems to imply there's something complex about them when there really isn't, and hopefully I'll be able to prove that through this series. When used properly and in the right context, non-traditional metrics can be a great tool for breaking down what's happening on the ice and making more accurate predictions than traditional stats like +/- and points at the individual player level or wins and goal differential at the team level will allow. Follow me over the jump for the first installment in this series, a look at PDO.

Why is it called that?

PDO is surprisingly not an acronym. It's named after a commenter on the late, great hockey blog Irreverent Oiler Fans who first noted that the Oilers organization had a habit of dumping players with low on-ice PDO ratings while signing those with high PDOs to long-term contract extensions. The blog's main writer Vic Ferrari was the first to track the stat.

What does it tell us at the team level?

Ironically, the reason PDO is useful is because it has very little predictive value, particularly at the team level. What that means is a team's PDO over a randomly selected half of their schedule isn't necessarily going to give you a good indication of their PDO over the remaining half. Hockey stats guru Gabriel Desjardins, who has called PDO the single-most useful statistic in hockey, showed as much with a chart in this post demonstrating the extent to which we can expect a team's PDO to regress to the mean (the mean being, as we established in the previous paragraph, 1000) after a certain number of shots: 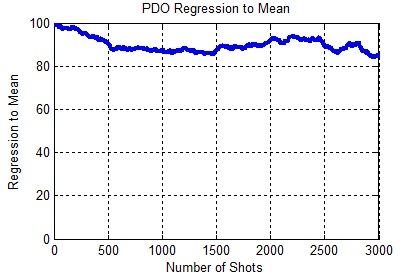 Even a team that manages a massive 1040 PDO over a 1500-shot sample should expect to see that total regress to the mean by about 90% over the rest of their schedule, meaning they'd most likely post a 1004 PDO over their next 1500 shots. Similarly, a team with a ridiculously low 960 PDO through 1500 shots would likely be a 996 PDO team over the remainder of their season. These are extreme examples to be sure, as teams rarely post PDOs that high or low over any significant portion of the year, but they help to illustrate that regardless of how confident you are in a team's ability to sustain a PDO substantially higher or lower than 1000, it's usually a bad idea to bet on it. With the level of cap-induced parity in the NHL, the spread in shooting and saving talent between teams is small and vastly overstated by what we observe in the short run. Some teams with legitimately great (Boston, Vancouver) or legitimately awful (Columbus, Toronto) goaltending can be expected to sustain slightly above- or below-average PDOs but the majority of teams, as seen above, regress sharply to the mean.

Of course, this isn't purely theoretical; we see PDO regression drive results in the NHL all the time. The most recent, and infamous, example is the 2011-12 Minnesota Wild. On December 11th of last year, the Wild were in 1st place in the entire league, four points clear of Philadelphia and five points clear of Chicago in the West. They were also being outshot during 5v5 play at a higher rate than any team in the league. The key was their 1021 PDO, specifically the .944 5v5 save percentage Niklas Backstrom, Josh Harding and Matt Hackett had combined to post. Some predicted that Minnesota wasn't likely to sustain their success unless they were capable of making systemic changes that would allow them to spend less time chasing the puck in their defensive zone. Dissenters claimed head coach Mike Yeo had implemented a system that allowed a lot of shots, but shots from bad angles and of generally low quality. Also you can't underestimate the value of adding a fuckin' All-Star to your team. We all know what happened next, as the Wild bottomed out completely in going from a team that was on a 118-point pace over their first 30 games to a 60-point pace over their final 52. They continued to be the worst outshooting team in the league; what changed was that their PDO went from 1021 over those first 30 contests to 972 over the remainder of their schedule. Granted, this isn't a typical regression--if I flip a coin 100 times and it comes up heads 48 times, that doesn't mean I'm likely to come up heads 52 times over the next 100 flips to average the sample out to 50/50--but even a dropoff to a league-average PDO would have sunk Minnesota and at the very least made them a playoff bubble team given their underlying play.

Other recent examples include last year's St. Louis Blues, who were an elite outshooting team for much of 2010-11 and continued to be through the first 13 games of their 11-12 schedule but a horrendous PDO had them at below .500 and led to head coach Davis Payne being canned. Some, including Kent Wilson and yours truly, believed Payne's successor Ken Hitchcock was walking into a terrific situation where he'd likely merit coach of the year consideration for doing little more than watching the percentages bounce back. That isn't to say Hitchcock isn't a terrific coach, the fact that St. Louis went from having one of the best possession rates to the very best is probably proof of that, but history shows that the impact his system has on his team's SV% is overstated. On December 26th, 2010, in the midst of the 10-11 season, the Dallas Stars were 2nd in the Western Conference on a 108-point pace while the New Jersey Devils sat 15th in the East at a 48-point pace. Over the rest of the season, the Stars played at an 85-point pace and missed the playoffs while the Devils played at a 104-point pace and nearly made a miraculous playoff run. The reason? PDO. Why did the 2009-10 Colorado Avalanche start the season with an improbable stint atop the conference before going on a free-fall, finishing 8th, being throttled by the Sharks in the first round and then not just missing the playoffs altogether the following year but drafting 2nd overall? Again, the wheels fell off their PDO bus.

None of this is to suggest that team PDO is entirely luck, as is sometimes stated. Strategic adjustments, player health and specific offensive plays most likely have an indeterminable, but real, role in the PDO fluctuation we can observe. The main takeaway is that, with the NHL being such a competitive and high-parity league, coaches easily and continuously counter systemic adjustments made by their peers, virtually every team suffers key injuries in a given season and the amount of tape available to analyze players' tendencies render them moot pretty quickly. For whatever combination of reasons, high or low team PDOs are rarely sustainable in the long run, something that helps immensely in both making predictions and tempering expectations. Even the mighty Bruins, whose goaltending talent has helped them sustain an above-average PDO over the past few seasons, are not immune, unless you think their post-All-Star break collapse was due to Tim Thomas standing up President Obama.

What does it tell us at the player level?

It's a similar idea to applying PDO to team analysis. When referring to a specific player's PDO or "on-ice" PDO, we're talking about his team's shooting percentage added to his team's save percentage when he's on the ice in 5v5 situations. I think most people accept at this point that +/- is a poor way to evaluate a player. There are a lot of reasons for that, but one of the main ones is that a high or low PDO can lead to vastly inflating or devaluing a player's +/- despite being largely out of his control. Even the best defensemen in the league exhibit very little repeatable skill in influencing their goalies' save percentages. Some forwards do contribute to sustaining a high 5v5 shooting percentage for their team when on the ice, a portion of it due to the fact that they themselves shoot for a high percentage or that they set up their linemates for opportunities that allow those players to finish at an above-average rate but a lot of it is also because their linemates have great shooting talent. In the long run, over 90% of NHLers fall between 7 and 8.5% on-ice shooting 5v5 which generally results in their on-ice PDO regressing very sharply to 1000 as Cam Charron demonstrated in this chart from an early-season piece on Marco Sturm's PDO woes (the x-axis is 5v5 minutes played while the y-axis is PDO): 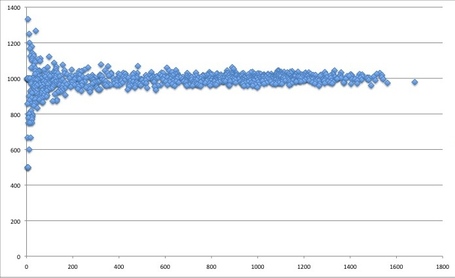 Remember that time Jeff Schultz led the league with a plus-bajillion rating? High PDO. Remember when Ville Leino scored a bunch of points and the Sabres decided to back a dump truck full of money into his driveway? High PDO. Remember when Kris Versteeg was among the league scoring leaders this past season? High PDO, specifically a high on-ice shooting percentage. Unless you're trying to analyze a handful of superstars, who are really only relevant for fantasy hockey purposes anyway since none of them are going to become available anytime soon in real life, it's a smart move to bank on a player with a very high or very low PDO not being able to sustain that level of performance going forward.

Why should Sharks fans care?

Think back to January 13th, 2011. The Sharks had just lost 5-2 to the Edmonton Oilers, their sixth consecutive defeat, and were 11th in the Western Conference on an 88-point pace after winning three straight Pacific Division titles and two straight conference crowns in prior seasons. The narrative generators were out in full force, citing explanations as varied and ridiculous as the Sharks experiencing a post-Olympic hangover, you know, almost a full year after the Vancouver Olympics and the team just not giving a crap about the regular season anymore after having coasted their way through it the past few years before coming up short in the playoffs. The reality was that the Sharks were still outshooting their opponents and controlling play at a commendable rate; their Corsi% (a stat we'll get into later in this series that serves as a good proxy for puck possession and scoring chances) was 53.5%. The real issue was below-average goaltending from their Finnish tandem between the pipes and some horrible shooting luck. At 5v5, the Sharks had received a .915 SV% and scored on just 6.8% of the shots they took over those 45 games. So it isn't particularly shocking to learn what happened next; the team's underlying numbers were essentially unchanged as they only improved to a 53.6% Corsi team over the final 37 games of their schedule but they went on a 125-point pace tear that had them finish atop the division and 2nd in the West solely because their PDO bounced back in a huge way. This is also why we at Fear The Fin have been relatively muted in criticism of the team's second half in 11-12 and their limited player movement this summer. They mostly just ran into abysmal percentages that are a good bet to normalize next season.

Where can I find this stat?

Behindthenet.ca has a player breakdown page that lists the PDO rating of every player and is updated daily during the regular season. You can toggle the list by season, team, position, game state, minimum games played and more. Behind the Net also tracks PDO at the team level. Here's that page for the Sharks last season where you can see the second-half collapse illustrated in graph form. You can use the drop-down menus to change team or season. Finally, timeonice.com has a series of scripts you can use to find player and team PDOs for specific ranges of games. Red Line Station has a terrific how-to on using timeonice here.

Where can I read more about it?