Share All sharing options for: What Went Wrong? An Autopsy of the 2011-2012 Losing Streak

On February 13, 2012, coming off of a 5-3 regulation win against Washington, the Sharks had a 99.31% chance of making the playoffs given the remaining number of games on the schedule [1]. Over the course of about 5 weeks culminating in a 2-5 loss to LA on March 20, 2012, San Jose dropped 61.93 percentage points to a nadir of 37.38% chance of making the playoffs. 12 of the 19 games in that streak were on the road, including a 9 game road trip (save the first 2 wins of that trip) from hell. The Sharks accrued an abysmal 14 out of a possible 38 points (0.736 points/game, as a reference CLB went 0.793 for the year). It was as bad as it sounds. S.J was easily the worst team in hockey over that span. The disastrous streak put S.J on the brink of missing the playoffs for the first time since 2002-2003, and well clear of earning home ice for round 1 of the playoffs.

The Streak From Hell

So what happened? How could a team that for a majority of the year looked to have the inside track on another Pacific division crown, and possibly fighting for the Western conference title, all of a sudden become worse than the worse team in the league? What transpired over the course of those 5 weeks was entirely unpredictable, but not impossible. After the jump we'll take a long adventure around what I believe to be the key variables that caused the disastrous meltdown. We'll look at the impact shooting and save percentage, possession numbers, even vs. power play strength, have a long discussion about streaks, and the fickle nature of randomness.

Before we focus on the Sharks, I think we should first discuss streaks in general. I talked about it in regards to Marleau's play earlier this summer, and I think the concepts also apply to the team level. In general, most statisticians believe "streakiness" or the "hot hand" is the consequence of normal variance, with absolutely no implication on future performance. In other words, shit happens, players and teams go on streaks, but there is nothing that suggests that players and teams will continue that streak. Good teams tend to have winning streaks because they have a higher chance of winning each game, and vice versa for bad teams. Looking back on the tables I constructed for Marleau and Pavelski earlier gives you a pretty good idea how variance can lead to some pretty lengthy streaks, all within the norms of expected variance.

Travel to the roulette table at your local casino and you'll see the past numbers listed somewhere on the board. Gamblers love to believe that streaks will either reverse if going for to long, or continue if one's going. The truth is that they are there to entice you to gamble, and there's no way that a streak influences the outcome of the next roll. The casino is just capitalizing on our humanistic desire to search for patterns.

With that in mind, let's climb into the DeLorean and travel back to February 16th, 2012. And begin our dissection of what lead to one of the worst runs in recent Sharks history.

On-Ice Shooting and Save Percentage

The first variable that should come to your mind is PDO. We talked about it a lot while the streak was happening, and after going back and performing a thorough autopsy, it still seems to me that PDO played to biggest part. a brief word about PDO itself.

A great refresher can be found here, published by our own Neutral. The most interesting thing about PDO to me, and what you should keep in mind about it is simply this; the correlation between PDO for a game, and the amount of points earned is 0.8.(!) The auto-correlation between 2 random samples of games within a season is around 0.10.(!) Translated this means that game outcomes (ie. wins) are highly dependent on PDO, but PDO is very random, like flipping a coin, and eventually settles to about the same number for (almost) every team over a season.

Let's first take a look at SJ's PDO over the course of the season. 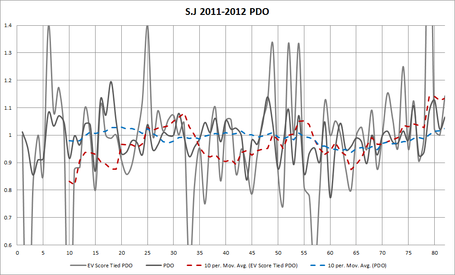 For the year SJ was a 0.991 PDO team. Over the course of the losing streak (which runs through games 55-73) the overall PDO for SJ was 0.955. If you remove those games, S.J's PDO would be 1.001 in all other games, exactly as expected. This affirms that SJ had (as expected) league average Sh% and Sv%, and overall neither benefited nor suffered from luck in the games outside of the losing streak (or more appropriately, the luck balanced out over the course of those games). The graph above basically gets at this point. You can see in the 10 game moving average of PDO (blue dashed) that there is a dip around game 55 that doesn't return to around 1 (ie. average) until game 80.

So how big an effect was the depressed PDO? We can't know exactly the effect, but we can calculate the goals for and against for S.J had they been a league average PDO team, instead of terrible. league wide Sh% was 0.0895 last year, so let's assume that they had a 0.0895 Sh%, and a 0.911 Sv%. The goal diff over the losing streak was an abysmal -18. If we adjust their PDO numbers as indicated above, the goal diff changes to around a whopping +9. Damn, that's alot. S.J becomes roughly a 1.174 pts/game team. Instead, S.J suffered the worst PDO in recent memory, and dropping to a 0.684 pts/game pace. That's like saying the Sharks would have earned an additional 9 points, ending the year with 105 points. Score effects no doubt played a role in the increased shot%, but an effect that large couldn't account for the drastic change in goal diff we're seeing.

Looking deeper into the PDO story brings out much of the issue we saw over the losing streak. It's hard to say the Sharks suffered a worse fate in any of the game states, as they're all generally poor, but it's clear that while the Sharks were leading (+1,+2 above) their PDO plummeted to beyond terrible. From a PDO perspective, the Sharks had terrible luck while leading, and lost many games over the streak due to an inability to hold a lead. From the first table, it's clear that the major culprit was a really low shooting percentage.

If we look at the last table, we can see the time the Sharks spent in each game state. While the Sharks were completely inept at converting 1 goal leads into 2 goal leads, it wasn't for the lack of time. The Sharks spent more time per game in the 1 goal lead state than outside of the streak (in full disclosure; a majority of that time stems from the games against DET [47min] and EDM [40.72]). This isn't something the Sharks could have controlled of course, as timing of goals is highly variable, and another aspect of the game highly influenced by variance.

As I mentioned above, the shot rates are likely obscured by score effects, as all teams tend to out shoot their opponents when ahead. But we can break those shot rates down as above to look at how the sharks performed in each situation. The table presented below is the Fenwick% (proportion of goals, shots, and missed shots) broken down by leading/trailing game state.

Obviously the thing that jumps out here is how outstanding the sharks were last year when ahead. Over the entire year the sharks posted a huge 0.520, and 0.527 leading by 1, and 2 respectively[2]. Their performance when trailing might have been a bit underwhelming, but not terrible. They dropped off that pace quite a bit during the streak, but they were still way ahead in terms of league average, and in addition to that, they spent a majority of those games on the road, which causes fenwick% when leading to drop further (0.437, 0.418 for 1, 2 league average respectively). I included in the last row, which illustrates how a league average team would perform given the home/road schedule the Sharks faced during the streak (ie. 6 home, 13 road games).

Clearly there is nothing in this data above to suggest that the even strength on-ice performance of the sharks during the streak had much to do with the drop. They could have performed better when down 2, but the 3% drop was more than made up in their tied, up 1 and up 2 performance, collectively about a 12% above league wide average.

When it comes to special teams, we always want to look at shooting rates per 60 to get a good look at performance. For many years the NHL has published PP% data, but this has some obvious flaws. The most important of which is that it doesn't take into account time spent with a man advantage, and is subject to much of what makes PDO regress heavily toward the mean.

Because we're talking about a small amount of time spent on the PP and PK, 85.9 min and 74.9 min respectively the numbers have some idiosyncrasy. It seems the Sharks PP sputtered a bit on the streak, posting a 54.5 SF/60, a 15% drop from their non-streak numbers, but maintained 7.7 GF/60 thanks to a 14% shooting percentage. As a mirror image, the Sharks held their competition to an amazing 46.5 SA/60 on the PK while on the streak, but suffered a terrible 0.810 Sv% resulting in 8.8 GA/60. This represented 11 out of 58, 19%, of goals against in total. As a comparison the non-streak Sharks had 22% of their GA come off of the PK. I still believe that their was a system's error in the penalty kill that bucks the usual trend in NHL stats; that although the PK gave up less shots, the shots they did give up were much closer, resulting in a lower Sv%. But it's really just a working hypothesis at this point.

This table is compiled more or less for completeness, but again, nothing here really stands out to me. The team collectively took a huge EV shooting percentage dump, which resulted in a massive reduction in EV goals/game. Wingels posted an amazing 0.633 Fenwick% in 14 games, with Desjardins turning in the worst trip of any player playing more than 15 games.

After conducting a thorough review of all aspects of play during the infamous 2011-2012 losing streak, I've come to the conclusion that the Sharks collectively hit a major run of poor PDO, in which many if not all players suffered a shooting percentage drop that lead to a massive reduction in even-strength goals. This was coupled with a below average Sv%, and a terrible PK Sv%. As a consequence the Sharks suffered a huge drop in the standings, and playoff probability, almost forcing S.J out of the playoff picture. There was no evidence to show that team performance was significantly different from their performance over the course of the entire season.

[1] This is according to Sportsclubstats, which essentially assumes that any team can win any given game for the rest of the season. This method probably isn't the most predictive, but given the games remaiing on the schedule for the sharks at the time, it probably isn't that far off. In addition, the numbers put out by sportsclubstats aren't that differenent than the ones I had calculated myself, using the best predictors of future success. Which really goes to show you how crazy random the game of hockey can be.

[2] I realize that these numbers look different than the ones posted here by behindthenet. I don't have a great explanation for that. I went back and re-checked everything because at first it did appear as there is an error in the data, but my data matched the NHL PBP and TOI.com data. I re-calculated league averages, which appear pretty close to the numbers presented on behindthenet.

[4] TOI is ripped from NHL PBP data, which is obviously not the most accurate, these should be taken as good estimates, and not necessarily fact.