The strongest feature of the Sharks' roster in 2013 will be their dominant top line.

Few teams in the NHL can boast top lines that are as powerful in all areas of the ice as the Sharks' top trio. Which is fortune because Patrick Marleau, Joe Thornton and Joe Pavelski will have to shoulder the bulk of the responsibility in carrying San Jose to the 2013 Stanley Cup Playoffs.

He's scapegoated, he's disliked and he's scored more goals since 2008 than all but three players in the entire NHL. To say Patrick Marleau is one of the most divisive players in Sharks history is an understatement. Those on either side of the Marleau "debate" have a less amicable relationship than Sunnis and Shiites. Thanks to some incredibly nebulous definition of leadership, heart, grit and all those other wonderful hockey words that mean nothing yet justify everything, Marleau has consistently been blamed for every single thing that has gone wrong with the Sharks over the past half-dozen seasons.

Yet despite his reputation as a playoff underachiever, only Daniel Briere, Henrik Zetterberg, Johan Franzen and Sidney Crosby scored more postseason goals than Marleau between Gary Bettman's second and third lockouts. Despite being constantly labeled as "streaky," there is no evidence Marleau is a more inconsistent scorer than any other player in the NHL. Despite being derided by Jeremy Roenick and "analysts" of his ilk as a player who doesn't try hard and never backchecks, Marleau is consistently trusted by Todd McLellan to play some of the toughest minutes available to Sharks' forwards and excels at driving play in those situations. Despite the constant cries of "overpaid!", no player who carries a lesser cap hit than Marleau has scored more goals than he has since 2008 save for 15-year Devil Ilya Kovalchuk and Marleau provides a ton of additional value to the Sharks beyond his offense in all three game states and all three zones.

As you can see, none of the most commonly voiced criticism of Marleau really stands up to even the slightest scrutiny. Over the past four seasons, Marleau has been an elite offensive talent, a player who has helped the Sharks dominate at even-strength against highly skilled competition and one of San Jose's most useful weapons on special teams. Even with my unabashedly pro-Marleau viewpoint, however, I'm more than a little concerned about whether he can continue to be an offensive leader for the Sharks. Here's a look at Marleau's shot rate, shooting percentage and goal rate over the past four seasons, divided into even-strength and power play numbers:

The red flag here is that Marleau's 5v5 shot rate has declined in each of the past two seasons and, based on historical league-wide data, that's a trend likely to continue. In general, forwards maintain relatively constant shot rates at even-strength throughout their career before a downturn begins at age 31, which is how old Marleau was two seasons ago. Assuming he loses another 8% of his shot rate in 2013, Marleau is probably most likely to score around 10 5v5 goals in a 48-game season. Adding that to a power play scoring rate that should remain relatively unchanged pegs him at about 16 goals this year, which is still an impressive 27-goal pace over an 82-game season but is a definite dip from what he's produced over the past couple of years. If you're looking for legitimate signs of decline, I'd be more willing to cite his steady drop in getting shots on goal rather than Marleau's poor performance in an insignificant five-game sample size last postseason.

Regardless of his offensive output, which should remain substantial, it's the value Marleau adds with his speed in transition, creativity on zone entries and ability to help his line nullify opposing scoring threats that will be of immense help to the Sharks in 2013. Simply put, Marleau will continue to be one of the best two-way wingers in hockey, whether his detractors care to admit it or not.

Despite being named league MVP in 2006, it's possible Joe Thornton was never more valuable to the Sharks than he was in 2011-12. The evolution of Jumbo from a one-dimensional scorer under Ron Wilson to a dominant shutdown center during the McLellan era is one we've documented before. Since 2007, no forward in any season has posted a better Relative Corsi rate than Thornton did last year while facing the same caliber of competition. In other words, no one in the last five years has produced better even-strength results than Thornton while playing minutes as tough as he did in 11-12. Jumbo has gone from resembling Henrik Sedin to playing (and being used) like Pavel Datsyuk. Both are unquestionably immense talents but it's clear which player has a greater impact on their team's success at both ends of the ice.

The ripple effect throughout the lineup caused by Thornton and Pavelski being so effective against top-shelf competition can't be understated either. With Jumbo and Pavs dominating the toughs territorially, easier situations open up further down the lineup to be exploited. Again, this is why it's disappointing that the Sharks have been unable to take advantage of that by signing or acquiring talented, if one-dimensional, scoring forwards for their third line. Regardless, all indications from thus far in training camp point to the trio of Thornton, Pavelski and Marleau being reunited, at the very least to start the season, with their collective deployment likely to mirror that of a year ago. They'll play a lot of minutes at even-strength, they'll play extremely difficult minutes at even-strength and they'll likely perform very well in those minutes.

As for Thornton individually, despite his continued aging (that's right, he's now older than he was last season, the choker), I wouldn't be surprised to see him put up some better boxcar stats, pro-rated to a 48-game season, than he did last year. The Sharks were much worse at finishing their chances with Jumbo on the ice 5v5 in 2011-12 than they ever have been in the past. If his on-ice shooting percentage in that game state rebounds to even 9.5% and his teammates click on the power play similar to the rate they did prior to 2011, Thornton likely scores at a higher points-per-game clip than he did a year ago. Even with those conservative estimates, it's not difficult to project 48 points in 48 games for the Sharks' No. 1 center to go along with the myriad other skills he brings to the table.

It's something of a hockey cliché to label a player as one who "makes those around him better." But I can't think of anyone that description legitimately applies to more than Joe Pavelski. To demonstrate that, here's a chart displaying Pavelski's Corsi% when he shared the ice with each of the nine players he most frequently skated with at even-strength between 2009 and 2012, compared to how they did without him (click to embiggen): 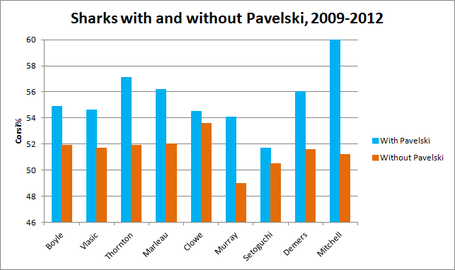 Every single player to spend substantial time with Pavelski over the past three seasons has been better (in most cases, far better) at driving possession and outshooting the opposition with him than without him. This is particularly impressive because Pavelski has played some tough, tough minutes during that span--starting nearly 53% of his pertinent 5v5 shifts in the defensive zone and lining up against elite opposing players. That means most of these guys had relatively easy situations to exploit in their time away from Pavelski. And yet they still turned out worse results without #8 to force turnovers with his positioning, win the neutral zone and dominate puck battles for them. Pavelski's value to the Sharks just can't be overstated.

In fact, besides media coverage, there's very little that separates Pavelski from elite two-way studs like Patrice Bergeron, Ryan Kesler and David Backes. At just a $4 million cap hit on a contract that lasts through 2014, Pavelski was the Sharks' MVP last season in my mind. On so many nights, he was the glue that held an incredibly effective top line (and, by extension, the team as a whole) together. As impressive as Thornton's 2011-12 season was, I'm comfortable saying there's no way it would have been possible if he hadn't spent 84% of his even-strength ice time skating with Pavelski.

In addition to his two-way brilliance, Pavelski was also a really productive offensive player for the Sharks last year, especially at even-strength. His 5v5 goals per 60 minutes rate ranked ahead of noted snipers like Kovalchuk, Daniel Sedin, Corey Perry and John Tavares. He's such a prolific scoring chance generator that I can't see Pavelski's production declining next season, especially since he's a lock to remain on Thornton's wing as well as on the power play's first unit.