Should the Sharks sign Scott Gomez? No, seriously. Stop laughing.

With Montreal likely set to buy out Scott Gomez in the coming days, should the Sharks take a flier on a potential third-line center?

It has taken less than 72 hours for the league to make an amendment to the collective bargaining agreement it canceled half a season to negotiate. But after the Montreal Canadiens and New York Rangers reportedly informed Scott Gomez and Wade Redden, respectively, to go home and break out the sweatpants and Ben & Jerry's for the remainder of the year rather than report to training camp, the players' association intervened and things have only escalated from there.

Montreal and New York wanted to ensure their overpaid albatross wouldn't suffer an injury during the season and thereby be ineligible for an amnesty buyout this summer. The NHL and PA stepped in to allow clubs an "accelerated compliance buyout" prior to the start of the regular season this Saturday. Teams are permitted to use an amnesty buyout right now, but the cap hit of the bought out player would count against them until the beginning of the 2013-14 season.

The upshot of all this is that Gomez and Redden are likely to end up on the unrestricted free agent market as soon as tomorrow after their clubs utilize the CBA's newest provision. Redden is largely an unknown quantity at this point, having been stashed in the AHL two years ago. It's Gomez who intrigues me and probably should intrigue Doug Wilson and the Sharks' front office as well.

Unless you haven't followed the NHL all that closely over the past few seasons, you're probably aware of the public perception of Gomez's tenure in Montreal. After signing a 7-year, $51.5 million deal with the Rangers (hey, they sign a lot of bad contracts!) that Gomez was never going to live up to, he shockingly didn't live up to it and was promptly traded two years in. After a successful debut season with the Habs in which the team advanced to the Eastern Conference Final, Gomez has largely been the subject of ridicule in the two years since, scoring just 9 goals in his last 118 games, including a year-long goal drought that spawned this website.

But as fun as it is to ridicule Gomez's offensive ineptitude and as evident as it was that his deal was an overpay of epic proportions, the real value Gomez added to the team was almost entirely overlooked. Here's an excerpt from a piece Cam Charron wrote last year:

Gomez, ruined in perception by his contract, is probably hockey's most underrated player, seen as so useless and overvalued that nobody recognizes his true talents, or his importance to the Montreal Canadiens.

I'm inclined to agree with Cam's analysis and think Gomez maybe represents the Sharks' best chance at icing a competent third line rather than the disaster they're currently slated to open the season with. The frequently voiced complaints about Gomez's lack of goal-scoring were puzzling because Gomez has just never been a goal scorer. Sure he potted 33 in the power play-infested Bizarro hockey of the 2005-06 season but, throwing that year out, he's averaged 13.6 goals per 82 games over his NHL career. Hardly Brett Hull numbers. So while it was certainly improbable that he went an entire calendar year without finding twine (although he did spend a good portion of that on IR), it wasn't all that out of character.

How Gomez can really help an NHL team, even today, is with his playmaking and possession ability. He's a cerebral player who can stay a few steps ahead of opposing defenses in order to exploit holes in coverage and set up teammates for scoring chances. Last season, in what was widely regarded as an unmitigated disaster of a campaign for Gomez, he finished 31st among NHL players in 5v5 primary assists per 60 minutes. That was higher than the likes of Anze Kopitar, Eric Staal, Joe Thornton and Marian Hossa. He had a terrible season by that measure in 2010-11 but ranked 23rd in first assists per 60 in 09-10 and 14th in 08-09. As Eric T. of Broad Street Hockey has shown, a player's primary assist rate is the best way to quantitatively judge his playmaking ability since secondary assists tend to be largely random. The dude can pass the puck.

And then there's Gomez's surprisingly significant impact on generating offensive zone time, illustrated in this great graphic from Habs Eyes On The Prize last year that demonstrated how important possession is to teams hoping for playoff success and how important Gomez was to the Habs' possession ability: 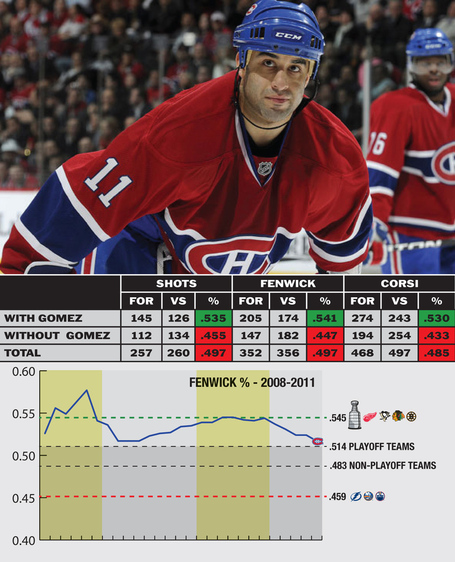 It's imperative to note that Gomez was heavily sheltered last season to the tune of starting 63.8% of his non-neutral 5v5 shifts in the offensive zone so his raw possession stats are certainly on the misleading end of the ledger. As far as the Sharks are concerned, however, that shouldn't matter; they can feed him the same easy minutes Montreal did, likely on a line with T.J. Galiardi and Tommy Wingels. When the choice is between a player in Michal Handzus who has demonstrated the ability to get creamed in soft situations and one in Gomez who excels at both driving play and setting up teammates for goals in those minutes, it's obvious who you should take.

Gomez isn't a player you can trust in tough defensive situations, he isn't a goal-scorer and he certainly never was and never will be worth anything approaching $7 million a year. He is a player who can help create offense in protected minutes and mitigate defensive liability by keeping the play in the opposition's end. Assuming the Canadiens buy him out in the next few days, it's unlikely the deal he signs will carry a cap hit of much more than $1.5 million, if that. The Sharks should jump at the chance to add him to the roster for that price as there's literally no risk in doing so. If he's awful (and I'd be shocked if he's any worse than Handzus), he'll only be on the team for 48 games maximum. If things work out, the Sharks will have largely filled their hole at third-line pivot with a player who can also center the second unit power play, a role currently occupied by either Handzus or Wingels. With the likes of Bracken Kearns and Frazer McLaren playing left wing on the fourth line in camp, we know Gomez won't be taking minutes from a promising young forward. Unless a Gomez bidding war inexplicably erupts, I can't think of a good reason for San Jose not to sign him.