Here are the five games you should probably be watching today as the NHL returns after a seven-month leave of absence.

Two hundred and twenty-one days. That's how long it's been since NHL hockey was last played. The sanctimonious crusaders for rec league, minor league and college hockey throughout social media have a point; the league's sweeping declaration that "hockey is back," as if the NHL is the sole arbiter of the sport, has been arrogant in the extreme. But the unfortunate reality is that the league has monopolized hockey at its highest level. Sure, they can't strip us of the comforting sound of a crisp tape-to-tape pass being completed or the thrill of lacing up skates for a game of shinny. But as the last four months have conclusively shown, they are capable of denying us the sight of Patrick Marleau streaking in on a breakaway or Marc-Edouard Vlasic expertly breaking up a 2-on-1.

The protracted and frivolous lockout is finally over and the puck drops on the 2013 NHL season today. The most exciting brand of hockey will be on our television screens and in our arenas once again. But as much as this is a day for jubilation, maybe it should also be a time of sobering reflection. A fall and early winter devoid of NHL hockey have proven beyond a shadow of a doubt that the league is owned and operated by individuals more interested in lining their pockets than preserving the best interests of the sport. If you possess the self-control to stay away from the league in order to protest that fact in an ultimately meaningless but symbolically poignant way, that's commendable. I, for one, don't and as much as I feel like I should have reservations about immediately embracing NHL hockey again, I'm just too damn excited for this season to start. Here are five opening day games that should whet your hockey appetite ahead of the Sharks' opener in Calgary tomorrow:

Two teams that had the good sense to wait until well after Jeremy Roenick left them to win a Stanley Cup face off in this season-opening tilt that should be equal parts entertaining and difficult to watch. Entertaining because it features two of the best teams in the league and some of the greatest hockey players on the planet in Jonathan Toews, Drew Doughty, Marian Hossa and Jonathan Quick. Painful because the Kings' banner-raising ceremony will be another reminder that the Sharks still haven't tasted championship glory. Also fuck Los Angeles.

After a playoff series that resembled a seven-car collision last spring, the Penguins and Flyers take the ice against each other once again with Sidney Crosby and Claude Giroux likely eager to renew hostilities. The goaltending in this game should be pretty hilarious unless Dan Bylsma opts to go with Tomas Vokoun in net, who should really be the Pens' starter in 2013.

Rick Nash makes his NYR debut as two preseason favorites of the East Coast hockey media that go to bed too early to know anything about real hockey clash in Beantown. Ryan McDonagh was terrific last season but I'm still not sold on the Rangers' defense and have a hard time even proclaiming them the best team in that division. Still, this should be a great game, even if it will inevitably end 2-1 courtesy two awesome goalies.

It's an old-school, Norris Division rivalry game as the Blues open their defense of the Central division title on home ice. Detroit, meanwhile, plays its first game of the post-Lidstrom era that will hopefully be full of misery and suffering. What's the over/under on the number of minutes into this game it takes for Carlo Colaiacovo to get injured?

These teams are both despicable and lack a second line so they should get along just fine on the Hockey Night in Canada nightcap. One of the NHL's top shutdown pairings in Dan Hamhuis and Kevin Bieksa doing battle with Ryan Getzlaf and Corey Perry is the matchup to watch for in this one. And if you're drinking along, take a shot every time CBC pans to Roberto Luongo on the bench while feverishly discussing Maple Leafs trade rumors. Finish your drink if it's during game action.

Feel free to discuss these games or the eight others scheduled to take place today in the comments. Also, if you're planning to overreact to opening day game results, this might come in handy: 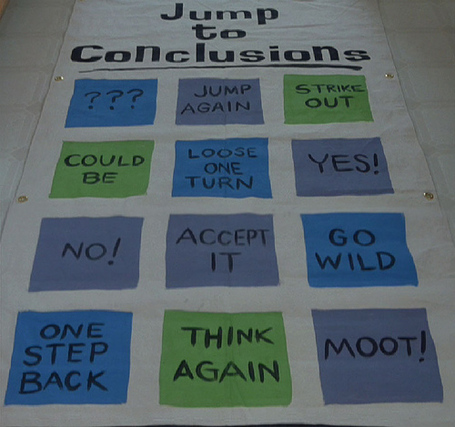