Sharks vs. Canucks: San Jose tries to make it 11 straight over Vancouver

The San Jose Sharks will try to win their eleventh-straight game against the Vancouver Canucks in their first road game of the season.

Share All sharing options for: Sharks vs. Canucks: San Jose tries to make it 11 straight over Vancouver

For one reason or another the NHL is requiring the San Jose Sharks to play the rest of the season despite the overwhelming evidence that the Sharks will not lose en route to the franchise's first Stanley Cup. No matter, as rookie sensation Tomas Hertl will surely do the heavy lifting for San Jose the rest of the season -- that shooting percentage over 40 percent is perfectly sustainable, I swear!

After San Jose handled the Canucks in the first game of the season, Vancouver went on a three-game win streak which they carry into tonight's contest. Wins over the Oilers, Flames and Devils (who were on a back-to-back) won't exactly be framed over the fireplace, but neither will the Sharks wins over the Canucks, Coyotes and Rangers (also on a back-to-back). In a lot of ways these teams are right back where they started; except the Sharks have beaten Vancouver 10 straight times. Ah, that.
The Canucks are a top-10 corsi-for team in 5v5 score close situations while the Sharks clearly sit atop the same category. Yay small sample sizes!
Speaking of small sample sizes, you've probably already noticed that Hertl leads the league in goals, Jason Demers leads the leagues in plus/minus and Joe Pavelski is second in the league in assists. Not a bad start to the season!
Speaking of Hertl -- to give you another idea of how big this kid is in the Czech Republic, here is a screenshot of a Czech newspaper's website. Not everyone gets their own header. Hertl also made the front page of this paper. 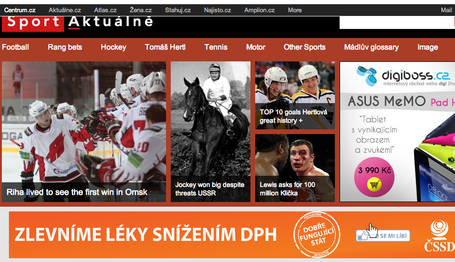 Thanks to an illegal hit in Tuesday's game, the Sharks will be without veteran defenseman Brad Stuart; you know, like they were the first two games of the season. Stuart will be out for three games to think about what he has done and presumably Scott Hannan will fill in on the third-defensive line pairing.
Matt Pelech has been recalled from Worcester which means John McCarthy has been sent back down. Pelech has only been with the Sharks for two games -- both of them against the Canucks. He is not a good hockey player, but he IS an above average face-puncher.
This is the Sharks' first road game of the season before team teal heads back to SAP Center for a couple of games against the Senators and Blues -- and what better way to start the road portion of the schedule than with a win over the Canucks?
Edit: Do yourself a favor and read Joe Thornton's quote on Tomas Hertl "showboating" in his four-goal night.