Now in his seventh year with the Sharks, the team's best defenseman keeps getting better and better.

Share All sharing options for: Marc-Edouard Vlasic making his case for Team Canada

Tomas Hertl has been grabbing the bulk of the headlines during the San Jose Sharks' 5-0 start to the 2013-14 regular season, and rightfully so. But if we're naming the team's best player so far in the "old enough to legally purchase alcohol" subcategory, it would be difficult to pick anyone other than defenseman Marc-Edouard Vlasic.

Consider this: when Vlasic has been on the ice at even-strength in score-close situations so far this season, the Sharks have controlled 77.2% of shot attempts (best in the league) and outscored their opponents 6-0. In all even-strength situations combined, San Jose has a 98-54 edge in shot attempts and a 6-1 edge on the scoreboard with Vlasic on the ice. That's despite the 26-year-old, now five games into the 5-year, $21.25 million contract extension he inked last summer, drawing the toughest forward matchups on the Sharks' blueline. Of course, all of that is in addition to his point-per-game production thus far that stands at just two fewer than the seven points he managed in 48 games last season. To say Vlasic has been crucial to the Sharks' early success would be an understatement.

This is the part where I emphasize how early it actually is, and it's certainly true that Vlasic's otherworldly numbers in seemingly every category should be expected to fall back down to earth at some point. But we know that even when he inhabits this planet, Vlasic's performance isn't all that far removed from what he's accomplished through a little under two weeks of this season.

Despite spending the entirety of the shortened 2013 season paired with either an over-the-hill Brad Stuart or an inexperienced (and likely injury-compromised) Justin Braun, this player usage chart from Hockey Abstract demonstrates that Vlasic's effectiveness in tough even-strength minutes was nearly unmatched around the league: 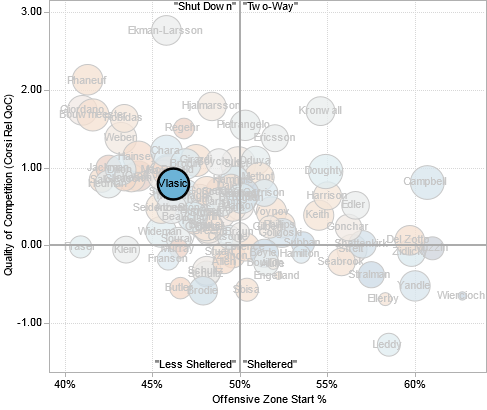 The x-axis represents the percentage of non-neutral shifts a player started in the offensive zone while the y-axis indicates the quality of competition he faced. The more red a player's bubble, the more heavily his team was outshot with him on the ice while the bluer a player's bubble, the greater his team's advantage in shot differential. Despite being firmly ensconced in the shut-down minutes quadrant of the chart, Vlasic blue himself like he was Tobias Funke. Among defensemen who appeared in at least 35 games last year, began more than 50% of their 5v5 shifts in the defensive zone and faced an above-average quality of competition, only Zdeno Chara, Kris Letang, Johnny Boychuk and Dan Hamhuis finished with higher on-ice shot differentials than Vlasic. That preceded a postseason in which Vlasic was instrumental in shutting down the Sedin twins in round one before neutralizing Anze Kopitar in round two. It also came on the heels of a 2011-12 season in which the only defensemen in the NHL to face both a higher quality of competition than Vlasic and finish with a higher on-ice shot differential were all-world veterans Nicklas Lidstrom and Kimmo Timonen.

So, yeah, he's been here before. Although an encouraging new wrinkle apparent in his game in the early stages of this season has been an impressive offensive touch. Vlasic has started seasons on a hot streak before, including when he posted 11 points in his first 18 games of the 2011-12 campaign before cooling off considerably the rest of the way. But it's always a welcomed change of pace when Vlasic's play with the puck matches his elite play without it. This pass on Hertl's first NHL goal (now six goals ago), for instance:

Sure, the Coyotes were caught on a bad line change but that tape-to-tape pass stretching from nearly blueline to blueline past an oncoming forechecker is something we've rarely witnessed from Vlasic in the past. I'm not suggesting he's Erik Karlsson now, and the offense will surely dry up at some point, but plays like that provide evidence of an offensive game that lies dormant within a player who scored 73 points in 66 QMJHL games as an 18-year-old.

Given Vlasic's dominant start to this season as well his performance over the past...well, really, over the entirety of his seven-year career, the discussion naturally shifts to whether he has a legitimate chance to represent Team Canada at the Winter Olympics in Sochi next February. Vlasic was one of seventeen defensemen invited to the Canadian orientation camp in late August so he's certainly on General Manager Steve Yzerman's radar. But with the likes of Shea Weber, Drew Doughty, Alex Pietrangelo, P.K. Subban, Kris Letang and Brent Seabrook carrying Canadian passports, can an understated own-zone killer like Vlasic really make the cut?

One thing working in his favor is that all of the aforementioned defensemen are right shots. While Yzerman is understandably coy about his national team-building philosophy, there have been indications he's hoping to slot blueliners into their natural sides as he did at the 2010 Olympics in Vancouver. Here's what he told NHL.com in the summer:

I do like the idea of having a right and a left together, but I don't think it's the end all. Ultimately, the two guys who are playing the best will go out there. Of the eight defensemen we have, I can't guarantee there will be four rights and four lefts. But I do believe there are advantages of having rights play with lefts in a game. On the bigger [international] ice maybe a little bit less; there's more time for them to get a pass off. It won't be the final factor but it does come into our decision-making.

Lefty Duncan Keith is the only real lock, presumably leaving at least two spots open on Canada's left side. It's likely Jay Bouwmeester, paired with Pietrangelo on St. Louis' formidable blueline, Seabrooks his way onto the team. But who grabs that remaining spot? Dan Hamhuis is certainly a contender, although he's had an inauspicious start to this season. Marc Staal just hasn't been the same since sustaining a concussion two years ago and is further compromised by the eye injury he was dealt in early March. Veteran Kings rearguard Willie Mitchell missed all of last season with a knee injury. It isn't hard to see Vlasic donning Team Canada's unfortunate uniforms next February and it will be even less difficult if he keeps playing like he has through five games of the regular season.

But regardless of whether Vlasic does suit up for the Canadians in Sochi, the Sharks are more than satisfied that he'll be suiting up for them for the remainder of the season and at least four more years after that.