Does goalie fatigue play a role in the shootout?

In which a hypothesis I thought might be stupid from the start turns out to be even stupider upon closer examination.

Share All sharing options for: Does goalie fatigue play a role in the shootout?

I know you've all been dying for some more shootout analysis, which is why I'm bringing you another take on the hallowed skills competition. First, here's a little background on where this question came from.

Over the past three or four years I've seen more hockey games with my brother than I've watched by myself. While watching the Sharks we came to "know" certain things about hockey. Things like Ryane Clowe is going to take a bad penalty if Logan Couture gets hit, if there's a guy on the other team without a goal he's getting one tonight and the better goalie in the game always loses in the shootout.

None of those are empirically true -- they're just the kind of observations based on selective memories you get while watching sports. While the first two are most certainly not true, I always wondered about the last one. Is there anything to the idea of goalie fatigue? After you've faced 40 shots during gameplay, how much do you have left in the tank for a shootout, particularly if the other goalie is fresher than you?

I tweeted this last night to the lovely @FirstHeart42 last night and she asked if "that's a thing?" Well. Only one way to find out!

I went through the last 200 shootouts to find out. First, I did not include any games where a goalie was pulled -- if a netminder wasn't in there for the whole 65 minutes, it kind of defeats the purpose. I also threw out the five or six games where both netminders had the identical number of saves. 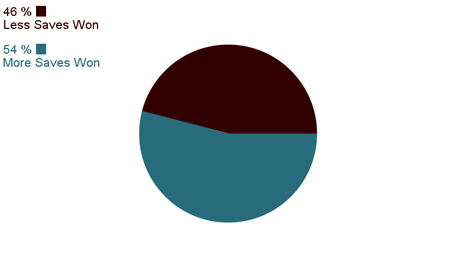 So not only was my initial hypothesis definitely not true, it appears that there is no impact whatsoever in the shootout. This probably doesn't surprise anyone; the shootout really is a glorified coin flip, after all. At the very least, it's not impacted much at all by goalie fatigue -- these guys are professional athletes, as it turns out.

My initial hypothesis probably comes from the following: The Sharks typically outshoot their opponents and as I laid out the other day, Niemi is very good at the shootout and the Sharks have done well in the shootout in the past few years. Therefore, Niemi has almost always seen fewer shots and usually wins the shootout. You thought this would be great statistical analysis, but instead it's a psychological study into where selective memories come from! Ha!

In the past two years there have been 282 games decided by the shootout. That's 282 too many if you ask me!

Seriously though, have I ever told you guys how much I hate the shootout? I really hate it. That must be why I've written over a thousand words on it in the past week.