Justin Braun and Joe Pavelski gave us a possible taste of Team USA's Olympic squad four months early on Sunday afternoon in Ottawa. We break down their brilliant goal.

Joe Pavelski is a lock to feature prominently on Team USA's entry to the hockey tournament at the 2014 Winter Olympics in Sochi, Russia. His Sharks teammate and countryman Justin Braun is decidedly less of a sure thing to be named to that roster, given that he was not among the eighteen defensemen USA Hockey invited to its orientation camp over the summer. But if Braun wasn't on the radar of David Poile, Dean Lombardi and company before, he certainly is now after a splendid start to the 2013-14 season which has seen him excel in shutdown minutes on the blueline of the best team in the NHL. While Braun generally draws accolades for his work in his own end and in moving the puck out of the defensive zone, he showed on Sunday afternoon against the Senators that he's just as capable of creating off the rush. Here's one of the prettiest passing plays the Sharks have concocted all season (with another American hero in Tommy Wingels starting things off):

I thought it would be worthwhile to break down just how Pavelski got so open in front of a gaping net and how Braun became involved in this play in the first place. 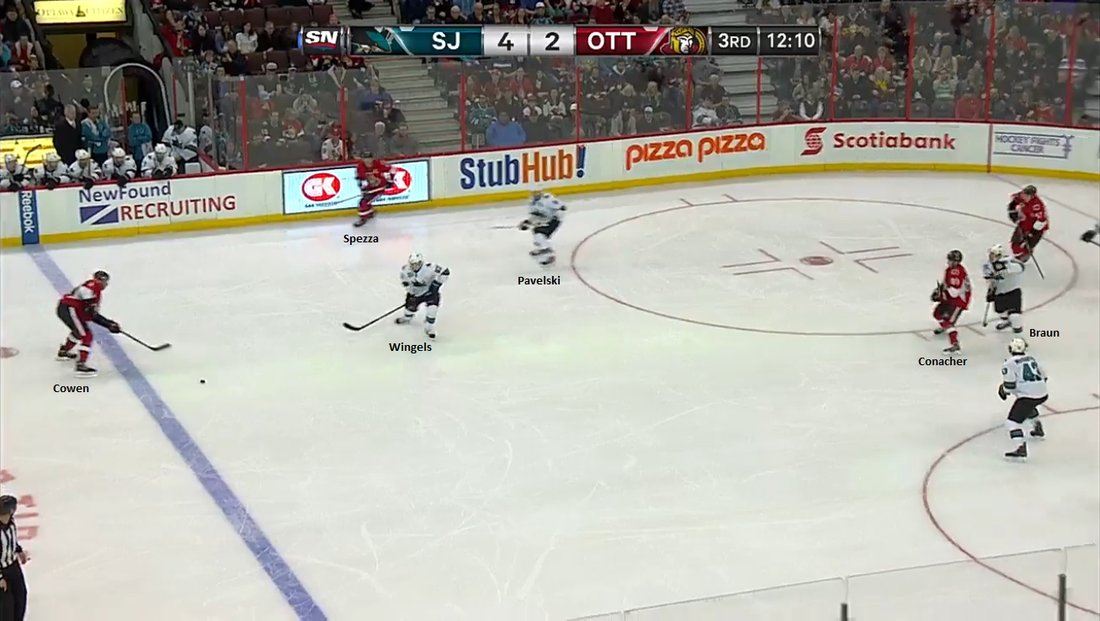 We'll pick this play up in the Sharks zone, with the Senators pressing while down two goals in the third. Jason Spezza attempts to set up Jared Cowen for a one-timer but the Ottawa defenseman shanks it, allowing the puck to skitter free towards the near-side boards. Wingels pounces, with Pavelski and Braun set to get off to the races. 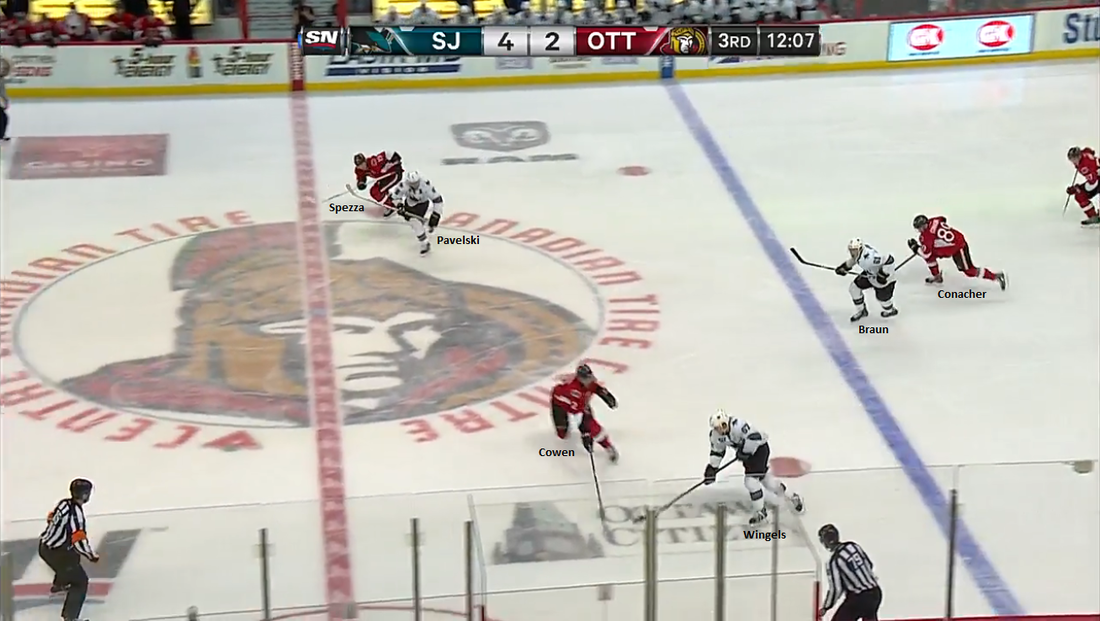 Spezza does a decent enough job on the backcheck but the key for the Sharks here is that Pavelski is able to gain inside position on him, significantly increasing the odds Wingels' backhand pass through the neutral zone won't just end up a turnover to the Senators' top scorer. That subtle play by Pavelski is likely the difference between this sequence yielding a scoring chance and Wingels being forced to harmlessly dump the puck in with no passing options. Meanwhile, Braun has a step on Cory Conacher. 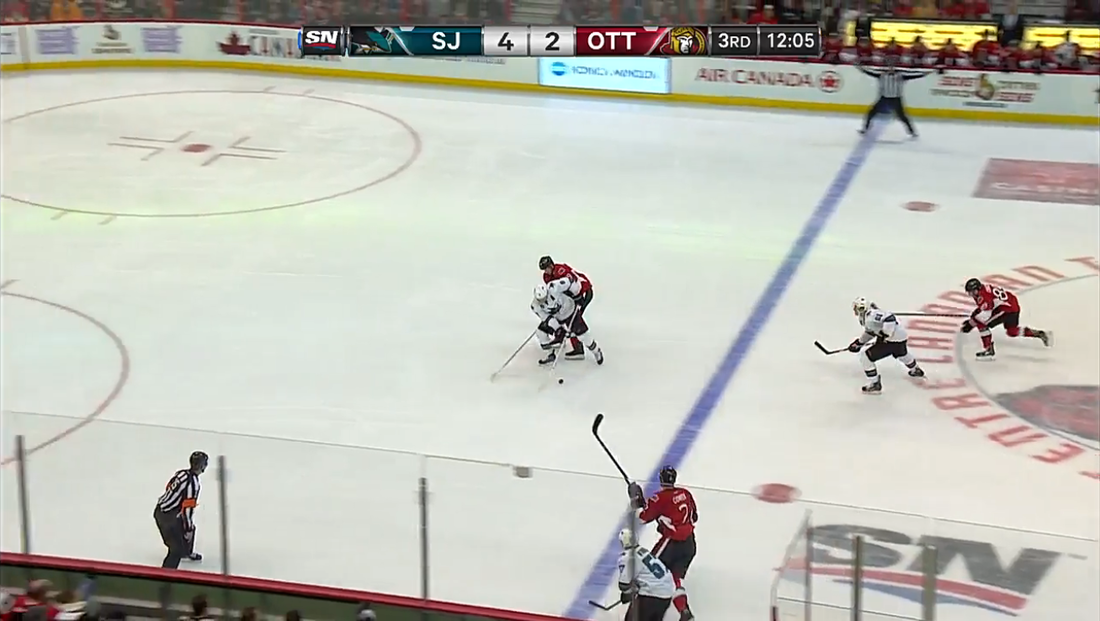 Pavelski receives Wingels' pass and continues to use his body positioning to shield the puck from Spezza. Here's where things start to get interesting. When I saw this unfold live I assumed Pavelski just had eyes on the back of his head. While it's still an impressive display of vision, you can clearly hear an audible "JOE!" in the highlight clip above as Braun calls for the puck. Pavelski gets it to him before continuing to drive the net and the Sharks have a partial odd-man rush from the top of the faceoff circles in. 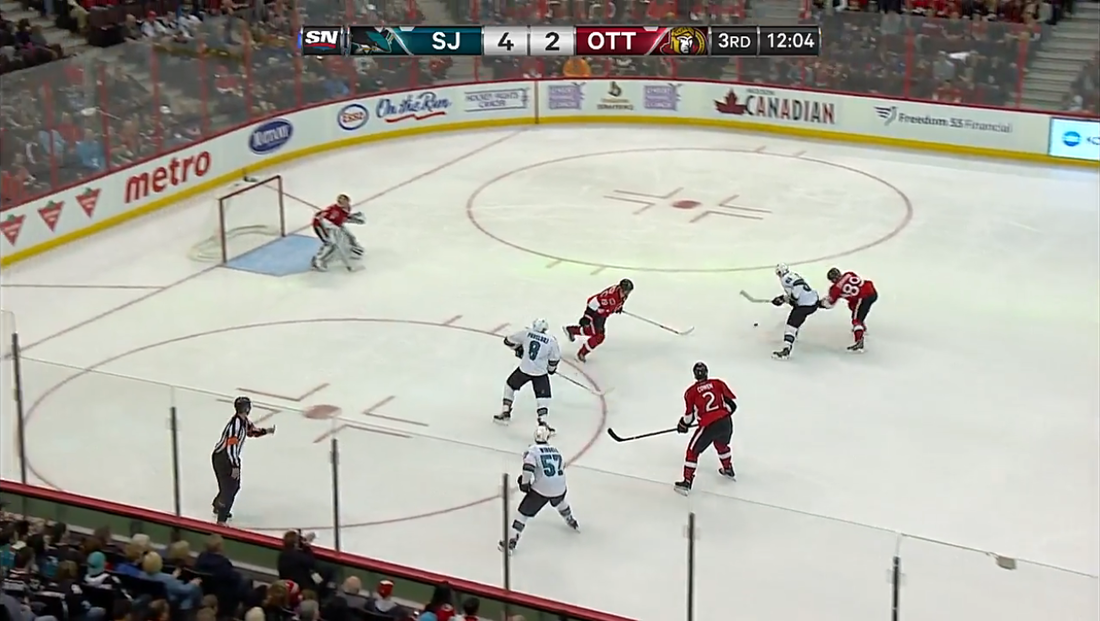 Rather than trust the speedy Conacher, who has made up a reasonable amount of ground on the backcheck at this point, to impede Braun enough to deny a quality chance on net, Spezza leaves Pavelski all alone and attempts to take matters into his own hands. 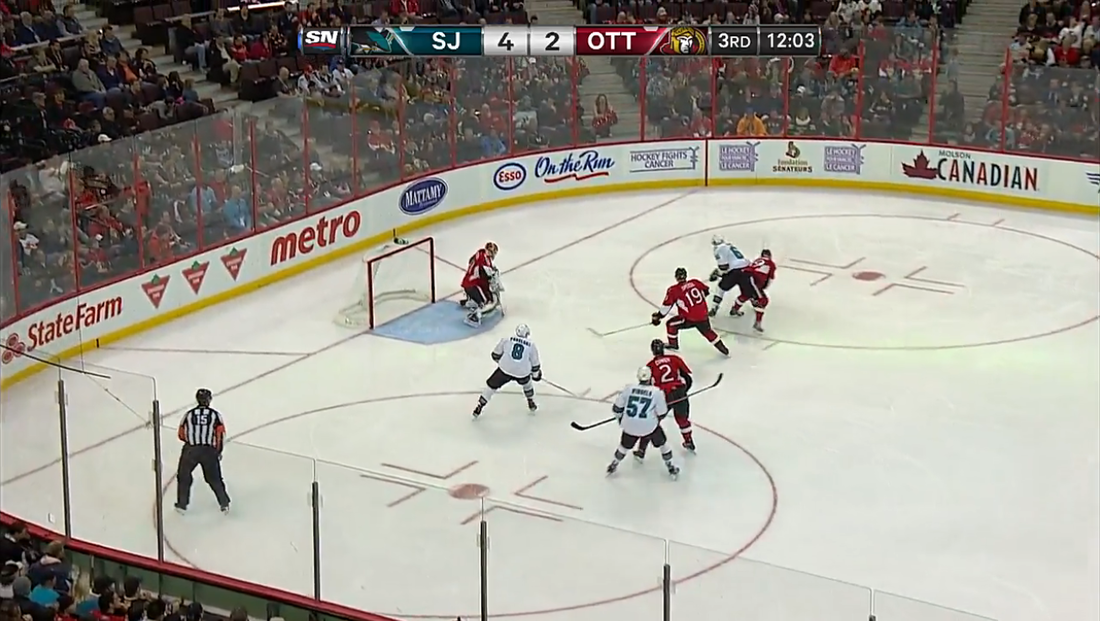 Unfortunately for the Senators, Spezza can't get a body or a stick on Braun, who successfully fends off Conacher to retain possession. It's jarring how wide-open this leaves Pavelski ten feet from the Ottawa net and Spezza's stick isn't positioned well enough to take away the passing lane through the slot. 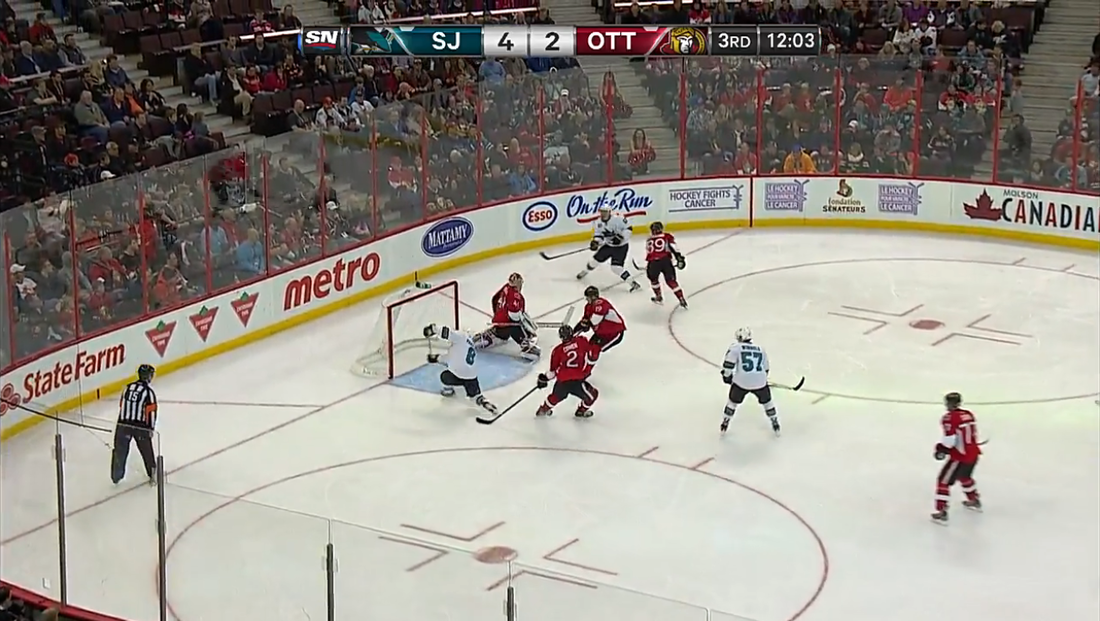 A fact which Braun promptly exploits with an unbelievable, needle-threading feed to the unguarded Pavelski for a tap-in goal.

The way this play developed reminded me of comments Todd McLellan made prior to the start of the season about how the Sharks intended to improve on their woeful five-on-five offense:

The biggest thing for me is when you get your two-on-ones or three-on-twos, and those are pure scoring chances, we need to take advantage of them. We really do. We had a number of those throughout training camp and exhibition season where we didn’t take advantage of them. We got cute, we got fancy, and got nothing out of it. If we’re going to improve five-on-five scoring, those legitimate moments that arise, maybe only one or two times a night, we better be cashing in on them.

They certainly cashed in here and have been doing so with more frequency through the first month of the season. But the mere fact that they were able to generate this chance, courtesy an activated defense and quick, three-way puck movement, is a significant change from last season, particularly their pre-trade deadline performance. With a newfound emphasis on transition play and the pieces in place to implement it, Braun should get plenty of more opportunities to join the rush and make things happen. With enough plays like this one, in addition to a continued steady presence in his own half of the rink, he might even get the chance to set up Pavelski for a couple of goals in Sochi.