Can you burn out a netminder with too much regular season play?

Do goalies play poorly when asked to start a high volume of regular season games?

Share All sharing options for: Can you burn out a netminder with too much regular season play?

As the resident Fear the Fin Goalie Expert, I'm taking a crack today at goalie fatigue as it relates to postseason play. It has been suggested that playing a lot of regular season games could burn a goalie out when it comes to be playoff time; this isn't exactly a stretch: The more games you play the more tired you get. Certainly this affects some netminders more than others, but is there a discernible pattern amongst goalies who play a certain number of regular season games?

For this experiment I set the threshold at 65 games. I pulled up a list on hockey-reference of every netminder who played 65 games in a season going back to 2000-01 and narrowed that down by looking only at the goalies who also played in the playoffs that year (obviously). From there, I had a sample of 60 netminders -- it's not a huge sample by any means, but I figured that 10 years of data ought to get the job done.

It is interesting to note that in the 10 seasons included (two seasons omitted from the data because of Bettmans lockouts) only 60 goalies have both played 65 games AND played in the playoffs. That's just six netminders a year! I assume (and could be wrong) that better teams don't have to lean on their goalies so much to get the job done and thus don't have to play them 65 games. Unless you're the Sharks, in which case aw screw it, just play Niemi 75 games.

So it certainly appears that playing in a lot of regular season games hurts playoff performance, but this is a binary way of looking at it. How much worse to goalies play, on average? If you already opened up my spreadsheet you may have seen that netminders were, on average, .00492 percent worse after playing 65+ regular season games.

I also calculated the standard deviation of this data -- that came out to 0.0223 percent. You can see some sweet charts below because one can never have enough pie ... charts or histograms! No, no, it's a chart, not a medical procedure. I think. 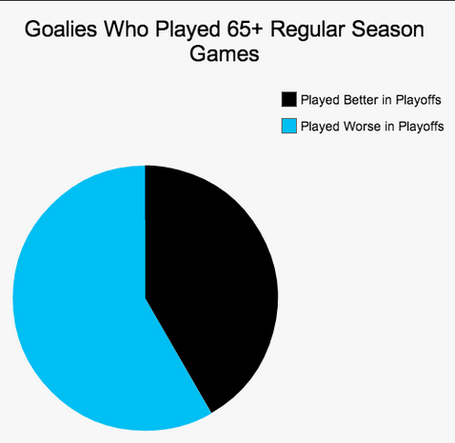 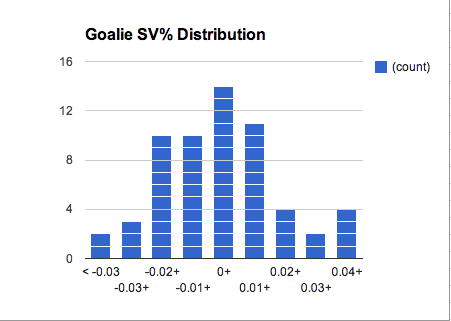 I could easily add more seasons to increase the data pool (time consuming, not difficult), but I think this adds some credence to the idea that playing a goalie a lot can adversely affect him in the playoffs.

The tl;dr version is: Hey Todd, maybe give Niemi a breather here and there so he doesn't turn into a pile of ash during the playoffs, alright?

From the lovely Megalodon's suggestion in the comments I added another column to the spreadsheet (same link as before). The new column shows the save percentage of the netminder against playoff teams from that season. Because no hockey stat databases have "SV% against playoff teams" in their season-by-season splits I had the rare opportunity of manually adding them to the spreadsheet. I earned my keep on the data-entry-monkey wagon this week.

If you went straight for the data, you already saw that the average differential dropped from .00492 percent worse in the playoffs to .00287 worse. When you're talking about tight numbers like this, 2 percent is substantial and in retrospect not surprising.

Perhaps a little less important is that 30 out of the 60 netminders actually played better in the playoffs than they did in the regular season while the remainder (with the exception of friggin Nabokov in 2001) played worse. I say less important because the degree to which they played better or worse is (at least in my mind) important. Feel free to tell me why I'm wrong and the worst.

Here are the same graphs as before to illustrate the differences. Oh, and the standard deviation for the scores stayed roughly the same (.223 to .230). 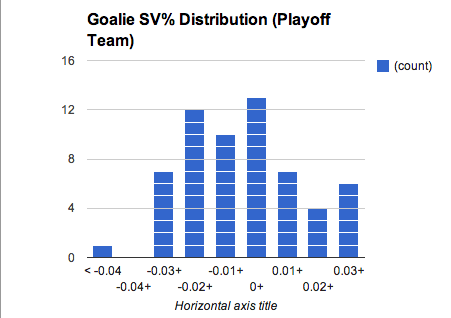 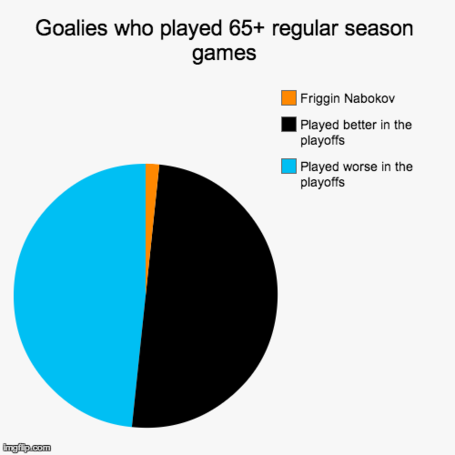 Final Update: It took some time, but I ran the numbers for the less-used goalies to give us a comparison point or a "control" for the numbers I picked up previously. Here is the link to the spreadsheet so you can see the carnage for yourself. The pertinent numbers are below:

56 percent: The number of goalies who performed worse in the postseason than they did in the regular season.

-.00659: How much the save percentage of goalies dropped heading into the playoffs. This is compared to the -.00492 difference present in the first study.

.02086: The standard deviation of the difference between playoff and regular season save percentages.

My final takeaway is that it appears that save percentages in general are lower in the playoffs than they are in the regular season. The most accurate way to compute this would be to take straight shot data and run the numbers -- that's not something I have access to. So if someone with access would like to run those numbers, that would be very helpful.

As it stands from the data above, my conclusion is that the number of games a goalie plays doesn't have much of an impact on their play in the playoffs. Let me know if you have anything else to add and feel free to suggest other places this data or these ideas could take us. Thanks for following along!