Our look at the head-to-head, team totals and on-ice scoring chances from the Sharks' 4-1 win over Vancouver in the regular season opener.

Share All sharing options for: Scoring Chances: Game 1 vs. Vancouver

From offensive zone entries to defensive zone exits to open play data, there have been a number of breakthroughs in hockey analytics over the past year and change. "Advanced" hockey stats have also started to gain traction in the mainstream media (here's a NHL.com piece that went up this morning comparing Stephen Weiss and Valterri Filppula's Corsi percentages over the past four seasons) and teams have increasingly begun hiring and consulting with analytics experts to make decisions. New metrics offer boundless possibilities for learning more about the game but one fundamental stat upon which much of modern hockey thought is built is scoring chances. They've been around for decades and remain an accessible tool that paints the picture of a game and distinguishes between the signal and noise of player performance beyond the basic stuff included in a box score.

What constitutes a scoring chance is a bit subjective and tends to differ depending on who's counting them. Essentially, I record a play as a "scoring chance" when it involves an unblocked shot attempt from the bounded area of the ice seen in this diagram. However, if there's a substantial screen or a considerable amount of puck movement that causes the goaltender to move laterally preceding the attempt, I'm usually more lenient with the location. While chances generally line up with shot plus-minus, or Corsi, in the long run, shot quality can play a significant role in determining single-game outcomes. Scoring chances essentially operate as a check on Corsi to verify whether the team generating more shots in a given game, or over a series of games, is getting those shots from dangerous locations. At the single-game level, I think it's the more valuable metric and it's certainly far more valuable than traditional plus-minus. Without further ado, here's the scoring chance data from the season opener: 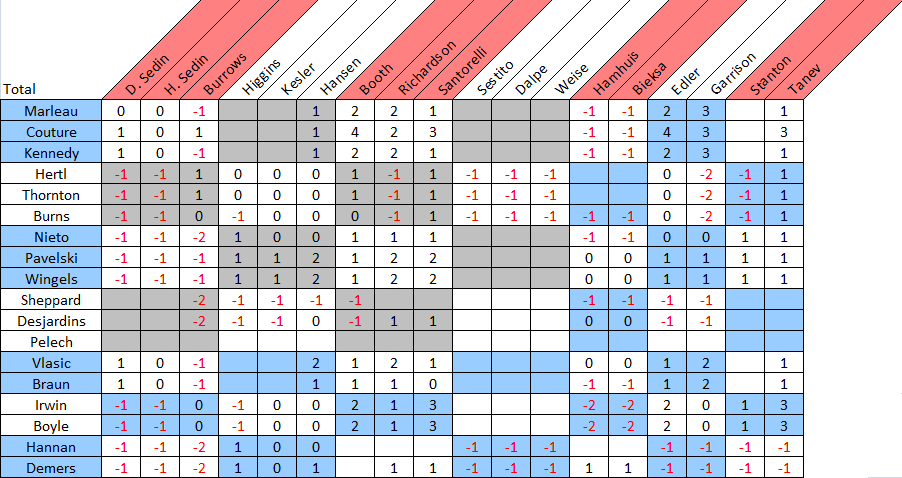