Sharks vs. Devils: Hertl vs. Jagr

Tomas Hertl goes head-to-head against his childhood hero and NHL legend Jaromir Jagr as the Sharks host the Devils in game two of the homestand.

Share All sharing options for: Sharks vs. Devils: Hertl vs. Jagr

The real fun begins later this week when the Sharks host the Kings, Blues and Ducks over a four-day span but Game 2 of San Jose's five-game homestand features an opponent having a good deal of success in their own right. After losing Zach Parise, Ilya Kovalchuk and David Clarkson to a combination of unrestricted free agency and fake-retirement over the past two summers, the New Jersey Devils weren't expected to be all that competitive this season. But they were never quite as bad as their record indicated a season ago and the Eastern Conference has been nothing short of a punchline so the Devils currently find themselves in playoff position in the East, sitting third in the hilariously inept Metropolitan Division. Alongside the Pittsburgh Penguins, they're also one of just two clubs from the weaker conference to place among the top ten teams league-wide in score-close shot differential.

That combined with terrific goaltending from both offseason acquisition Cory Schneider, making his case for inclusion on the Team USA Olympic roster with a sparkling .925 SV% on the season, and the apparently reanimated corpse of Martin Brodeur has allowed the Devils to win games despite a largely impotent offense. They're looking to complete the rare California hat trick tonight after the ageless Jaromir Jagr led them to overtime victories over the Ducks and Kings earlier in the week. Speaking of Jagr, one of the coolest storylines this game has going for it is that it represents the first time Sharks rookie Tomas Hertl will go head-to-head against his boyhood idol, the greatest player to ever come out of Hertl's home country of the Czech Republic. I kind of wonder if Jagr is aware that this is a thing that happened: 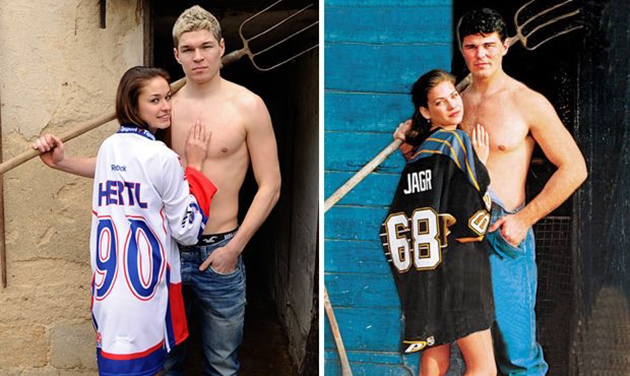 Before the season started, I doubt Hertl expected to be tied in scoring with Jagr 22 games into his NHL career but here we are. Like Hertl, Jagr has 18 points in 22 games and, also like the kid who was negative-three years old when the Pittsburgh Penguins drafted Jagr in 1990, the future Hall-of-Famer has done the bulk of his damage at even-strength, with all nine of his goals (including his 3-on-3 overtime winner in Los Angeles on Thursday) coming in even-up situations. Jagr has been the engine driving a Devils offense that sputters when he isn't on the ice. At five-on-five, New Jersey sees 56.7% of all unblocked shot attempts go in their favor when Jagr is on the sheet compared to just 50.4% when he's off it. If the Sharks can contain him, they'll have a good shot at improving to 2-0 on the homestand, especially if Hertl and his linemates can have a more effective showing than they did against the Lightning, with Brent Burns set to play in his second game back from injury.