Sharks vs. Sabres: How bad is Buffalo?

Share All sharing options for: Sharks vs. Sabres: How bad is Buffalo?

If you were to intentionally design an experiment to see how lopsided the final score of a single game could be in the parity-driven NHL, you could do a lot worse than pitting the Buffalo Sabres (whose minus-23 goal differential and minus-171 shot differential are each the worst marks in the league) against the San Jose Sharks (whose plus-26 goal differential and plus-177 shot differential are each tops in the NHL) at the Shark Tank, where San Jose is 5-0-1 and has just two regulation losses in thirty tries dating back to the start of the calendar year. Throw in the fact that the Sharks are nearly healthy for the first time this season, save Brent Burns, while the Sabres traded their best player in Thomas Vanek a week ago, meaning their putrid numbers may actually flatter them at this point, and you've got the makings of a bloodbath.

Granted, both of these teams know all too well that things rarely turn out the way they look on paper in the NHL so it's entirely possible we're in for a tightly-contested matchup ending in a shootout. But I wouldn't bet on it. As dominant as the Sharks have been through a month and change of this season, the Sabres have been just that awful. In the six NHL seasons for which shot differential data is available, no team in the league has ever earned less than a 40% share of the five-on-five shot attempts in their games with the score close. Courtesy a lineup featuring four teenagers in over their heads, about three real defensemen and a first line centered by Cody Hodgson, the 2013-14 Buffalo Sabres are on their way to making recent NHL history. Through 16 games, the Sabres' percentage of score-close shot attempts stands at a ghastly 38.1%, three percentage points shy of the full-season low set by the 2007-08 Atlanta Thrashers. Yesterday, Travis Yost of NHL Numbers detailed how the Sabres have been tracking in overall five-on-five shot differential thus far compared to that legendarily awful Thrashers team: 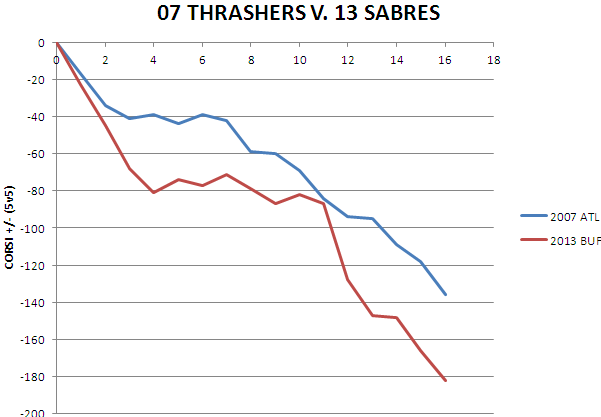 Ugly stuff. While I'm not sure the Sabres can remain a sub-40% possession team over the long haul, they do have pieces left to sell off prior to the deadline (not to mention Ryan Miller and his .919 SV%'s inevitable departure will tank their goal differential even further), so anything is possible. There are a variety of reasons why the Sabres are this bad, including their insistence on several players who can't legally purchase alcohol playing significant minutes, Tyler Myers turning into a pumpkin and the trading away of the entirety of what was their top line the last time these teams met (although GM Darcy Regier did receive a pretty good haul for Vanek and Jason Pominville). But a lot of it boils down to a hilarious fetishization of grit and team toughness at the exclusion of skill.

Overreacting to Milan Lucic's running of Miller, the Sabres made moves as ridiculous as trading their first-line center in Derek Roy for Steve Ott (before later naming him captain) and giving John Scott a regular lineup spot while ridding themselves of "soft" players (who, incidentally, can actually play hockey) like Brad Boyes, Nathan Gerbe and Andrej Sekera. There's nothing inherently wrong with toughness but when you prioritize it over talent, you become...well, you become this year's Buffalo Sabres. As long as the Sharks show up to the rink tonight, these should be their two easiest points of the season. There's a distinction between being tough and being tough to play against. The Sabres might be the former but they sure as hell aren't the latter.