Sure, the Sharks' loss to the Sabres was frustrating on a bunch of levels. But it did give us one of the funniest visuals of the NHL season.

There weren't a lot of positives for the Sharks in their 5-4 shootout loss to the worst team in hockey on Tuesday night. Between San Jose being handily outplayed during the second period to eventually giving up four goals and thirty-six shots to a historically awful opponent to being robbed of the overtime winner, it's likely a game most would prefer to forget (of course, the NHL's war room in Toronto did so before the game was even over). But it did provide us with one of the more hilarious and memorable images of the season thus far so we might as well break down how Tomas Hertl's game-tying goal was created in part by three Sabres swarming Joe Thornton like it was a Peewee game. 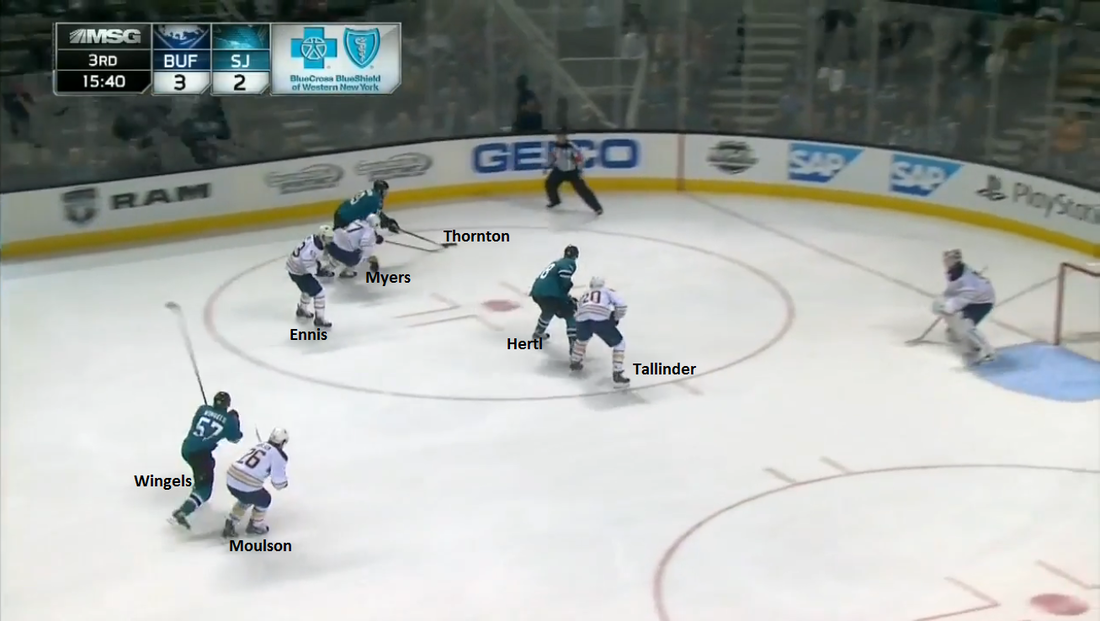 We'll pick this play up with Thornton having just gained the Sabres blueline with possession following some nice work in the defensive zone by Scott Hannan and Tommy Wingels to strip the puck from Tyler Ennis and start the breakout, respectively. Although Thornton has a half-step on Myers, the Sabres are in pretty good position here. Henrik Tallinder has effectively negated Hertl as a passing option, Matt Moulson has the trailer Wingels covered and Ennis is in place to help out in case there's a breakdown. 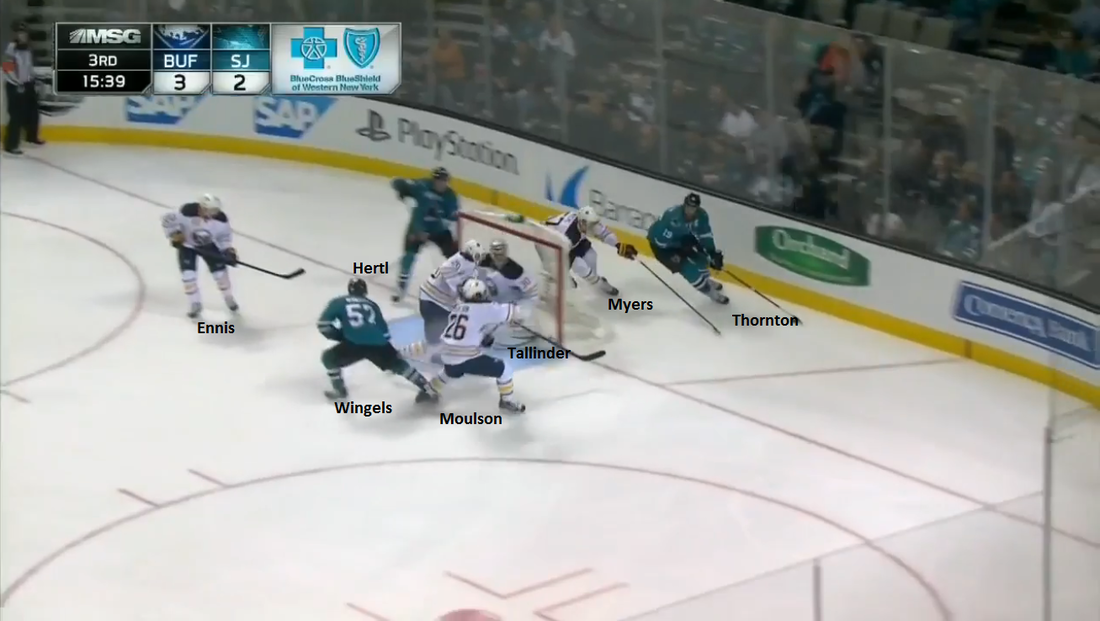 As anyone who's seen a Sharks game in the past eight years could have predicted, Thornton swoops around the net but this remains a fairly well-defended play by the Sabres. Myers is playing the mirror game against Jumbo and Moulson appears to have Wingels' stick tied up in the crease. Seconds later, all hell breaks loose: 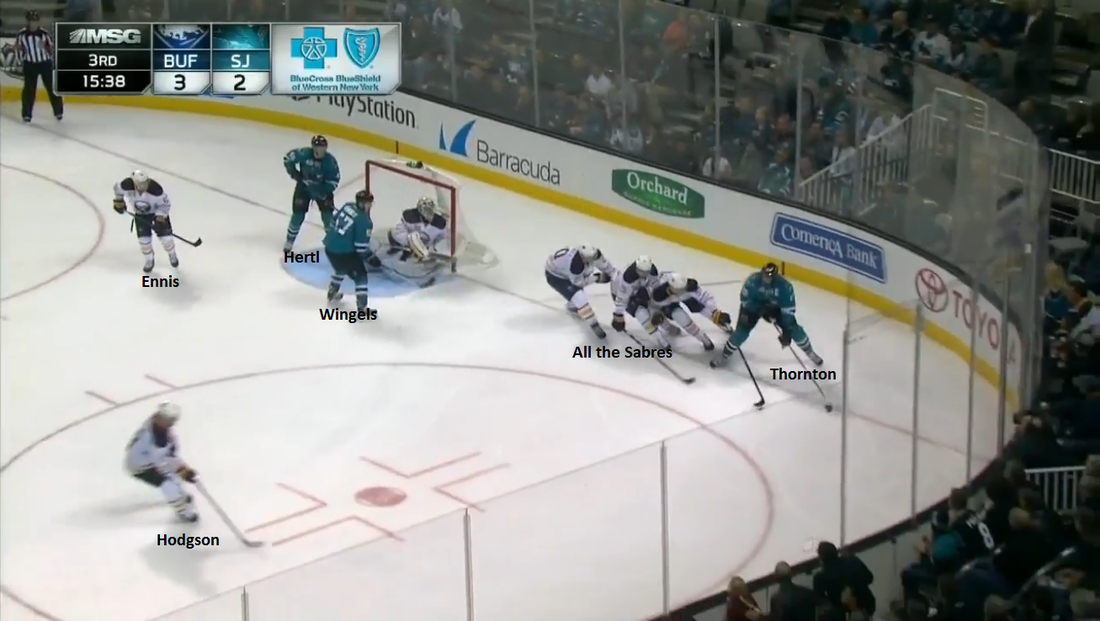 Three of the five Sabres on the ice inexplicably converge on Thornton for one of the most bizarre-looking visuals I've ever seen in a professional hockey game. Twitter's Cam Charron mentioned that it looked like Samus' speed booster from Metroid Fusion and I can't do any better than that for an analogy. This, of course, leaves Ennis on his own to deal with not only the two forwards in the crease but the weak-side defenseman in Hannan. With the slot entirely vacated, Thornton makes one of the easier passes of his career to Hannan. 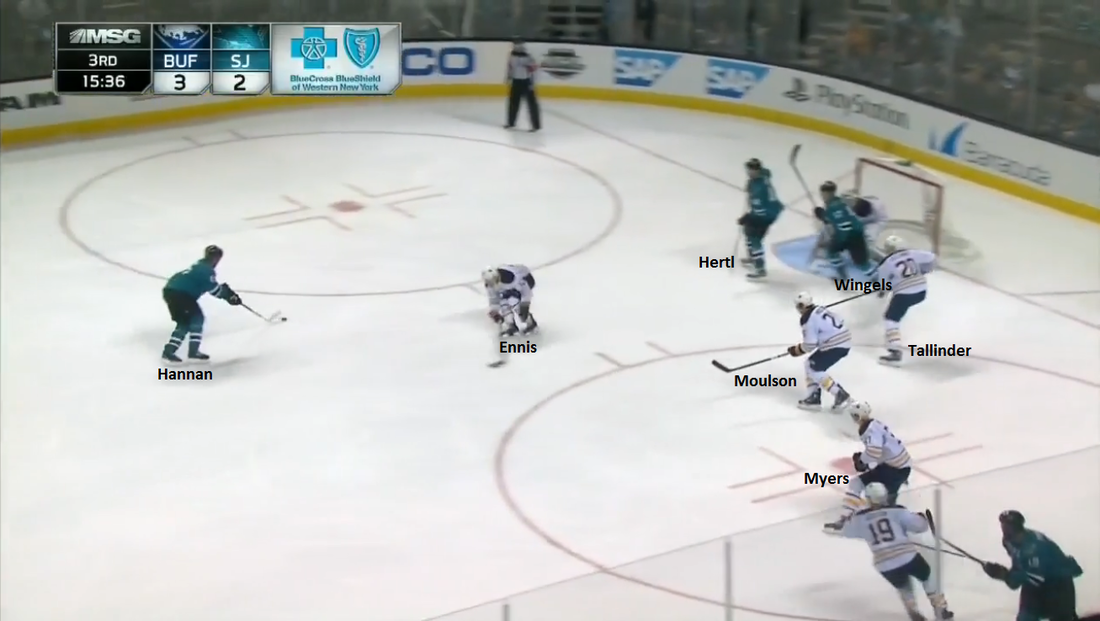 poor_tyler_ennis dot jpg. You can almost hear him mumbling "for fuck's sake" as he attempts to close the gap on a wide-open Hannan, in the process leaving Hertl and Wingels all by their lonesome and in Ryan Miller's grill as the Sabres scramble to get back into position. Hannan takes a while to settle the puck down, because he's Scott Hannan, so Ennis eventually recovers somewhat but not to the extent that he's able to impede Hannan's shot, which the Sharks defenseman gets through to Miller courtesy an empty shooting lane. 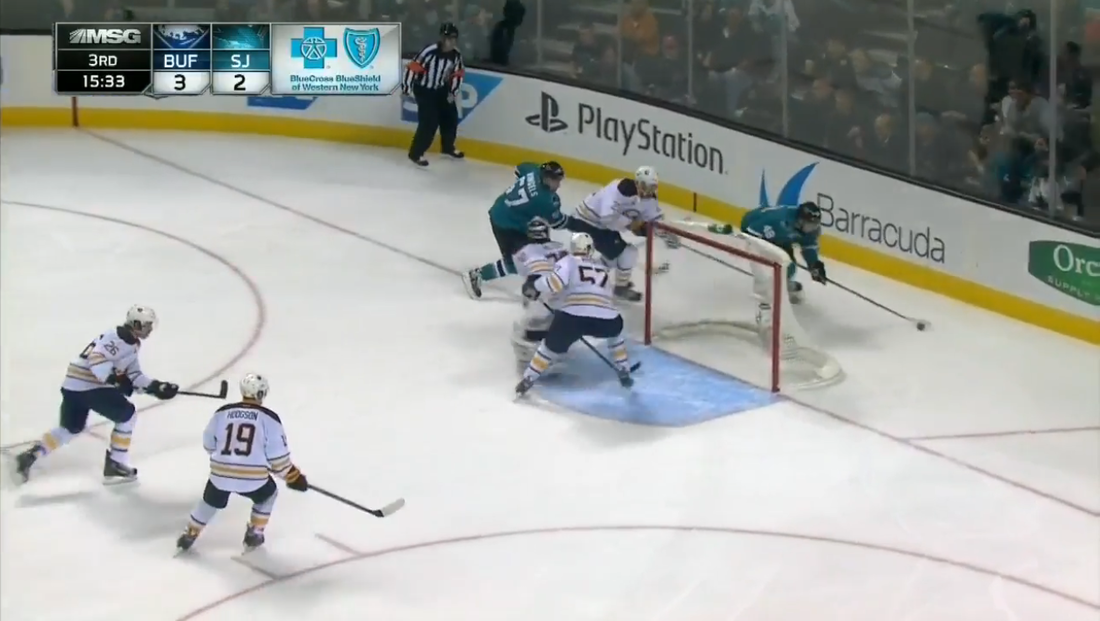 Miller stops the initial shot from Hannan but Hertl collects the rebound from the front of the net and is thinking wraparound all the way. Miller doesn't play this particularly well, taking too long to push off and get across the crease, but Myers is even worse here. Job one for him should be cutting off Hertl's path to the front of the net but instead he just looks dazed. It also doesn't exactly help Miller that a 6'8" dude is standing between him and the far post. 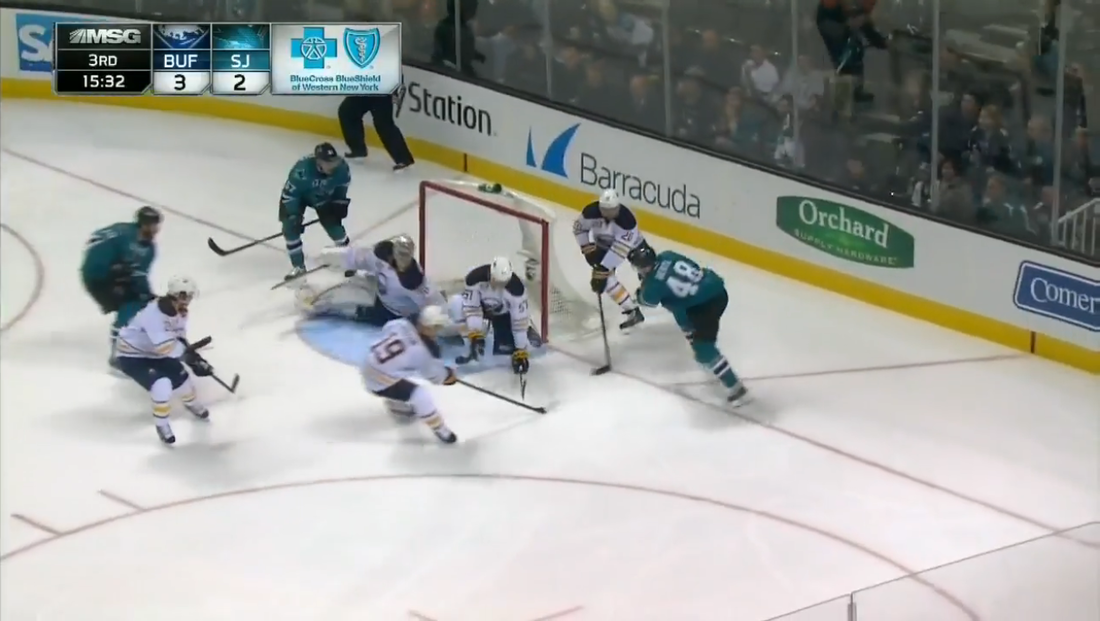