Crash Course: Cimino leading the Spartans in more ways than one

San Jose State hockey will face its toughest tests of the year so far at Sharks Ice this weekend. The Spartans host the 7th Annual Mid-State Electric Best of the West Showcase and will face #2 Northern Arizona, #6 San Diego State, and Oregon. With these tough opponents coming in, SJSU will need a great effort from everyone in the lineup. But that starts at the top with the captain, Sam Cimino.

Share All sharing options for: Crash Course: Cimino leading the Spartans in more ways than one

The Spartans found themselves ranked ninth in the ACHA West in the first ranking period of the 2013-2014 season. Despite a 7-1 record, the level of competition SJSU has faced has not been elite. And with a loss to unranked Long Beach State two weeks ago, the Spartans may be lucky to be as high as #9.

"I didn't think we belonged out of the rankings, but I guess you can't really put us any higher than nine or ten judging from the teams that we've played," said forward Sam Cimino.

Cal State Northridge and Long Beach both received votes in the ranking, but neither cracked the top 15. And it doesn't help that four of SJSU's wins this year came against Division 3 teams (instead of SJSU's Division 2 level).

The last of those four wins came last weekend against Santa Rosa Junior College. In an occasionally chippy game, the Spartans dominated the first thirty minutes or so and had a 5-0 lead. In the latter half, they were very sloppy, but held on to win 5-3.

One of the players who continued to impress, however, was Sam Cimino. He'd complete his hat-trick six minutes into the second period before trying to get a little fancy. And it was nearly spectacular. 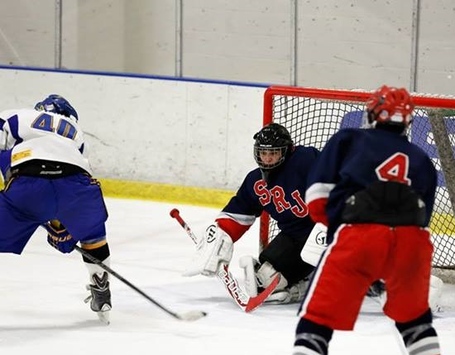 Taking his cue from the Sharks' Tomas Hertl, Cimino tried to get goal number four on a shot from between his legs. "Matty [Nicholas Matejovsky] poked it and it happened to go right to me," said Cimino. "I got a decent shot off." Unfortunately for Cimino (and for the SJSU highlight reels), he said he didn't lift it quite enough and it was snagged out of the air by SRJC netminder Troy Tennison. "It was the right situation," said Cimino. "It's not something that I would try to put myself into doing, but I just thought I'd give it a go."

Highlight reel goals are no stranger to Cimino, however. Thanks to his offensive prowess, Cimino is unquestionably one of the top hockey players in San Jose State history. Through 131 games, Cimino's 122 goals rank second only to Spartan great Sean Scarborough. And his 238 points rank him third behind Scarborough (308) and Andy Dickerson (270).

"I wish we could play a few more games and I could maybe catch Scarborough," said Cimino. "It'd be really tough to beat him, but I feel like I can at least catch Andy, and that'd be nice to do."

It will be very interesting to see where he finishes. In 7 games played this season, he leads the team with 14 goals and 21 total points - a gaudy 3 points-per-game average that's nearly twice his career pace. SJSU has 22 games left in the regular season. Getting 33 more points in that time is doable, but it will be far from easy against some tough competition on the Spartans' schedule. But Cimino isn't making this about himself.

"It's my last season and it wouldn't matter to me if I broke every record that there was," said Cimino. "If we make it to Nationals, that'll mean more to me than any of that."

The road to the postseason starts now.

The Spartans will get to face a big measuring stick on Friday at 7:30 pm when the #2 Northern Arizona Ice Jacks head to Sharks Ice. "The NAU game is going to be huge," said Cimino. "They've always been a tough opponent, and now they're even better this year."

Things don't get much easier for SJSU on Saturday night at 7:00 pm when they square off with the #6 San Diego State Aztecs. Cimino called the Aztecs the "biggest rival we have," and it's hard to argue with him. SJSU and SDSU seem to perennially be the top teams from California. And the rivalry intensified last year when the Aztecs knocked the Spartans out of the playoffs.

Finally, the Oregon Ducks will finish off the weekend with SJSU on Sunday at 3:15 pm. Although the Ducks were not ranked, they have built a solid team in recent years that could easily crack the top 15. A win against the Spartans would certainly help them get there.

But the Spartans hope that they're the ones using the weekend as a springboard. Cimino said this is a great chance for SJSU to jump in the rankings:

"A lot of people didn't even have us in the top ten, and I think this is a really big weekend to show them that they didn't know what they were talking about.. We definitely belong in the playoffs."

With two big road trips before the semester break, this is actually the last chance to see the Spartans at home until January! Tickets are available at the game. Friday and Saturday's games will be on the north rink of Sharks Ice, while Sunday will be over on the east rink. All three games will be streamed with video and commentary by Black Dog Enterprises.

The Spartans are holding a 'teddy bear drive' for Saturday's game. If you show up to the game and donate a teddy bear, you can get in for half off. The SJSU players will be donating the stuffed animals to a childrens' hospital later in the year.